• DPP Noordin Haji says in a letter that he will recommend a foreign agency be joins the investigations to alley fears the murder case was being bungled.

• Haji has requested Mutyambai to forward his input in his suggestion or objection to the initiative. 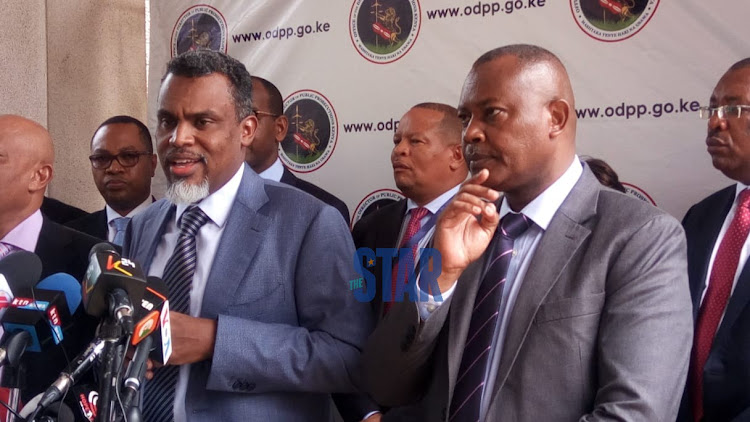 The Director of Public Prosecutions has said he will seek a foreign investigative agency to work with the police in probing the murder of businessman Tob Cohen.

DPP Noordin Haji said in a letter to Inspector General of Police Hillary Mutyambai that he will recommend a foreign agency joins the investigations to allay fears the murder case was being bungled.

The letter received by Mutyambai’s office on Friday is dated October 7.

The move, he said, is to ensure that qualified, competent, and comprehensive investigations are carried out on the [case] and with a view of ascertaining which viable suspects, if any, who may have not been charged in court..but who have been mentioned adversely and or are persons of interest in the murder inquiry are apprehended.

Haji has requested Mutyambai to forward his input in his suggestion or objection to the initiative.

The move by the DPP is in response to the apparent unease between his office and that of Director of Criminal Investigations George Kinoti in handling the case.

Haji complains in the letter about an affidavit by police officer John Gachomo, accusing the DPP of hiding evidence that would have incriminated Court of Appeal judge Sankale Ole Kantai in relation to the murder case.

But Haji rejected push by DCI to have the judge prosecuted alongside Sarah Wairimu, Cohen's widow and prime suspect in the case.

In the Thursday letter, Haji  asks Mutyambai to explain to his office why the DCI officer disclosed in public an alleged material evidence “instead of [it] being forwarded to the ODPP for consideration and appropriate action in accordance with the law.”

Asserting that the alleged evidence has not been furnished to his office, Haji complained that Gachomo swore the affidavit yet he was never party to the case from inception as investigating officer.

Haji demands to know why he was not informed Gachomo was among those investigating the case.

Further, Mutyambai should inform him within seven days why Gachomo did not forward his statement to his office. Haji says he had sought an explanation on September 30 but nothing has happened so far.

Haji now wants the IG to have the police's Internal Affairs Unit investigate Gachomo's conduct and the resulting file sent to his office for action.

"...pursuant to article 157(4) of the Constitution, I hereby direct that you cause investigations to be carried out by the Internal Affairs Unit of the National Police Service against the said John Gachomo...," the letter reads.

Haji has also petitioned the court to be enjoined as an interested party in the case filed by judge Kantai seeking to bar his arrest by the police.

The DPP, through various prosecutors handling the case, argues that his office has been adversely mentioned and his inclusion would help in championing the cause of justice.