ODM boss has recently received endorsements from top guns around the country. 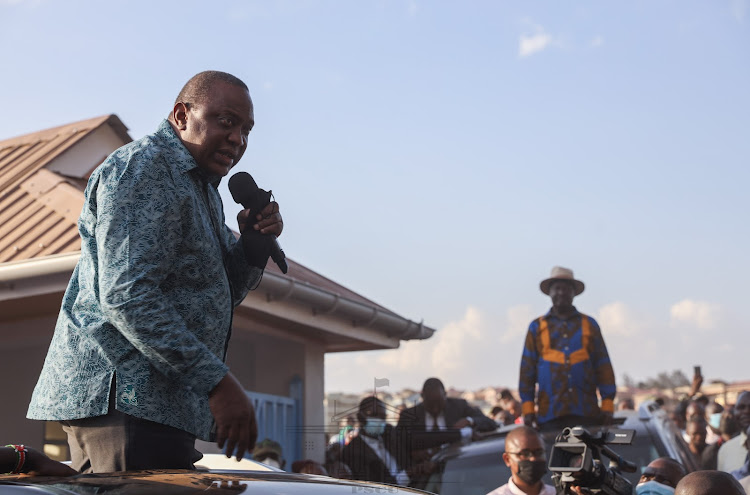 President Uhuru Kenyatta’s backing for Raila Odinga’s presidential bid has revived up his political machine and positioned the ODM leader as an increasingly formidable candidate.

For weeks now, Raila has made major strides in his quest to become Kenya's fifth president, getting the backing of top guns around the country.

Today, however, leaders from the President’s Jubilee Party, including powerful Cabinet Secretaries, have also thrown their weight behind Raila.

Even more significant is the backing of the President’s key think tank and previous campaign financiers—who are armed with their war chests.

As a demonstration of their financial might, the group's engagements with Raila were beamed live on TV from the Safari Park Hotel, Nairobi.

As of today, Raila enjoys the backing of at least 20 governors against Deputy President William Ruto’s 10. About 12 governors have yet to declare themselves.

However, Raila and the President’s wing are aggressively reaching out to the governors and key leaders in Mt Kenya East and Northeastern and on the Coast.

University of Nairobi lecturer Herman Manyora told the Star the power of the Office of the President in propelling one to power cannot be underrated.

"The huge rocks that have always been placed in the way to block Raila's ascendancy to power have been cleared. The system that had for so long denied him the presidency has cleared the way. Raila is headed for a resounding victory," he said.

With the President’s blessing, Raila is believed to have made some inroads in Central Kenya where he has the backing of at least four governors and several MPs.

On Tuesday, nominated MP Maina Kamanda told the Star the President has given the “clearest signal” about his 2022 succession. Kamanda is a close Uhuru ally.

“Raila is the man for 2022,” Kamanda declared. He has been central to Mt Kenya's offensive against Ruto.

“I doubt the President is looking elsewhere. He [the President] is actually in charge of his succession plan to hand over the country to a mature and humble leader, and that is Raila,” the MP said.

There are reports Uhuru and Raila—who are working on a coalition of their Jubilee and ODM parties—would establish a joint presidential ticket for 2022.

Wealthy businessmen from Mt Kenya under the Mount Kenya Foundation who have previously campaigned against Raila have also thrown their weight behind the ODM boss.

Raila held a meeting with the Kikuyu tycoons more than a week ago when the businessmen agreed to support him in 2022.

The so-called 'system', which Raila's allies have previously accused of rigging him out of State House, is said to be quietly favouring the ODM leader, once a fiery opposition figure.

It is no secret the President favours Raila as his successor after he strongly hinted last week that he would prefer him as the next tenant at State House to his deputy, William Ruto.

In contrast with 2017 when Uhuru-leaning big guns, including governors, campaigned against Raila, the ODM boss now enjoys massive support from top government officials.

“That is an open secret. Do you think some of the ministers you are seeing accompanying Raila would do so without the knowledge of their boss?' Kamanda asked.

The opposition chief’s 2022 campaigns have been rejuvenated by Uhuru’s efforts, especially in previously hostile regions.

Nearly all governors from Western Kenya, except Trans Nzoia's, are backing Raila.

On Monday, Raila was joined by a galaxy of government officials and heavyweights during a meeting in Garissa. This heralded a shift in the leanings of Northeastern ahead of the polls.

Governors of at least three of the region's five counties publicly endorsed Raila at an Azimio la Umoja gathering in Garissa.

It was the same picture in Raila's other unity engagements in Nakuru, Kisii, Kakamega, Mombasa and Kajiado where powerful figures have backed his bid.

The Star has established that the confidence that Raila has the backing of his handshake brother Uhuru prompted ODM deputy leaders Oparanya and Joho to withdraw their presidential ambitions in favour of their boss.

The two had initially submitted ODM presidential ticket nomination papers in what could have posed a major test for the Orange party to consolidate unity and front a joint presidential candidate.

Interior CS Fred Matiang’i, who is Uhuru’s de facto deputy after Ruto was shoved out, is among ministers backing Raila.

In a recent meeting with Kisii political leaders, Matiang’i said Kenya's future is in the hands of Uhuru and Raila. He said his own political ambitions will be guided by the duo.

The ODM boss’ imposing status has forced some of his hitherto foremost critics to join his bandwagon.

Limuru MP Peter Mwathi told the Star that Mt Kenya interests will be safer in a Raila presidency.

"We have resolved we shall support Raila," he said, adding the wave in Mt Kenya is shifting.

Kieni MP Kanini Kega, who has strongly backed Raila, said the former Prime Minister is on his way to becoming the country's next president.

"If you look at Mt Kenya, the ground has shifted contrary to the initial belief that some people had taken over the region. If you talk to ordinary people, you will realise Raila is an easy sell on the mountain,” Kega said.

Kega, who has been central to Raila’s numerous visits to the President’s backyard, is among the Jubilee MPs at the heart of Raila’s campaigns in the region.

On Friday, the Star reported that Ruto, who is irretrievably estranged from his boss, is unlikely to defeat a state-backed presidential candidate.

Former State House comptroller Franklin Bett revealed it would be nearly impossible for Ruto to beat the so-called ‘system’ or 'deep state'— a cabal of influential people who pull strings in government.

“There is no topic in the public domain [powerful] enough to [use to] run against Uhuru. Depending on how Raila runs his game, it would work for him and Uhuru will be in the background,” Bett told the Star.

The former Cabinet Minister in the Grand Coalition government of Raila and President Mwai Kibaki said Ruto has not built enough anti-establishment momentum to defeat the 'deep state'.

It has also emerged that Raila’s regional ‘Azimio la Umoja’ tours would culminate in a major jamboree later this month when he will unveil his presidential candidature.

Although described as a national unity campaign, the Azimio la Umoja platform has given Raila an opportunity to market his agenda and unveil his region-centric manifestos.

Politicians have also used the opportunity to rally support for Raila as he rejuvenates his traditional bases and conquers new territories.

The mega-regional meetings are also part of the plan by the President’s men to give the ODM boss an opportunity to counter Ruto and reenergise his party.

The businessman-cum-politician on Sunday said unlike him, Raila has become a divisive figure
Counties
8 months ago

How Raila’s fortunes are changing in Mt Kenya

The ex-PM's ecstatic reception has inspired his allies.
News
9 months ago

He said that both the rich and hustlers were also free to engage.
News
9 months ago

it is these parties that will become the eventual kingmakers in the treacherous game of Kenyan politics.
Opinion
8 months ago

Endorsements will not make anyone president, says Mudavadi

Says such validations would only make sense if they were people-backed.
News
8 months ago

He has been to Nyanza, Western, Coast and Rift Valley.
News
8 months ago
by JAMES MBAKA Deputy Political Editor
News
06 October 2021 - 06:35