Kenyatta family has 13 offshore firms, one of which was valued with assets of Sh3.31 billion. 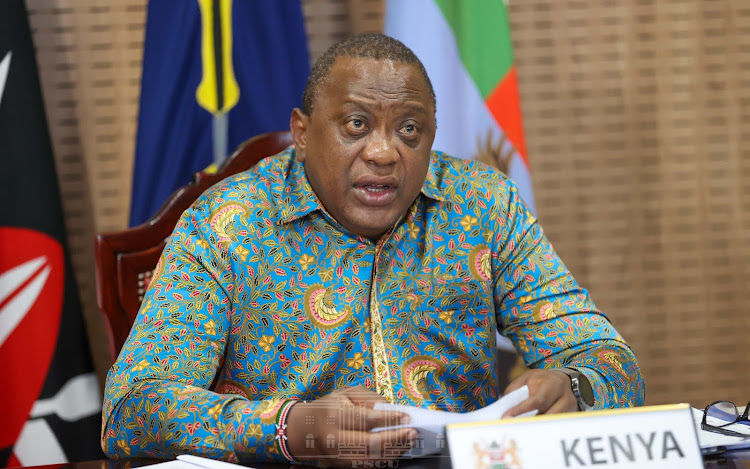 President Uhuru Kenyatta whose family's prodigious offshore wealth was exposed by a consortium of investigative journalists says he has nothing to hide.

"The Pandora Papers and subsequent follow-up audits will lift that veil of secrecy and darkness for those who cannot explain their assets or wealth," Uhuru said on Monday in a brief statement on the eve of his visit to the United States.

He promised to respond “comprehensively” on his return.

The President neither denied nor discredited the leakage, saying such reports will enhance financial transparency in Kenya and worldwide.

There's no reliable estimate of the family's net worth but its vast business interests span transport, insurance, hotels, farming, land ownership and the media industry in Kenya.

In 2011, Forbes magazine ranked Uhuru as Kenya’s richest person and the 26th wealthiest in Africa, estimating the family fortune at about Sh50 billion.

First Family has been linked to 11 firms - one of which was valued as holding assets of Sh3.31 billion.
News
1 month ago

Former anti-corruption czar John Githongo said while the report does not imply corruption, it has created a lot of anxiety among Kenyans.

“There is no evidence of corruption in this round of documents released. I think the anxiety about what citizens are learning is caused by the fact that people who enjoy public trust—their leaders—seem to find it necessary to hide so much wealth in secretive jurisdictions,” he told the Star.

The anti-graft crusader said, "M-Pesa transactions are more transparent than the foreign accounts of leaders."

According to the leaked records, Uhuru and six members of his family own at least 13 offshore firms, one of which was valued as holding assets of Sh3.31 billion.

According to ICIJ, the leaked records listed Uhuru and his mother, Mama Ngina Kenyatta, as beneficiaries of a secret foundation in Panama.

Other family members, including his brother and two sisters, own five offshore companies with assets worth billions of shillings.

Suba Churchill, the convener of the National Civil Society Congress, told the Star the President should consider repatriating the billions back to the country to mitigate the economic crisis.

“The President should consider lending the money to the government so Kenyan can stop paying huge interest rates for loans from the international market,” he said.

Churchill said investigations must also be done to establish whether the offshore wealth was legitimately accumulated and if the law followed.

“We may not at this point conclude that the wealth was illegally acquired but that should form the basis of the investigations,” Churchill said.

Details of the Kenyatta family’s offshore wealth were brought to light by the Pandora Papers, a collection of more than 11.9 million records from 14 law firms and other service providers.

Documents show that a foundation called Varies was set up in 2003 in Panama, naming Uhuru’s mother, Ngina, 88, as the first benefactor.

Uhuru is named as the second benefactor, who would inherit it after his mother’s death.

Uhuru and six members of his family secretly owned a network of offshore companies.
News
1 month ago

The prime property, which was until recently rented by British Labour MP Emma Ann Hardy, is estimated to be worth Sh130 million.

Hardy's spokesperson told the BBC that the MP had "absolutely no knowledge" of who owned the property.

"She is shocked at what this investigation has uncovered, and believes it shows why more transparency is urgently needed," she said in her statement.

According to Finance Uncovered, the Kenyatta family has used other offshore companies to buy two more properties in the UK.

The foundation was registered to the offices of Alcogal in Panama City and was nominally run by board members from the Panamanian law firm.

It was set up for the benefit of Muhoho, with his son Jomo Kamau Muhoho, as successor.

Muhoho owned three registered in the BVI, according to records.

Another BVI company that Muhoho owned had a Sh3 billion valuation in stocks and bonds as of November 2016, according to the Pandora papers.

"A search of public records in BVI and Panama found that most of the companies linked to the Kenyatta's are now dormant, some of them as a result of non-payment of regulatory fees," the BBC reported.

Panamanian foundations are prized, like trusts, because those who create them, the true owners of the assets, are not required to register their names with the Panamanian government. That secret remains with their lawyers.

This even as a section of the civil society asked the anti-graft agency to reveal if President disclosed details of his interests in his family’s massive offshore wealth.

The Public Officers Ethics Act compels all state officers to biennially declare their wealth to the Anti-Corruption Commission although the agency is not under obligation to publish the details for public scrutiny.

Anti-graft crusaders say the EACC should openly come out and clear the air about what the President owns as well as his interests in the larger Kenyatta family wealth.

“If the President did not file the necessary statutory requirement of the ethics law, then the EACC should be held responsible for dereliction of duty,” ICPC executive director Ndung’u Wainaina.

Wainana said the EACC has a legal mandate to ensure every public officer submits details of their wealth, including the President, as part of the requirement to promote good governance.

“The commission should investigate if there was any conflict of interest and if at all the President could have abused his office to illegally benefit his family,” Wainaina said.

It's not illegal to run secret companies, but some have been used as a front to divert money, avoid taxes and for money laundering.

The Pandora Papers, however, show no evidence the Kenyatta family stole or hid state assets in their offshore companies.

The Pandora Papers is a leak of almost 12 million documents and files exposing the secret wealth and dealings of world leaders, politicians and billionaires.

The data was obtained by the International Consortium of Investigative Journalists in Washington, DC, which has led one of the biggest ever global investigations.

Country has lost almost Sh7bn in taxes due to high secrecy involved during transfers.
Business
1 year ago

Panamanian foundations are much sought after because the true owners of the assets are only known by their lawyers and they do not have to register their names with the Panamanian government, the ICIJ reported.

The assets can also be designed to be transferred tax-free to a successor.

The Pandora Papers reveal that in 1999, Uhuru’s mother and her two daughters, Kristina and Anna, set up an offshore company—Milrun International Limited—which was incorporated in the British Virgin Islands (BVI).

According to the ICIJ, Uhuru’s mother and his sisters were advised by experienced international wealth experts from the Swiss bank Union Bancaire Privée.

Union Bancaire Privée advises some of the world’s wealthiest people on how to manage their money.

Its eight-story glass headquarters overlooks Lake Geneva and the nearby Prada, Versace and Mont Blanc storefronts.

The company then recruited Alcogal, a Panamanian law firm specialising in setting up and administering offshore companies.

The consortium says invoices from Alcogal to the bank show that the Swiss advisers referred to Uhuru’s family with the code "client 13173."

Alcogal provided a registered office for Milrun on the largest of the BVI islands, Tortola, and supplied staff members to act as the company's official directors.

This ensured that the registered company could not be traced back to the Kenyattas in any way.

According to the reports, Alcogal helped Mama Ngina and her daughters buy an apartment in central London’s upscale Westminster neighbourhood.

The Pandora papers said the Kenyatta family still owns the apartment, according to filings at the UK Land Registry seen by Finance Uncovered.

Kenya yesterday signed an agreement with Jersey for the repatriation of Sh516 million corruption proceeds stashed on the island.The cash will be ...
News
2 years ago

Suluhu assured Dangote and all investors that their businesses are well secured.
News
6 months ago

Nairobi and London have a deal to return cash stolen and stashed in British banks.
Business
6 months ago
by JAMES MBAKA AND BBC
News
05 October 2021 - 06:30