Another batch of syringes is expected on Sunday and Monday.

•Another batch of syringes is expected on Sunday and Monday.

•The consignment aboard Qatar airlines was received by officials from the ministry of Health. 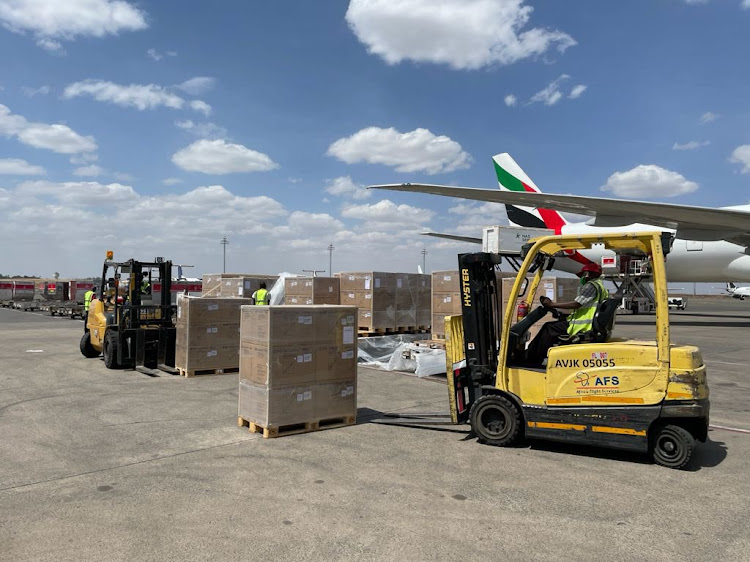 The first batch of pfizer syringes arrived in the country on Saturday aboard Qatar airlines at 1.30pm.
Image: MOH/TWITTER

Kenya on Saturday received its first batch of pfizer syringes.

The consignment aboard Qatar airlines was received by officials from the ministry of Health.

The syringes were later taken to the Kitengela vaccine stores.

The government is expecting a total of 2.2 million special syringes.

Health CS Mutahi Kagwe said another batch is expected on Sunday while the last one will arrive on Monday.

On Tuesday the US Embassy in Nairobi on announced the arrival of a donation of 210,600 doses of the Pfizer Covid-19 vaccine to Kenya.

According to the Embassy, the donation was part of the United States’ efforts to combat Covid-19 around the globe.

The vaccines arrived in Kenya on Tuesday morning at the Jomo Kenyatta International Airport and were met by U.S. Embassy Health Attaché, Dr Douglas Shaffer.

So far, the United States has donated close to 3 million Coronavirus vaccine doses to Kenya.

On September 17, Kenya received its first batch of Pfizer vaccines donated by the US.

The consignment of 795,600 doses arrived at JKIA onboard a DHL Cargo Aircraft, delivered by Gavi, the Vaccine Alliance.

Kenya receives 210,600 doses of Pfizer vaccine donated by US

So far, the US has donated close to 3 million Coronavirus vaccine doses to Kenya.
News
9 months ago
by SHARON MAOMBO Business Writer
News
02 October 2021 - 17:43