•MPs ask why KRA uses percentages to calculate tax and not absolute figures. 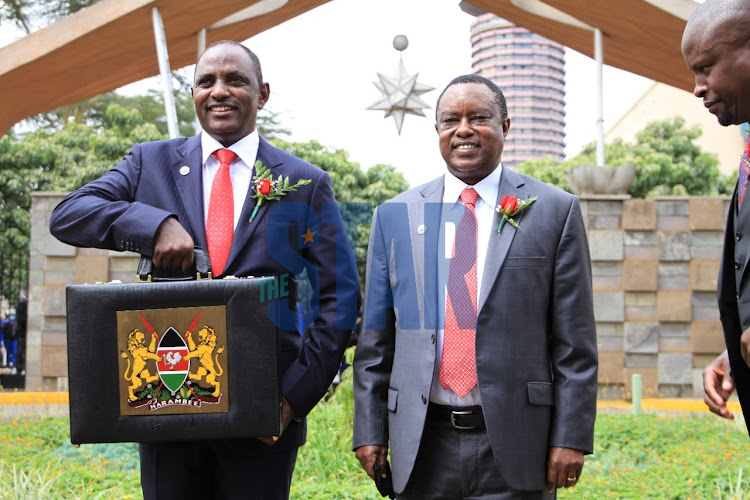 The National Treasury has rejected calls to revise fuel taxes saying the move would distort the country’s budgetary allocation to various state departments.

Principal Secretary Julius Muia told MPs on Wednesday that “any alteration or elimination of a rate of tax must take into account its knock-on effect on the national budget."

He said any amendments to the tax laws would lead to drawing a supplementary budget to adjust the revenues that the taxman stands to lose in the changes.

“An amendment bill leads to an appropriation bill. It will affect national government borrowing plan and will also occasion changes in Division of Revenue,” Muia said.

The PS said the reduced taxes would further impact the government expenditure, including flagship projects in the infrastructure and in the long run affect the implementation of Big Four agenda.

“We continue investing in infrastructure namely roads, power, and ports. The reduced taxes would impact the expenditure. We will provide our views on this when it gets there,” Muia said.

The PS appeared before the Finance Committee of the National Assembly chaired by Homa Bay Woman Representative Gladys Wanga following a petition by Matungulu MP Stephen Mule and two other members of the public.

On the recent price increase, the PS said it arose from external factors which the government has no control over, citing the increase in prices globally as the economy picks up post-Covid-19.

“We have not increased any taxes on fuel since January this year. We don’t charge import duty on fuel products,” Muia said.

He added that it was worth noting that the standard rate of VAT is 16 per cent but that of petroleum products is eight per cent, revenue that is used to fund the national budget.

Muia also disclosed that the government has collected nearly Sh30 billion from Petroleum Development Levy since 2018.

Even so, MPs demanded answers on where the money has gone to including the revenues from the railway development levy.

On this, Muia said the fund has a balance of Sh3.6 billion, with MPs insisting that only Sh2.8 billion went into stabilisation.

Wanga said it was regrettable that Sh18 billion went to infrastructure yet the fund is primarily meant to stabilise fuel prices.

This was even as KRA commissioner-general Githii Mburu, who accompanied the PS, revealed that the taxman collected Sh233 billion in taxes on fuel in the year ending June 2021.

"We only collect what we are told according to the law. We are meeting our targets because Kenyans are paying their taxes, not a shilling less or a shilling more," Mburu said, sentiments pointing fingers at MPs mandated with lawmaking.

On the petroleum development levy, Muia said the money has been spent on repayment of SGR loans as well as defraying costs of operations of the railway.

The PS said given that the country has no deep reserves, the measures to cushion the citizens would be limited to the monies available.

“This depends on the money that we have. We reduced taxes and had to claw back on the reliefs otherwise we wouldn’t have had the money to run the country,” the PS said.

But Wanga questioned the long period the concerned ministries were taking to come up with a solution to the fuel crisis.

“We are talking of consulting for a month when Kenyans are continuing to suffer expensive fuel. How fast can we expect these consultations to end?” she asked.

Muia said the consultations would be fast but was categorical that removal of the levies would make the problems worse as there are expenditures that have to be met.

“When you look at the structure of our expenditure, it is what informs how much revenue we collect. It is difficult to compare us with other economies. Our expenditure structure is different,” the PS said.

Lawmakers also asked why KRA uses percentages to calculate tax and not absolute figures, which Treasury said would result in a bigger deficit.

“Absolute numbers are stagnant. Our expenditures continue to grow hence the use of percentages. We risk getting into more debt if we charge absolute numbers,” Muia said.

In the petition, Mule is seeking a reduction of tax percentages with calls to reduce Value Added Tax on fuel products to eight per cent, VAT on petroleum to four per cent, zero rate LPG, reduce excise duty to two per cent, cut the railway levy to 1.5 per cent, and import declaration to one per cent.

Post a comment
WATCH: The latest videos from the Star
by MOSES ODHIAMBO Journalist and Political Writer
News
30 September 2021 - 05:15
Read The E-Paper