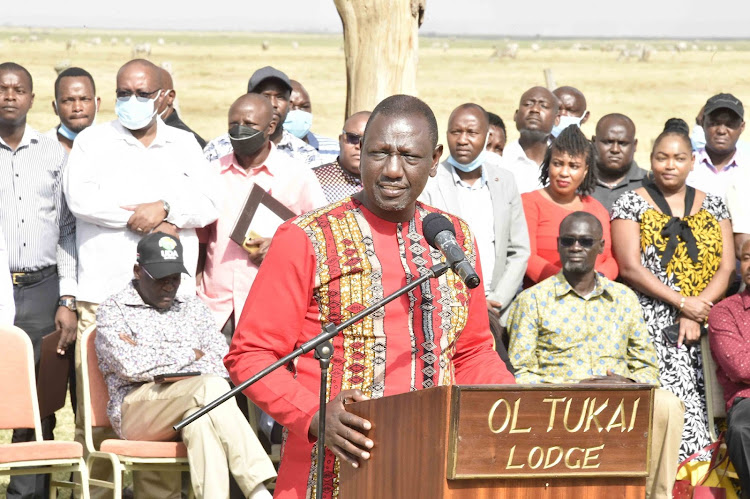 Deputy President William Ruto has changed tack, slowing down attacks on his boss Uhuru Kenyatta and dropping the hustler-versus-dynasties narrative.

The latest campaign strategy is to target Raila, his presumptive main adversary for President in 2022.

Denounced by rivals for 'divisive and inciteful' campaign slogans, the DP has overhauled his messaging.

Instead, Ruto is now firing up attacks directed at ODM boss Raila Odinga, accusing him of wrecking the government.

The DP has maintained the genesis of his differences with Uhuru was the President's handshake with Raila on March 9, 2018.

Their political pact gave rise to the Building Bridges Initiative that diverted and dominated government attention, Ruto said. It was declared unconstitutional and killed by the courts.

The Star has established that Ruto has also dropped some confidants from his Kalenjin tribe from his inner circle. He is giving allies outside of Rift Valley a free hand to drive his messaging.

The strategy aims to promote Ruto's image as a nationalist whose political camp is dominated by strategists and advisers from across the country.

Politicians and analysts say the DP's new strategy is aimed at enhancing his public appeal without appearing to antagonise his boss. 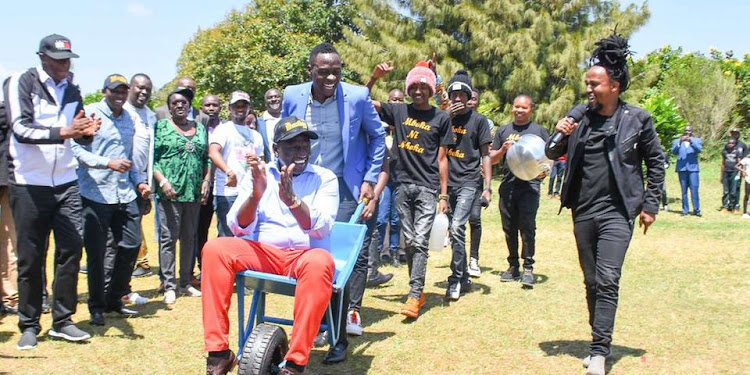 Kositany said Ruto is determined to build a formidable United Democratic Alliance that will accommodate Kenyans from all parts of the country. It will be a big tent.

"Ruto has a plan for all Kenyans and we want everyone to feel comfortable with William Ruto. [They] will also be part and parcel of the next government we will form," Kositany said of Ruto's broad strategy.

Ruto has been insisting UDA party will not cobble together coalitions with fringe parties but he has now decided to accommodate affiliates in 'hostile' regions.

Ruto had been anchoring his campaigns in the hustler-versus-dynasties narrative, saying it's time for the children of hustlers to take over Kenya's leadership.

Lately, however, instead of focusing on the poor versus the rich and entitled, Ruto is promoting a bottom-up economic model. He says it will revolutionise the economy by injecting capital into the lower strata.

The DP has come under sharp criticism for dishing out wheelbarrows and handouts to poor Kenyans while he lives in opulence. Now he says his rivals oppose him because he is not supporting them.

"When I supported Tinga (Raila) until he became Prime Minister, that time I was not corrupt," Ruto told a  recent meeting in Mt Kenya.

"When I pushed my brother Uhuru Kenyatta twice to become president, I was a good man, but not when I said I want to empower ordinary citizens. They all started calling me names."

The Deputy President now says the wheelbarrow is just a symbol of his economic revolution's ability to turn around the fortunes of all Kenyans. Not just the poor masses.

“You can as well tell us the complexity of the orange [Orange Democratic Movement symbol], instead of being obsessed with the simplicity of the wheelbarrow," Ruto fired at his rivals.

The DP has the simple wheelbarrow in the bottom-up economic plan that seeks to give jobs to the jobless, promote enterprise for the business community and modernise farming.

In the last couple of months, Ruto has tactically distanced his Kalenjin community in his presidential campaigns as he shakes off the tribe label.

The change of tack has been attributed to a team of top communications strategists.

In a move to build a national outlook, the DP has assigned the Kalenjins to play centre-defence while his troops from other counties occupy attack positions.

Other technocrats in his think tank include well-known economists, political experts and veteran political leaders from around the country.

Ndii was prominent in Raila's 2017 campaign.

Most heavyweights have snubbed and isolated the DP.
News
1 year ago

Kalenjins no longer feature prominently in Ruto's activities. They include nationwide campaign tours, his campaign secretariat and meetings at his official Karen residence and his rural home in Uasin Gishu.

Even in the UDA, top positions are occupied by non-Kalenjins. The outfit successfully rebranded from the Party of Development and Reform (PDR).

Former Machakos Senator Johnson Mutham is the chairman, from Ukambani, Veronica Maina is the secretary-general from Central region and Odanga Pessa from Western region is the executive director.

Analysts said Ruto's change of tack is part of a wider political strategy to change the narrative from the usual tribal groupings to issue-based politics.

Nairobi-based strategist Peter Mugwe said the DP has “made strides to cut the image of a nationalist keen to end the politics of tribe”.

“If you have followed the DP's pronouncements and messaging in the last two or three weeks, you will discover he has put a lot of effort in fighting the return of regional parties," he said.

"Ruto has succeeded in building a national image and that is why he is popular across the country,” the analyst told the Star in a phone interview.

He said the 2022 discussion has changed to issues. Raila Odinga, Musalia Mudavadi and Kalonzo Musyoka are now "selling the economic plan courtesy of the DP.

Is the 'Hustler's' march to State House unstoppable?

Ruto has fired up his 2022 campaign on the popular hustler narrative.
Siasa
1 year ago

In 2013 and 2017, campaigns were informed by tribal blocs, hence, Cord/Nasa and Jubilee could not campaign in some counties, he said.

The DP has been holding delegates meetings at his Karen residence but fewer delegations than before have come from the Kalenjin nation.

The Star reported that at least one out of every three meetings Ruto holds in Karen are with representatives from the Mt Kenya region.

Ruto has been accused of nominating mostly Kalenjins to top government positions between 2013 and 2017. The DP has not commented on these concerns.

Mathira MP Rigathi Gachagua said the second in command has embraced all Kenyans from diverse backgrounds.

“The DP has an open door policy. He is always willing to listen to diverse opinions and ideas on how to change Kenya. The regional economic blueprints initiative has been successful because of his desire and commitment to development,” he said.

They said while they are deeply part of the Ruto campaigns, they have allowed the DP to campaign in other parts of the country as they concentrate on their counties.

Koech said the DP has not neglected Rift Valley as “some people would want to portray”, saying the DP is kept abreast of development in the region.

“It is only fair that when the DP meets people from other counties, we give him space and respect. We do not want to domesticate him though he also represents our aspirations," Koech said.

Cherargei called Ruto "a national leader and not a tribal chief. We have given him our blessing to reach out to other regions.

“We are holding down the fort for him as we champion and teach our people about the bottom-up economic model. Our country is not homogeneous and thus we want as many Kenyans as possible to feel free to engage the DP,” he said.

Stop hustler nation narrative before it's too late

Hustler vs dynasties is only a charade to hoodwink the ignorant into voting en masse.
Siasa
1 year ago
by GIDEON KETER Political Reporter
News
29 September 2021 - 05:30