He said in Migori on Saturday that he would work with all fringe parties from Nyanza ahead of the elections. 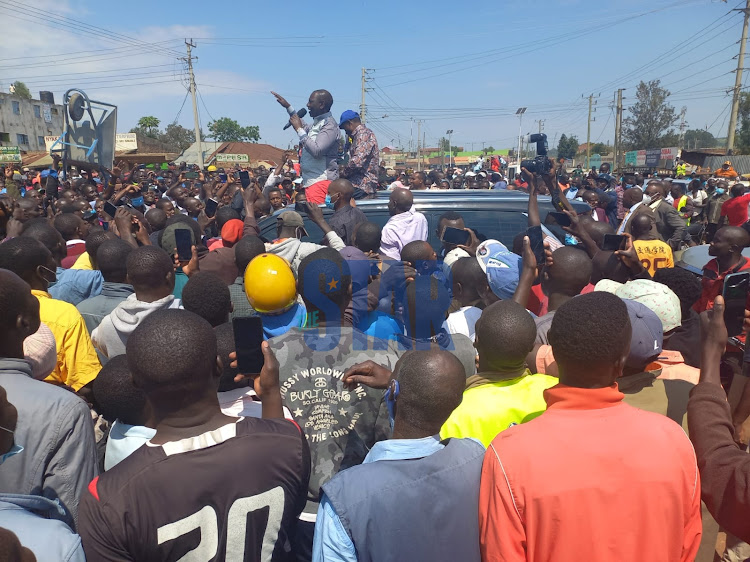 Deputy President William Ruto has softened his stance on working with small parties, especially from regions controlled by his perceived 2022 opponents.

The move has exposed his doublespeak on fringe parties after he recently dismissed forging alliances with such outfits within his strongholds.

The Star has established that the need to break into rivals' territories could have forced the DP to back down and embrace small parties in hostile grounds.

On Saturday, Ruto said in Migori that he would work with all small parties from the region ahead of the elections.

He said he would partner with Migori Governor Okoth Obado’s People’s Democratic Party in a strategy to turn tables on Raila Odinga’s in his backyard.

“All those who have been isolated are welcome on board. We cannot form the government if we keep isolating these small parties. I am ready to work with them,” he said.

Migori, and the entire Nyanza region, has been Raila’s political bedrock for decades. The region has voted him to a man and woman for years.

Obado has ditched Raila’s ODM for PDP and has pledged to strike a coalition agreement with UDA and support the DP’s candidature.

“My PDP party will be working with Deputy President William Ruto to form the next government,” Obado said when he hosted the DP in Awendo at the weekend.

The DP, who had initially maintained that all allies must join his United Democratic Alliance party, appears to be changing tack to penetrate hostile regions.

The DP’s change of mind can also been seen as a plot to avert a fallout within his allies who have declined to join his party, especially from Mt Kenya region.

Ruto formed UDA – seen as a splinter group – after he alleged frustrations and humiliations in the ruling Jubilee Party.

The push had threatened his popularity in the vote-rich region following a backlash from the lot that has rejected his call to dissolve their parties and join UDA.

“I have decided I will not vie for any political seat in the 2022 General Election,” Kuria said, insisting that, “I am now focusing on building Chama Cha Kazi for the interest of Mt Kenya”.

Political observers say the reluctance by allies and perceived coercion to fold up their parties could cost the DP – a dangerous trajectory that he would be keen to avert.

Political analyst Martin Andati said Ruto is now seeing the "political realities on the ground" – coalitions to mount a serious challenge for the country’s top seat.

“He is trying to change tack. He has realised that without coalitions he may not go anywhere. So, what he needs is to open it up for everyone. He should not block a section and then allow other regions to form small parties. That’s doublespeak and may not work for him,” Andati said.