Ruto says many Kenyans have been impoverished by hospital bills.

• The DP said the ambitious law will benefit millions of people who have not been able to access medical care due to lack of finances.

•The second in command noted that if passed, medical bills will not be a burden to Kenyans anymore. 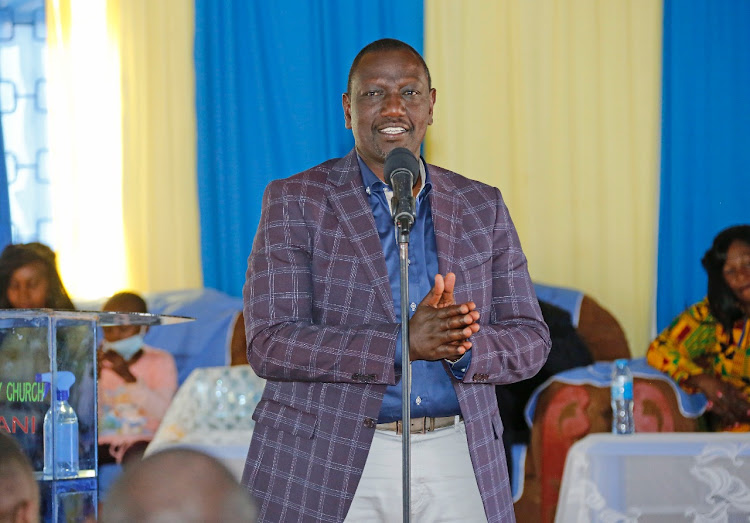 Deputy President William Ruto has called on Members of Parliament to pass the National Health Insurance Fund bill, to help Kenyans have access to medical cover.

Speaking on Tuesday, when he met small scale traders from Embakasi West, Westlands, Kamukunji and Makadara at his official residence in Karen, the DP said the ambitious law will benefit millions of people who have not been able to access medical care due to lack of finances.

"Many Kenyans have been impoverished by hospital bills. Today, we have a reason to have a brighter future,” Ruto said.

“All MPs should step forward and pass the Bill which is already four years behind schedule.”

The second in command noted that if passed, medical bills will not be a burden to Kenyans anymore.

The NHIF Bill, 2021, seeks to provide that the national and county governments be liable contributors for all public and state officers under a National Health Scheme.

Private employers would also be required to top up their workers' contributions to ensure the total amount is not less than Sh500 in efforts to raise more cash.

The proposed law currently before the Senate also seeks to stage mandatory registration for persons who have attained 18 years.

Ruto’s remarks come a few days after a new report by Auditor General Nancy Gathungu showed the national health insurer is broke, with a funding gap of over Sh3.6 billion.

“The fund’s performance is on a downward trend and if strategies are not in place to reverse the trend, the fund is likely to experience financial difficulties in future,” Gathungu warned.

NHIF’s performance has been a cause of concern for many leaders, with calls to the government and the fund management to get a lasting solution.

This has also been said to have slowed down Uhuru’s Universal Health Coverage plan, which is among the pillars of his Big Four agenda.

During the meeting with traders, the DP drummed up support for his Hustler nation saying that it will create an enabling environment for small traders across the country.

He noted that majority of Kenyans make a living through micro enterprises and should be given priority, just like other big businesses.

Ruto added that the Bottom-Up Economic Model will ensure businesses operate in a conducive environment for them to sprout and grow.

He also challenged his competitors to come up with a plan that will challenge the bottom-up approach instead of criticising it.

"We must stop politics of hatred and tribalism. Let us compete on the platform of issues and development agenda,” he said.

NHIF is broke, may not meet obligations — auditor general

NHIF reported a deficit of Sh3.6 billion during the year under review.
News
8 months ago