I had no motive to kill Willie Kimani — policewoman 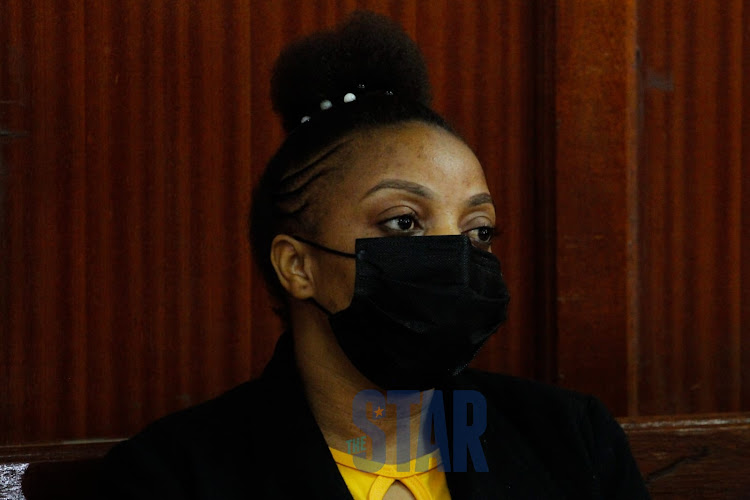 Administration Police Sylvia Wanjiku an accused person in the murder of lawyer Willy Kimani and his client before Justice Jessie Lessit on September 27,2021
Image: ENOS TECHE

Sylvia Wanjohi, one of the junior officers implicated in the murder of human rights lawyer Willie Kimani yesterday told the trial court she had no motive to kill him.

Sylvia was last week placed on her defence after trial judge Jessie Lessit found she and the other accused—Fredrick Leliman, Stephen Cheburet, Leonard Mwangi and Peter Ngugi—have a case to answer over the murder of Kimani and two others.

The three were reportedly killed at 7pm in a thicket in Mlolongo.  Their bodies were then dumped in a river at Ol Donyo Sabuk and recovered one week after their disappearance.

Sylvia who gave an unsworn statement began by making corrections to the initial statement she made during investigations into the case.

She told the court that on the date Kimani is said to have been abducted, she was on duty.

She got to work at 6am and at around 10am, she called accused number two Cheburet and requested him to take her to ramtons company to purchase a gas cooker.

“We met. I requested corporal Muita to hold my brief. He was prosecution witness 18 in this case. I also gave him the keys to the cells and the armoury,” she said.

Sylvia said she met Cheburet at 11.30am. He then showed her the place but she did not buy the gas cooker. “It was expensive. So we came back to the camp at half past noon. I took a lunch break and resumed work at around 1:15pm,” she said.

Accused in Willie Kimani takes stand to defend himself

The court heard that Sylvia worked until 6pm then booked off duty.

She said she then left for Mlolongo at 6.30pm to go and check on her boutique business which was not far from Family Bank.

She was given a lift by one Christopher Muthui, a resident of Mlolongo who also gave his testimony on her behalf. He was one of her witnesses.

She said they arrived at Mlolongo at around 7:10pm and stayed at her business until 8pm. She then left for pipeline estate and went back to the Syokimau post at 10pm.

But one of her witnesses Faith Mutiso, who was called to the dock, told the court that she saw Sylvia at the camp at around 7:30pm on that day of June 23, 2016.  This was contradictory to Sylvia’s testament.

Mutiso, one of the corporals at the post said she had been woken from her sleep by screams from within. The screams were as a result of a burning house near the camp.

“I saw Sylvia after visiting the scene. The scene of the fire was 100 metres away. I met Sylvia at her house,” Mutiso said.

Sylvia in her evidence to the court yesterday also said she did not receive any reports from members of the public nor did she receive any prisoner on that day.

She referred to the testimony of prosecution witness number 29 Kiplagat Serem to corroborate her claims. She said Serem in his evidence said he dusted the cells for fingerprints and DNA and did not confirm there were people in the cells.

Sylvia also said Mutiso did not see anyone in the cells.

“I did not arrest any suspect on June 23. On that day, I only had one key for the cells. There are usually three. I do not know who had the rest of the spare keys,” she said.

Sylvia further faulted the investigating officer in the case for failing to probe and establish the type of padlock used to lock the cells and the number of keys used and who had the spare keys.

On June 30 2016, the three were found dead in gunny bags in Oldonyo Sabuk River.
News
10 months ago

Five accused of Willie Kimani murder have a case to answer

Court says the prosecution has proved a prima facie case against them
News
10 months ago
by SUSAN MUHINDI Court Reporter
News
28 September 2021 - 16:51