• Trouble started on Wednesday after the shooting of an illegal fisherman, riots broke out, a bus was burnt, roads blocked and stores looted.

• After deployment of riot police and a looting spree on Thursday night, the situation was returning to normal on Friday. 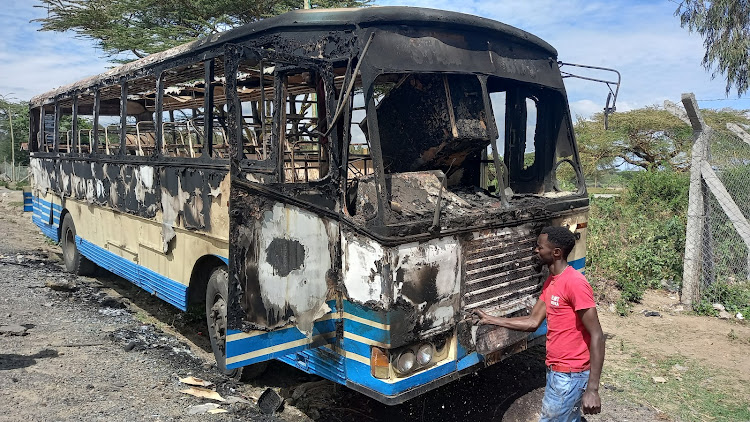 Naivasha youths demonstrating against the fatal shooting of an illegal fisherman, looted businesses and were joined by criminal gangs.

Demonstrations began on Wednesday and peaked Thursday night when businesses were smashed and goods carted away in Karaigita estate.

Riot police have been deployed and the situation was returning to normal on Friday.

More than 30 suspects have been arrested in connection with looting and vandalism.

Shops, hotels, bars, homes and motorists were not spared after attempts to barricade the Moi South Lake road were thwarted by riot police.

Youths destroyed the home gate of an MCA and destroyed his personal belongings.

Trouble started after a 24-year-old foot-fisherman was shot dead in Karagita landing beach in a confrontation with Coast Guard officers.

He said some owners were assaulted and flower farm workers were sexually assaulted by the criminal gangs.

“We fully supported their demonstration against the killing of the fisherman but they have turned against us by looting our shops and homes,” one trader said.

He blamed looting on a group of criminals using the cover of darkness.

“We have dispatched more police officers to the estate and we shall deal ruthlessly with these criminals who have taken the law into their own hands," Kisulu said.

On the killing, he said officers involved had recorded statements.

“An inquest file has been opened and the ballistic experts have collected the guns used during the incident for analysis,” he said.

MCA Virginia Wamaitha condemned the looting accusing some politicians whom she didn’t name of inciting the violence.

“The demonstrators have turned into criminals antagonising residents and it's time security officers dealt with them as per the law,” the Hells Gate legislator said.

The ‘Network Gang’ has enlisted youths involved in illegal fishing.
R.Valley - Page 30
1 year ago
Post a comment
WATCH: The latest videos from the Star
by GEORGE MURAGE CORRESPONDENT
News
24 September 2021 - 13:27
Read The E-Paper