The resolution to silence the guns was made in 2013 by African member states in Addis Ababa, Ethiopia.

• The festival seeks to use art to create awareness about the Africa Union’s initiative to achieve a conflict-free Africa, prevent genocide and rid the continent of wars.

• The festival, the second edition, started on December 1, 2020 and drew more than 1,000 participants from across the globe. 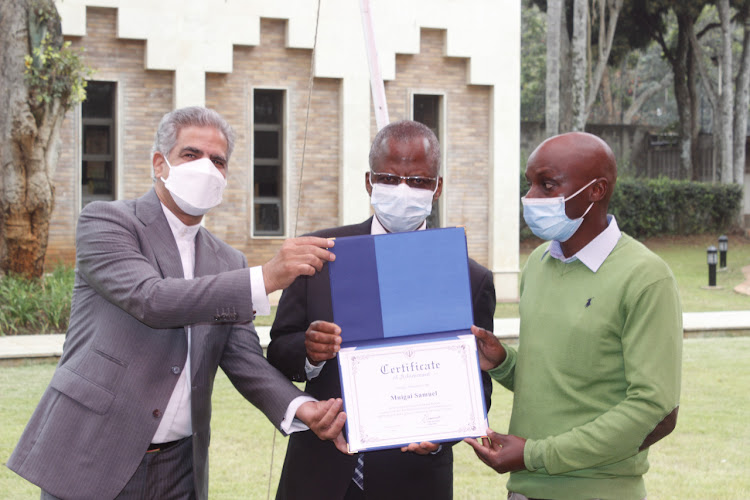 The Embassy of Iran on Tuesday marked International Day of Peace by awarding artists who participated and won in the World Cartoon Festival on Silencing the Guns in Africa.

The festival seeks to use art to create awareness about the Africa Union’s initiative to achieve a conflict-free Africa, prevent genocide, make peace a reality for all and rid the continent of wars.

The festival's second edition started on December 1, 2020 and drew more than 1,000 participants from across the globe.

Paul Kelemba aka Maddo, who represented five other jurors, said the festival considered 687 entries, which they categorised into Kenyan and international categories.

The third position in the regional category was taken by Andala Boniface Okumu (prize money $200) , second position by Edwin Eric Njue ($300) while the winner was Samuel Muigai aka Igah ($400).

The winners globally were Michael Gomez from Cuba (third position) receiving $2,000, Ares also from Cuba (second position) who got $3,000, while the winner was Carlo Gomez from Brazil, taking home $4,000

The artwork was showcased at an exhibition after the award ceremony and will be available for viewing at the Iran House of Innovation and Technology in Nairobi.

“This festival will certainly contribute immensely towards creating awareness and reducing incidents of illegal firearms on the continent of Africa,” Maddo said.

Iran Ambassador to Kenya Jafar Barmaki said through the festival, the embassy  seeks to accelerate calls to action by assimilating 2020 and 2021 themes in culture and heritage while fast-tracking and silencing the guns in Africa.

Ambassador Barmaki noted that while guns are supposed to protect, they can turn lethal as has been the case in various parts of the world and recently in Kenya.

“At least 1,000 people die each day from gunshot wounds and three times as many are left with severe injuries. If the deaths, injuries and disabilities resulting from small arms were categorised as a disease, it would qualify as an epidemic”.

“Yet the media and popular opinion tend to suggest gun violence is simply an avoidable consequence of human cruelty or deprivation rather than a public health that can be prevented or at least reduced,” Barmaki said at the embassy.

He said that in marking the International Day of Peace, they unanimously discourage sons and daughters of Africa from taking up arms with the aim of achieving a peaceful and conflict free Africa.,

“The Islamic Republic of Iran remains steadfast in its pursuit of enabling and promoting of an African continent with strong cultural identity, common heritage, shared values and ethics that enable her rise above her adversities and achieve peace and development, which is in line with Agenda 23,” the envoy said.

The resolution to silence the guns was made in 2013 by African member states in Addis Ababa, Ethiopia.

Through the then AU chairperson Nkosazana Dlamini-Zuma, who visited various states and collected views from governments, civil society and the diaspora, member states agreed conflict remained on of the biggest challenges facing Africa and the number one impediment to the implementation of Agenda 2063 - Africa’s blueprint and master plan for transforming Africa into the global powerhouse of the future.

So, in the last 20 years, there have been efforts to silence the guns in Africa in an attempt to achieve a conflict-free Africa.

In 2017, for instance, the Assembly of the Union adopted a strategic document known as the “AU Master Roadmap of Practical Steps to Silencing the Guns in Africa by 2020, which has been extended to 2030.

And since the adoption of the master roadmap, the AU Peace and Security Council has led efforts in the implementation of the AUMR in collaborative efforts with African states, regional economic communities, AU Commission, the UN, African institutions/ organisations, CSOs and partners.

Despite these efforts, there are active conflicts in Tigray, Ethiopia; South Sudan, eastern DRC, Central Africa Republic, and a number of countries in Western Africa.

Troubled Horn of Africa through the eyes of peace envoy Kalonzo

The lead mediator in the region discusses conflicts in the Horn of Africa and his peace efforts.
Siasa
10 months ago

Extremism, the threat of terrorism and transnational crimes on the continent remain an ongoing challenge in Mozambique, Somalia, Nigeria and other states that have fallen victim.

There has been progress in the last two decades, as guns have been silenced in previous hotspots such as Angola, Côte d’Ivoire, Liberia, Lake Chad Basin, parts of Nigeria, Niger and Cameroon and Sierra Leone.

Significant strides have been made in difficult cases such as Somalia and Sudan, according to the Addis Ababa-based Institute for Security Studies, and peace-building initiatives on the continent have also helped quell many potential flare-ups.

Regional Centre for Small Arms representative Brig Gen (Rtd) Simon Christo said ending proliferation and smuggling of small arms, which are the core of conflicts in Africa, is a huge task that calls for concerted efforts in and outside the region.

“Security, peace and sustainable development should be achieved through multilateral cooperation and comprehensive and integrated approaches rather that resulting in unilateral and piecemeal efforts.”

“This event Iran’s contribution to the region’s security and development and a clear testimony of determination and commitment of the Islamic Republic of Iran to help the African Union  achieve conflict free Africa and take this agenda to the next level,” Christo said.

Ministry of Foreign Affairs Middle East director Ambassador Artur Ndambi the cartoon festival is good approach to silence guns and all weapons that can be used wrongly to harm mankind.

What options for Abiy, Tigray?

Suddenly Ethiopia starts to look a lot like former Yugoslavia just before the civil wars of the 1990s split it into six different countries
Opinion
11 months ago
by ELIUD KIBII Subeditor and writer
News
22 September 2021 - 01:00