• President Kenyatta has in previous addresses to UNGA called for strengthened global governance that is cognizant to the global fragilities.

•  This year’s theme is “Building resilience through hope - to recover from Covid-19, rebuild sustainability, respond to the needs of the planet, respect the rights of people, and revitalize the United Nations”. 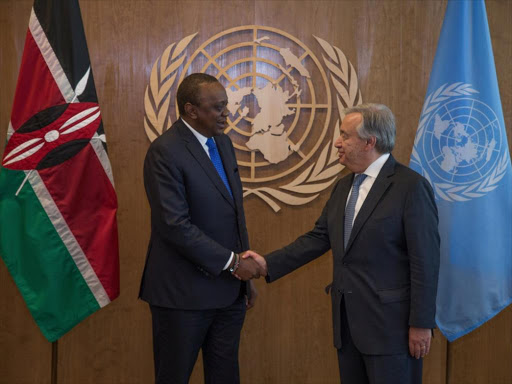 President Uhuru Kenyatta will not travel to New York for the 76th session of the United Nations General Assembly.

The President will, however, address the General Debate virtually on Wednesday and will focus on energy, food systems, climate change, global governance and oceans agenda, progress made towards SDGs and regional peace and security.

At the forum, world leaders present their national statements, speaking to the global community about their shared objectives and challenges and signal where they want to see global agendas moving.

“President Uhuru Kenyatta will address the United Nations Global Compact High-Level Private Sector Forum, SDG Moment of the Decade of Action, High Level meeting in Commemoration of the 20th Anniversary of the Adoption of the Durban Declaration and Plan of Action, UN Food Systems Summit and High-Level Dialogue on Energy during the period,” the Foreign Affairs ministry said in a statement on Wednesday.

Uhuru has in previous addresses to UNGA called for strengthened global governance that is cognizant to the global fragilities.

UNGA 76 started on Tuesday and this year’s theme is “Building resilience through hope - to recover from Covid-19, rebuild sustainability, respond to the needs of the planet, respect the rights of people, and revitalize the United Nations”.

Speaking to the Diplomatic Corps in Nairobi on September 17, CS Omamo said Kenya’s participation in the 76th Session of UNGA would showcase Kenya’s progress towards achieving a sustainable development as in line with the 2030 Agenda.

Kenya will be presiding over the affairs of the UN Security Council as the President for the month of October.

During the period, CS Omamo said, “Kenya will continue to advance good neighbourliness and Pan Africanist ideals on the basis of our four broad priority objectives: regional peace and security, peace support operations, counter terrorism and violent extremism; and climate and security”.

Due to Covid-19 the size of the delegations allowed into the General Assembly is limited with UN member states encouraged to provide pre-recorded statements in lieu of traveling to UN Headquarters.

In 2020 all member states were required to send pre-recorded statements with only representatives of member states allowed at the Headquarters.

“We must build back better and smarter as it is no longer ‘business as usual’"- Uhuru
News
1 year ago
by ELIUD KIBII Subeditor and writer
News
22 September 2021 - 16:16