Karua team says equity in representation, sharing of resources are part of the priority areas they want commitment to

• Kiraitu has announced they will vet presidential candidates based on their policies. 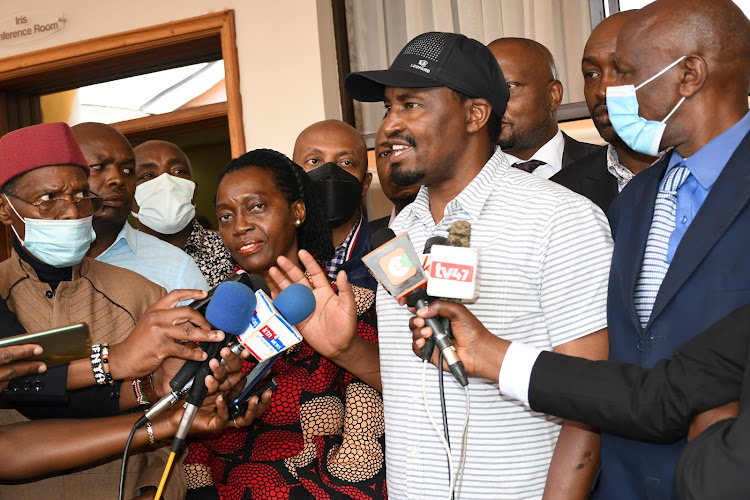 The Service Party leader Mwangi Kiunjuri flanked by leaders from Mt Kenya region address the press at Lake Naivasha Resort at the end of their one-day retreat. The leaders vowed that they would not disband their parties as they sought a presidential candidate to back come 2022.

Mount Kenya political bigwigs are playing hardball with presidential aspirants eyeing the region's giant vote basket that may force leading contenders back to the drawing board.

For the first time yesterday, a section of the region's leadership named four priority areas on which they would want the commitment of presidential candidates. They include contentious revenue sharing and representation.

Interestingly, the two are some of the issues that had been captured in the Building Bridges Initiative that was scuttled in court.

“We want equity in representation as well as equity in sharing of resources and development,” Narc Kenya leader Martha Karua announced after closed-door deliberations in Naivasha.

The details emerged days after Meru Governor Kiraitu Murungi announced that his people would this time vet all presidential contenders based on their policies.

“It has been necessary to invite and listen to all presidential contestants in next year’s general election so that the people of Meru can listen and vet them directly this time. Going into the election this time around, we in Meru have decided to do things differently,” Kiraitu said

Addressing the press in Naivasha, Karua said they were working on a blueprint that they would share with presidential candidates in their bid to identify who is keen to work with them.

“We are working on a blueprint, which has identified areas that we feel should be addressed in Mt Kenya and shall soon be sharing it with various candidates,” she said.

Deputy President William Ruto and Raila are locked in a fierce battle for the region's projected six million votes.

Mt Kenya region had been allocated the lion's share of the additional constituencies proposed in the BBI constitutional change, with Kiambu county alone getting five.

In addition, the BBI had proposed increased allocation to counties from 15 per cent to 35 per cent, and entrenching the 'one-man, one-shilling' mantra that had been the rallying call of the region.

The group, which also includes The Service Party leader Mwangi Kiunjuri and his Chama Cha Kazi counterpart Moses Kuria, also vowed not to fold their parties.

Karua, who was named the forum's spokesperson, said they are committed to safeguarding political pluralism.

“One of our priorities is defending democracy and multipartism. Remembering that for a very long time we fought the one party dictatorship to bring back plural politics in Kenya,” she said.

Kiunjuri and Kuria have been at loggerheads with Ruto over a push to have them dissolve their parties.

Over the weekend, a tough-talking Ruto slammed the door on any possible coalition with smaller political parties ahead of the 2022 polls. He warned those opposing his presidential bid to prepare for a bruising battle.

Speaking during his tour of Western Kenya, the DP said he will not be coerced into what he termed "tribal parties".

In recent weeks, Kiunjuri and Kuria appear to be drifting apart from Ruto.

The two skipped his Mt Kenya meeting in Laikipia over two weeks ago. Kuria also gave Ruto’s tour of his Kiambu backyard this Sunday a wide berth.

Kiunjuri pledged they would not disappoint the people of Mt Kenya.

“When leaders from the mountain meet, great things happen and we shall not disappoint this time round as we head into the next elections,” he said.

But despite their tough talk, there have been reports of suspicion within the team that could have seen some leaders develop cold feet.

Former TSP organising secretary Karungo wa Thang’wa, who on Sunday joined Ruto’s UDA, told the Star that the Mount Kenya unity forum is destined to fail due to differences with some members.

He said he fell out with the group after they lost direction in uniting the region because some leaders are advancing their political agenda using the caucus.

“The Mount Kenya unity forum is good, but the recent act endorsed by Kiunjuri, Karua and Kuria of inviting Jubilee didn’t go well with some leaders,” he said.

“We have been meeting to craft the blueprint for the region that would be presented to a presidential candidate we would settle on. Jubilee has ruined the economy and the livelihoods of our people, so for us to sit down with the same guys will not work.”

PNU deputy secretary-general Kelvin Kariuki termed the meeting tribal. PNU considers itself a national party and not a Mt Kenya party, he stated

"Remember that PNU was the government between 2007-2013 and couldn't afford to attend such meetings," he said.