One killed as youths attempt to ‘rescue’ illegal sugar trader

• A police officer and a young man were injured during the melee.

• Police also impounded three vehicles and a motorbike whose number plates had been smeared with mud. 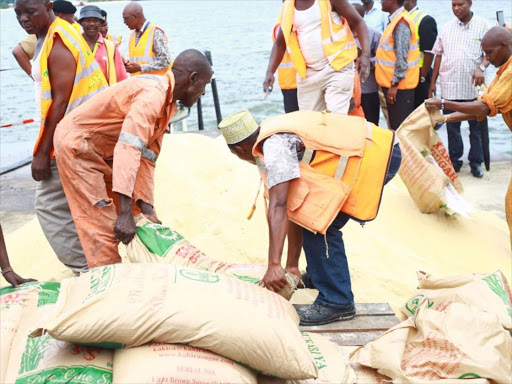 One person was shot dead by police on Sunday after a group of youths attempted to free a suspected contraband sugar dealer.

Lewis Wambetsa was rushed to Kakamega referral hospital, where he was pronounced dead on arrival.

A police officer and a young man were injured during the confrontation between seven DCI and CIPU officers attached to the Western regional KRA office in Kisumu and the youths at Makunga shopping centre in Kakamega.

The police officer sustained injuries in the right hand and left leg and complained of chest pains.

The injured youth, Evans Ariko, 22, suffered a gunshot wound to the lumbar (lower back). He was among 10 youths arrested by the police.

Police also impounded three vehicles and a motorbike whose number plates had been smeared with mud. They recovered metal bars from the vehicles.

The officers were escorting a lorry that was impounded by police in Chwele, Bungoma, while ferrying 400 bags of 50kgs of uncustomed sugar. The sugar is suspected to have been brought into the country from Uganda on Saturday.

But upon reaching Makunga market, the officers were blocked by about 20 vehicles and motorbikes, carrying the youths, who demanded that they release the lorry.

Western regional police commander Perris Kimani said the matter was being investigated by Kakamega DCI-KRA. The injured were in stable condition, she said.

“Our officers at Nalondo intercepted the lorry carrying contraband sugar and called in KRA because we knew the suspect must be avoiding paying taxes,” Kimani said.

“Verification was done by a multi-agency team and we agreed that the case be investigated by the DCI attached to KRA and the KRA investigations and enforcement unit so that they are prosecuted and pay taxes.”

Kimani said the KRA team was allocated security officers to escort the lorry to Kisumu.

The impounding of uncustomed sugar and subsequent confrontation comes amid complaints by farmers of excessive cheap sugar imports by unscrupulous traders.

Through the Kenya Association of Sugar and Allied Products (KASAP), farmers said that cheap sugar finds its way into the country through the porous Kenya-Uganda border.

The sugar cane pricing committee under the Agriculture and Food Authority reduced prices for a tonne of sugarcane from Sh4,040 to Sh3,833 three weeks ago, citing saturation of local markets with the commodity.