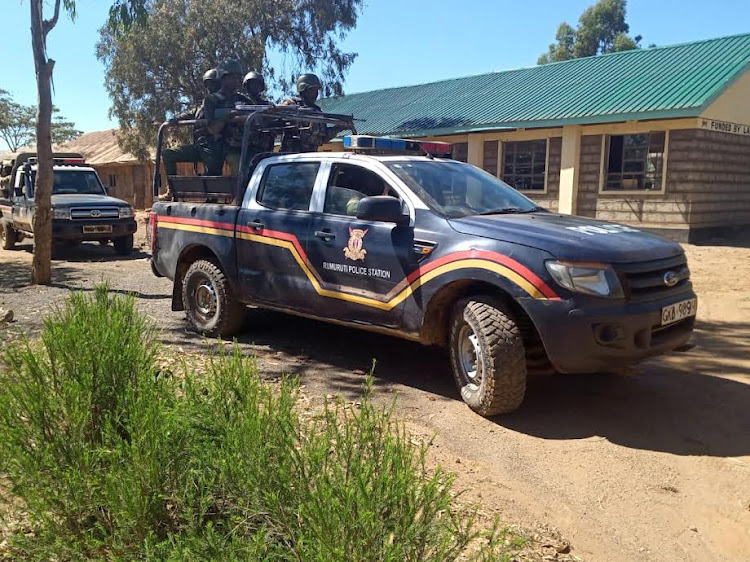 Armed police outside a school in Laikipia on September 13. Calm has returned to the area after a week of operation- NPS

About 15,000 heads of cattle are yet to be driven out of the Laikipia Nature Conservancy despite a government directive, the management said yesterday.

The Conservancy has been in the limelight following the illegal incursion by armed herders from areas outside Laikipia.

A statement by Allan Kamau of the Conservancy on Friday stated that on May this year, Kuki Gallmann, renowned author and conservationist, was shot through the leg when she encountered an armed gang of cattle raiders near Ol Moran.

She is still recovering from the injuries. She had also been shot previously in 2017.

“My mother is one of dozens of community members who have been wounded or killed in recent months in Laikipia West. Tragically my 78-year-old mother was shot through the leg in May 2021 by a gang of cattle raiders whilst she was driving alone near Ol Moran. I am still nursing her back to health.

Armed bandits from Baringo county are a constant threat to life and property in this area and usually engage mainly in livestock theft. They steal animals and drive them into the Rift Valley where they are seldom found. However, in pre-election years such as this, several hundred-armed men from far away invade the area and terrorise residents, including ourselves.  They are politically incited, and their aim is to drive away local inhabitants," Sveva Gallman, Kuki's daughter, wrote.

Kamau said LNC was purchased from a Kenyan company in 1972, with leases that still run for many decades. From 1983, the land was dedicated to conservation and community projects, and has since created one of Kenya’s most important water towers adding that today it is 100 percent owned by Kenyan citizens.

“LNC believes that for biodiversity to thrive, as it must for the ongoing health of the planet and its people, it requires a model that strengthens local community livelihoods via social enterprises which draw on the effective management of its natural resources. To that end, LNC has developed a range of enterprises in which community members have a sizeable stake,” Kamau said.

He added that LNC has been dedicated to building a world-class tourism asset for Kenya, in parallel with a commercial grazing project for the pastoralists of western Laikipia, and wide-ranging investments in stimulating farming and value addition in an area otherwise deemed as arid and semi-arid.

Through the preservation of its extensive forest cover, Kamau said, it is the primary water tower for the World Heritage Sites of Lake Baringo and Lake Bogoria, providing life-giving rain for smallholder farmers and pastoralist pasture in both Laikipia and Baringo counties.

Prior to the incursion of the area in March 2021, thousands of local pastoralists grazed cattle in the Conservancy under a structured grazing scheme.

He further said that LNC has a partnership with the National Drought Management Authority, designed to commercialise 1,500-4000 local livestock in an annual fattening and breed stock improvement cycle to generate income for the neighbouring pastoralists of over Sh 100m in a year. These local cattle are no longer able to access the grazing lands due to the ongoing insecurity.

“For several years we have provided structured grazing for community members without any problems. Up until March 2021, we were providing high quality grazing for 1500 community livestock and fattening them for market, and were due to scale up to 4000 over several months to the end of the year. We had to stop this fattening scheme due to an insurgence of armed men with over 15, 000 head of cattle coming from other counties," Sveva Gallmann said.

“We believe that cattle and wildlife can coexist, and we believe that community and conservancy must be mutually beneficial to each other- so we have decided not to have our own cattle in order to dedicate our well-managed grass bank to the neighbouring communities. However, in this pre- election year, the whole of Laikipia West has witnessed a planned insurgence of men from other counties with hundreds of weapons and this has debilitated the project. Many areas of the conservancy no longer have any grass left at all and local pastoralists' livelihoods are at stake."

Kamau, on the other hand, noted that the conservancy has also developed a variety of farming and value addition initiatives.

This includes a state-of-the-art nursery for Hass avocado seedlings which is distributing 40,000 seedlings to 500 local farmers.

The conservancy has multiple tourism and education facilities, which since their establishment, have catered to over 10,000 students, according to Kamau.

He argues that these projects will contribute to over Sh700 million to the regional economy annually and provide reliable employment to over 1000 people.

Kamau says the projects are also about engaging the broader community in the battle against climate change, land degradation, and the resultant regional instability.

“We are thankful to the government for its continued efforts to restore law and order in Laikipia West. LNC is committed to a continued collaboration with the national and county government to find a lasting solution to improved security, conservation and most importantly, the welfare of the community,” Kamau said.

He noted that the Conservancy is looking forward to the successful eviction of the remaining illegal herders and a resumption of LNC’s work with government to deliver water, grazing areas and livelihoods to its local communities.