• Students who previously paid about Sh2,700 per semester for accommodation will now part with almost Sh18,690. 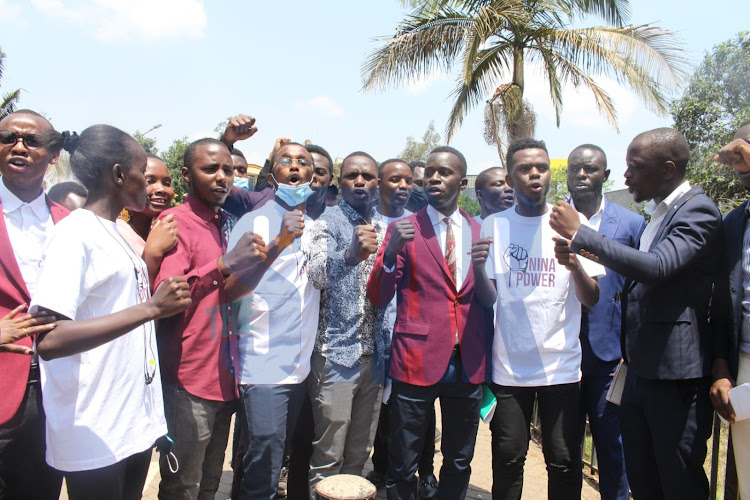 A section of University of Nairobi students react after addressing journalists on planned demonstrations over fee increment outside the institution, Nairobi on September 17, 2021.
Image: ANDREW KASUKU

The University of Nairobi Students' Association has announced planned demonstrations, following the collapse in negotiations over increased school fees.

Association secretary general Nathan Kikwai said in a memo that the demos will take place at all the university’s campuses on Monday.

“Deliberations of University of Nairobi administration on the increment of both school fees and accommodation fees have collapsed,” Kikwai said in an internal memo.

Following the planned demonstrations, the association has asked all first-year students and parents who are planning to report to the school on the mentioned date not to do so.

Students who are set to report to the institution for the September intake will have to pay hiked accommodation fees.

Students who previously paid about Sh2,700 per semester for accommodation will now part with almost Sh18,690.

The hostels were charged at Sh30, Sh28, and Sh26 per day for a whole semester.

The revised fee structure directs students to pay Sh175 daily for a single room and Sh144 for a room shared by two.

Earlier on, the student’s association had tried to convince the vice-chancellor, dean of students, and halls officer to do away with the increment, saying there was no formal communication on the same.

"I understand that the university is trying its best to have reforms on financial health. The main concern is that who authorized such hikes in accommodation and why isn't there any formal communication on the same stating the reasons as to why?" the notice reads.

Students joining UoN for postgraduate and self-sponsored degree courses this month were faced with increased fees despite recent public pressure on the institution to reverse the decision.

Fees for degree courses like law, Bachelor of commerce, and economics under the self-sponsored programme were raised to about Sh1 million.

Revised fees structure directs students to pay Sh175 daily for a single room and Sh144 for a room shared by two.
News
1 year ago
Post a comment
WATCH: The latest videos from the Star
by KEVIN CHERUIYOT Online Journalist
News
17 September 2021 - 16:24
Read The E-Paper