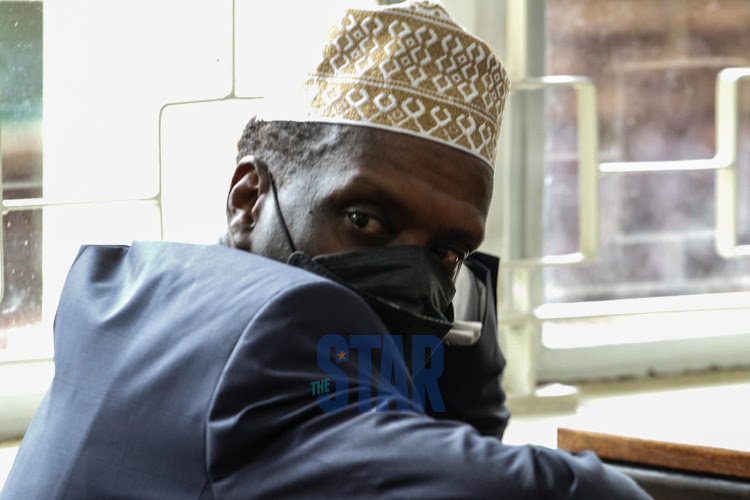 The decision by former Sports CS Hassan Wario to send three undeserving people to Rio for the 2016 Olympic Games could cost him 30 years behind bars.

Wario on Wednesday was found guilty of abusing his office. He did this by adding three people to the Team Kenya list to travel, yet they were not on the accreditation list.

He was part of the steering committee that deliberated on the Rio Project.

Wario is to be sentenced Thursday morning. The court will decide if the sentence will run concurrently or consecutively for each undeserving traveller.

Anti-corruption magistrate Elizabeth Juma said Wario took advantage of his office by sending Adan Enow, Richard Abura and Monica Sairo to the Rio games. Their improper trip to Brazil resulted in a loss of public funds.

The list of delegates, the court said, was presented to the steering committee without the three names. The three travelled to Brazil on a visa issued by the Brazilian Embassy.

Magistrate Juma found the additional names were included after accreditation was closed. She called this a clear indication they were not part of Team Kenya, yet their expenses were borne by the Kenyan government.

The Ministry settled on Green Bay Travel Limited to procure tickets on its behalf.

“Indeed, he (Wario) has powers to authorise travel but nothing stopped him from introducing these members to the steering committee which he was part of and also co-chaired at some point,” Juma said.

“There was a misuse of money during the Rio Olympic Games. Anyone who played a role in the planning of the Olympics was included in the travel. This is not the Spirit of the Olympic Charter. The budget for the games should be tailored on the needs,” she said

When Wario was placed on his defence after he was found to have a case to answer, he defended himself by saying his role in the Human Resource manual allows him to mandate an official to travel.

He said it was within his mandate to allow the people to travel out of the country. He testified the Rio 'fiasco' was all lies and bad publicity created by sports coach John Anzara.

But the court found he had no mandate to allow the trio to travel as Team Kenya. His move, the magistrate said, caused confusion in the issuance of tickets and alterations of tickets that may have related to the loss of public funds.

Abuse of office, according to Section 46 of the Anti-Corruption and Economic Crimes Act, is punishable by a fine not exceeding Sh1 million or imprisonment for not more than 10 years, or both.

In 2017, Wario was charged alongside his PS Richard Ekai, Haron Komen, Stephen Soi and Francis Kinyili.

They all faced various counts including abuse of office and willful failure to comply with procedures and guidelines on the management of public funds.

Parties in Rio case to highlight final submissions on May 27

They all faced the charge of engaging in a project without prior planning. They were all acquitted after the court said there was evidence planning was done by the steering committee and there were also concerted efforts to comply with anti-doping laws.

Former- Nock official Stephen Soi was also found guilty of three counts of abuse of office, and three counts of willful failure to comply with procedures and guidelines on public funds management.

He was the one who prepared a list for Team Kenya. The list was used for procurement of tickets, payment of allowances and payment of media facilitation.

The court found that Soi, being part of the steering committee, failed to disclose there was a double payment of Nock officials. He prepared and included officials of Nock and submitted their names for payments.

He also authorised the cancellation of air tickets resulting in a loss of Sh9.7 million public funds. He will also be sentenced on Thursday.

Some 184 people travelled to the Rio Olympics and the amount paid as allowances was about Sh150 million. The eight-person Kenyan Media Team were paid $10,000 per person for allowances.

During the trial, it emerged there were 135 changes made in the tickets, which attracted an extra cost. The cancellation was a higher indicator of the logistical challenges the group faced.

All the accused persons denied having committed the offences. Their defence was that there was an elaborate plan for Rio and there was prudent spending of public resources.

They said they did not surpass the budget and urged the court to acquit them.

For the fifth accused, Francis Kanyili, court said the prosecution ought to have produced evidence to show the Sh957,146 was paid into his account and used.

Kanyili was the secretary general of the National Olympic Committee of Kenya (Nock). He had been accused of irregularly acquiring public property worth Sh975,146 from the state department of Sports.

He was acquitted for lack of evidence.

As for Patrick Kimathi, the ministry's Finance officer, the court said the Sh22 million he received from the ministry was spent according to instructions he received.

He surrendered Sh10 million and ended up using Sh12 million. He had been charged with misusing Sh22 million public funds.

His evidence was that money was given to him as an officeholder. He said while at Rio, he got verbal instructions from former Sports PS Richard Ekai to make payments, which he did.

“Unless audit queries are raised on monies he surrendered, the court finds he used the money as per the instructions and surrendered the rest. If there was any question on imprest, it should have been raised on the Sh12 million," the magistrate said.

For Haron Komen, Juma observed, "It's plausible he did all that was required of him and he had no control on how Team Kenya was listed by Soi."

Komen had been accused of unlawfully authorising payment of unutilised air tickets worth Sh19 million.

The investigating officer who testified said he recovered the unused air tickets that were produced as exhibits. They cost Sh19 million.

His evidence was that the Nock president and the secretary general, having been paid by the International Olympics Committee should not have been paid by the government of Kenya. This amounted to double payment.