Kenya economy to get worse amid 2022 poll jitters — experts 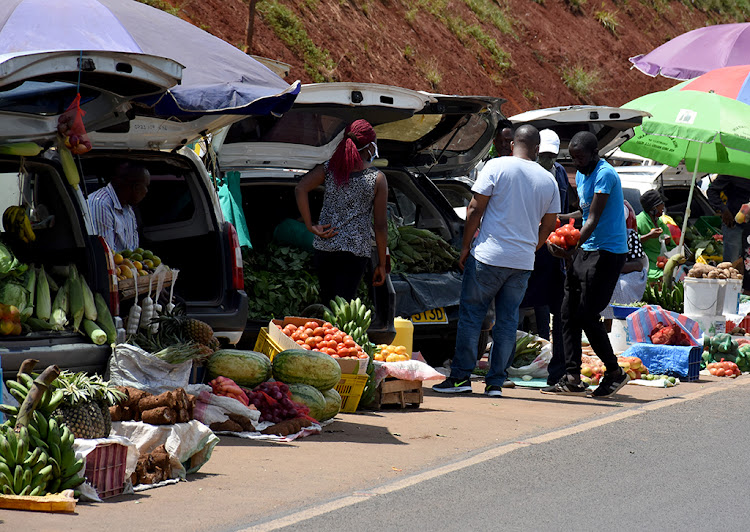 FOOD SAFETY: Vendors along the Northern Bypass sell fruits and vegetables to motorists from their car boots on 26 May 26.
Image: MERCY MUMO

Experts have trashed Treasury’s economic growth forecast sounding the alarm that Kenyans will be confronted by a tough economic environment as the country enters the 2022 electioneering period.

In a new report, the team has projected that the country’s economic growth for 2021 would be at four per cent and not the six per cent stated by Treasury boss Ukur Yatani recently.

In unveiling the Economic Survey, 2021 report, Yatani said the country’s economy would grow at 6.3 per cent, albeit depending on how well the elections will be managed.

“We are hopeful that the electioneering period will be well managed to avoid erosion of investor confidence as this could affect the road to accelerated economic growth,” the Treasury boss said.

The Phyllis Makau-led team says the government is faced with the challenge of sustaining such growth with the imminent election whose sides are slowly taking shape.

Deputy President William Ruto and ODM leader Raila Odinga are the frontrunners in the 2022 race.

PBO argues that historically, elections have been a dampening factor on growth, adding that the Covid-19 restrictions like social distancing in hotels are not making the situation any better.

“The 2021 growth is likely to be more of a ‘statistical’ than ‘real’ growth,” the team said in its report to MPs, holding that the projections cannot be used to base revenue targets.

The experts further warned that there may be an increase in investor flight following the heightened election uncertainty.

“It has been shown to limit investor confidence and this may further dampen economic activity. Keep an eye on investment activities particularly foreign direct investment,” the team told MPs.

They further stated that mass vaccination being spearheaded by the government at Sh14.3 billion, much as it is necessary, is not a sufficient factor for a full economic turnaround.

PBO says tourism recovery is still uncertain largely due to travel advisories issued against the country; add to the restricted access to some countries for Kenyans on account of vaccination status.

Of concern is that even domestically, some economic activities have not fully resumed due to the need to maintain Covid-19 containment restrictions.

“If this trend continues, then it will take long to rebound from the effects of Covid-19.”

Citing risks to the same expanding the budget deficit, PBO said, “This growth is therefore unlikely to be reflected in improved living standards for Kenyans or growth in household incomes.”

Kenya is just recovering from a recession after its economy contracted at 0.3 per cent due to the Covid-19 containment measures.

Yatani recently expressed optimism that the economy “is expected to record a significant rebound in 2021" citing the resumption of activities in the education sector and hotel industry.

The government also stated that key sectors like manufacturing and transportation are likely to rebound in the year, hence support growth.

But PBO holds that the service sector—accommodation and restaurant; wholesale and retail trade; transport and communication; financial and insurance services— is among the most affected in terms of income and job losses.

With the likelihood of continued under-performance, the economic experts argue that consumer spending is likely to remain subdued on account of eroded household incomes.

“Indeed, even where income has not been significantly eroded, the uncertainty in economic outlook may slow down consumption particularly of non-core items,” PBO said.

They further observed that the recovery of the global economy may not help the local situation since the 2021-22 budget has “not adequately addressed” reasons for low exports.

The experts cast doubts the agriculture sector would help as was the case in 2020 when the sector shored up an otherwise dull economic performance.

PBO said it is expected that agricultural performance will be inadequate due to below-average rainfall in the current year.

“The long rains were established to have been below-average and this has a negative impact on crop production as well as livestock. This will adversely affect household agricultural incomes.”

“In addition, production of staple crops such as maize continues to face the challenge of fall armyworm infestation in counties such as Trans Nzoia, Kiambu, Uasin Gishu, Kirinyaga, Baringo, West Pokot and Nandi.”

The team adds that food prices have been only stable because maize has been significantly supplemented by cross-border imports.

“On a positive outlook to food security, the below-average rainfall reduced desert locust breeding while increased food imports reduced prices of food such as maize.”

On manufacturing, PBO said the sector is yet to achieve its potential despite continued investments by President Uhuru Kenyatta’s administration.

The experts say the “main challenge facing the sector is mainly to do with slow progress with regard to implementation of the major ongoing projects.”

The team thus wants MPs to avoid unnecessary adjustments to the budget provisions through supplementary estimates.

They further hold that tracking the Economic Recovery Strategy in the 2021-22 budget may present a bit of a challenge.

“Though the post-Covid ERS document exists, it has not been clearly articulated in the budget. The performance indicators and targets are not clearly spelt out.”

Number of employed people fell to 17.4 million from 18.1 million at the end of 2020.
News
1 month ago
Chasing Africans’ anger on runaway public debt
by MOSES ODHIAMBO Political Writer
News
17 September 2021 - 06:15