Said the plight of Kenyans will be worsened by the increased fuel prices.

• DP William Ruto is also among other leaders who have criticised the government for increasing fuel prices.

• His sentiment comes as Kenyans continue to express their dissatisfaction over the high price of fuel, which will definitely lead to a high cost of living. 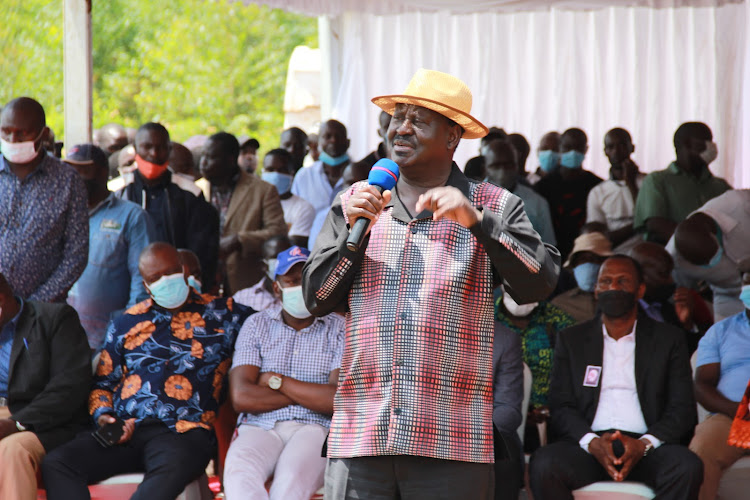 ODM leader Raila Odinga has broken his silence on the hike of fuel prices in the country following the latest review from the Energy and Petroleum Regulatory Authority.

Raila said on Thursday that Kenyans have been struggling to put food on the table since the onset of the pandemic now stand to have their collective plight worsened by the increased fuel prices.

“The prices should be lowered immediately to cushion the ordinary Wananchi,” Raila said.

His sentiment comes as Kenyans continue to express their dissatisfaction over the high price of fuel, which will definitely lead to a high cost of living.

Earlier on Thursday, DP William Ruto hit the government for the increase of fuel, calling on the Ministry of Energy to work with the relevant agencies and the Parliamentary Committees to address the steep rise in fuel prices.

The DP made his remarks on Thursday when he met grassroots leaders from Kandara Constituency at his Karen residence.

Ruto regretted that leaders were absconding their duties by engaging in politics that was adding no value to the people.

Industry players have warned that the cost of goods, transport, and electricity will rise, as they move to pass operational expenses to consumers.

This is in the wake of the sharp rise in fuel prices announced on Tuesday, which have hit a historic high.

The authority said in its review that the rise is as a result of increased taxes on all the three products notably VAT, which has gone up to 9.98 per cent on petrol from eight per cent.

This has pushed taxes on Super petrol, commonly used by motorists, to Sh58.81 a litre from a total Sh56.42 per litre in March this year.

Cotu secretary general Francis Atwoli said that President Uhuru Kenyatta should explain why the government is hellbent on increasing the pain and suffering of Kenyan workers with increase in fuel prices.

“We would like Uhuru to comment and make a statement on this unfair perpetual increase in fuel prices. Unless their policies place Kenyan workers at the centre then they should prepare for unrest from all quarters,” he said.

Ruto hits out at state over fuel price hike

DP tells public officers to get to work and offer the right advice to the government.
News
1 year ago

Transporters warned of a hike in fares, which has already been effected by some PSV operators.
News
1 year ago
Post a comment
WATCH: The latest videos from the Star
by KEVIN CHERUIYOT Online Journalist
News
16 September 2021 - 21:48
Read The E-Paper