Rider who spoke to Willie did not identify his body 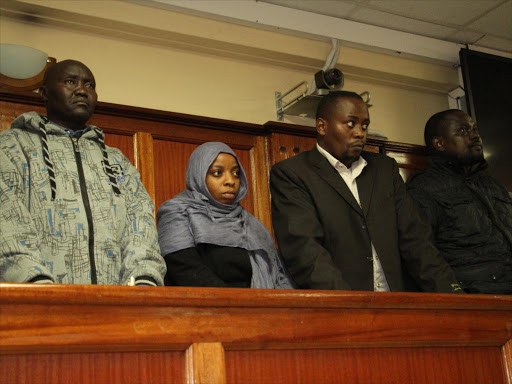 A boda boda rider who allegedly spoke with right’s lawyer Willie Kimani and took a distress note the lawyer wrote on a tissue paper, was not asked to identify his body.

Explaining why the key witness was not asked to do so, lead investigator chief inspector Clement Mwangi said “the bodies of the victims had decomposed by the time they were recovered from Ol Donyo Sabuk River.”

Mwangi, while being reexamined by state prosecutor Nicholas Mutuku Wednesday, told court that there was also no need to subject the protected witness to such identification because he only spoke to the lawyer and “did not see his face”.

Willie, according to the evidence that has since been adduced by the prosecution, threw the tissue-written note through a tiny window on June 23 while he was incarcerated at a temporary cell at Syokimau AP camp.

He threw the note a few hours before he, his client Josephat Mwenda and driver Joseph Muiruri were brutally killed.

He allegedly called on the boda boda rider who was riding past the container cell.

Through their lawyers, the accused had during cross-examination faulted investigators for failing to prove if indeed Willie was ever at the cell as claimed.

Defence had questioned why if at all, the boda boda rider had picked the tissue note, he never gave any description of Willie.

They had also told court that the chief’s camp and APs post are two different offices that are in different locations.

They had put it that there are AP officers attached to the chief and others to the AP offices and that the chief camp had a cell too.

“My lady, the note was thrown from a container which acted as a temporary cell. It was not thrown from the chief’s side”

The witness further explained that the chief’s office is adjacent to the APs post with a road in between. He said the chief camp does not have a cell, and therefore there was no way Willie could have been held there.

Explaining the involvement of Silvia in the killings, Mwangi said she was still at the station when the three victims were removed.

He said even though Silvia had already booked herself out of the centry and booking office at 6pm, 30 minutes before victims were removed, she was still holding on to the keys.

Mwangi said an officer who relieved Silvia that night confirmed that she handed over the keys to the cells between 7 and 7.30pm.

“My lady if the victims left the cell at the time as indicated in the confession which is about 6.30pm, Silvia was present and she had the keys to the cell,” Mwangi said.