Students were asked to vacate the premises on Wednesday, according to an internal memo. 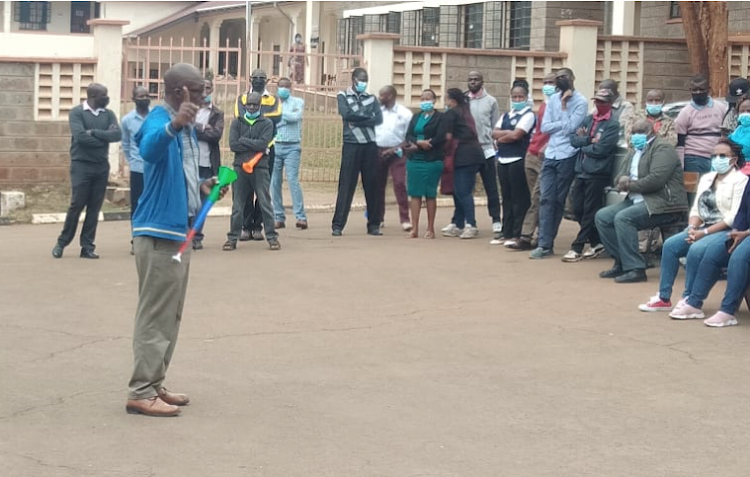 A lecturer addressing Multimedia University staff at the institution during a strike held on Wednesday September 15
Image: HANDOUT

Multimedia University has been shut down after lecturers and non-teaching staff downed their tools.

Students were asked to vacate the premises on Wednesday, according to an internal memo.

Lecturers and non-academic staff at the institution began a strike following failed implementation of the 2017-21 collective bargaining agreement.

The members of staff claim they have not been placed in the correct job groups and have been receiving old salaries for three months now.

They were set to receive a salary increment starting July after the government released Sh2.2 billion to honour the 2017-21 CBA.

Kenya Universities Staff Union branch secretary Gilbert Koech said they will not back down until the management settles their arrears.

“We are demanding correct placement for the last three months since the beginning of this financial year,” Koech told the Star in a phone interview.

According to the CBA, the government gives Sh 2.1 million but the required amount to pay all staff is almost Sh 3.1 million monthly.

"What we are asking from the management is that they come in and fill the gap of almost one million that will place us correctly. This institution has just refused to use internal resources to fill the deficit," Koech added.

Koech said the institution has been adamant to acquire almost Sh 1 million for them to be placed in the correct job groups with the correct salaries.

“We are agitating over that because other institutions have had bigger deficits but they have used income generating units to settle that,” Koech added.

Uasu organising secretary Onesmus Mutio asked vice chancellors from other institutions to pay their staff enhanced salaries as per the signed CBA.

“A promise is not the actualisation, and what I can tell other university managements is that they need to honour the 2017-2021 CBA and pay their lecturers and staff enhanced salaries," Mutio said in a phone interview with the Star.

The workers and management had a meeting on Wednesday morning but could not reach a consensus.

The highest-paid academic staff are professors, who earn Sh283,087.