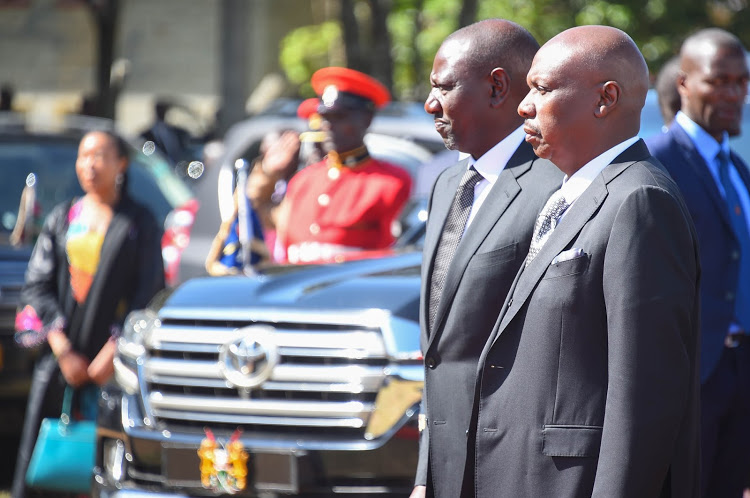 A showdown is looming between Deputy President William Ruto and Kanu boss Gideon Moi following revelations that Gideon will enter the 2022 presidential race.

Ruto has been the undisputed king of Rift Valley politics after replacing former President Daniel Moi, however, Gideon is scheming to reclaim the crown.

The rivalry sets the stage for a major clash.

The Star has established that Gideon, the scion of the second president, is raring for a fight with Ruto and already has assembled technocrats crafting his manifesto.

Gideon's think tank has been toiling for three weeks to compose a distinct blueprint to be unveiled immediately after the Baringo senator officially launches his presidential bid.

The six-member team is housed within Nairobi's Kilimani area.

On Monday, Kanu secretary general Nick Salat said Kanu had decided to "chart its own path" and field a presidential candidate next year. He is one of Gideon's confidants.

The announcement could likely mark the beginning of the end of the One Kenya Alliance, an amorphous outfit that was to be the vehicle for Gideon and three other leaders. They are Wiper's Kalonzo Musyoka, ANC's Musalia Mudavadi and Ford Kenya' Moses Wetang'ula.

“As Kanu, we are going to have our own presidential candidate in 2022, the name of our candidate is going to be unveiled before the end of the month,” Salat said.

He did not explicitly say Gideon would be Kanu's presidential candidate, saying party organs must officially clear the candidate to avoid a backlash from "potential hopefuls".

"Those having evil plans of stealing taxpayers' money should know their days are numbered."
News
1 month ago

As boss of the Independence party, Gideon is not expected to encounter party rivals.

Gideon could chip away substantial votes from Ruto, especially among their common Kalenjin community in Rift Valley.

However, former Roads Cabinet Minister Franklin Bett said Moi’s entry would not have a major impact in reshaping the contest.

“The 2022 battle is a two-horse race between Raila and Ruto. Let nobody cheat you that a third force will shake the political landscape," the former State House comptroller said.

He said Rift Valley would vote almost to a man, and woman, in the general election. Gideon will not threaten the DP's fortunes in the vote-rich region, he said.

“The ground is with Ruto and if you are not with the wheelbarrow then you will be swept away in Rift Valley,” Bett predicted.

Gideon has spoken of running for President but recently hinted strongly to Kanu delegates at his Kabarak, Nakuru, home that his eyes are set on the presidency.

“I do not want to state the obvious, it is in the public domain that I will be on the presidential ballot,” Gideon told his supporters.

Since 2013, Gideon has been the Senator for Baringo county on  Kanu's ticket.

Some observers say Gideon's run could sound the death knell for Oka and its three remaining principals.

Oka has been teetering the brink of collapse as each of the principals wants to fly the alliance’s presidential banner.

Gideon’s bid could be the last nail in the coffin.

On Monday, Salat suggested Oka has outlived its usefulness. With the collapse of the Building Bridges Initiative, he said, Oka is as good as dead and Kanu will have to "move on.

Like a general parading his forces for battle, the senator has hit the ground running.
Siasa
7 months ago

“Oka would only have survived if BBI went through. It was reliant on BBI. With the two missteps at the High Court and the Court of Appeal, the situation does not favour Oka. It is time for Kanu to repackage itself and go out there to speak to Kenyans directly,” Salat said.

He went on, “The utterances that are also coming from the people concerned in Oka do not augur well and time is also not on Oka’s side.”

The BBI process, declared unconstitutional by the courts, had proposed a total reconfiguration of Kenya's governance structure. It proposed the reintroduction of Prime Minister and two deputies.

The posts could be dangled and offered to Oka for its support.

The proposed constitutional amendments also provided for appointment of Cabinet Secretaries from Parliament. This, too, could accommodate the big boys.

The changes were providing a window for the appointment of Cabinet ministers from Parliament in what was seen to be part of an elaborate plan to accommodate the big boys.

Salat's pronouncement raised questions about the role Gideon's Oka partners would play were he to run for President.

Political analysts concur the Oka outfit has no chance of survival in the face of competing interests as well as lack of clear positions to be shared in any power deal.

Gideon's candidature, it is claimed, could be part of larger machinations to reduce DP Ruto's grip on Rift Valley.

"Nobody should underrate Gideon in Rift Valley. He has the resources to give Ruto a run for his money. Look at it in the bigger [President] Uhuru Kenyatta succession matrix," an Uhuru supporter from Central Kenya said.

Uhuru has been positioning Raila as his heir after falling out with Ruto. He is said to be going flat out to have his confidants market the ODM boss as the best bet for Mt Kenya's interests.

University of Nairobi lecturer Herma Manyora said while Gideon will not win the presidency, the endgame is ultimately to make him President.

“In 2022, he might not get it because those schemers don’t want it to be a dynasty contest but they will try to make him President in 2027,” he said.

The President has been working on a larger political machine that includes Raila and the Oka principals to take on Ruto next year.

However, the move to unite Raila with his ex-Nasa chiefs hit a dead end after the fall of BBI. Gideon's presidential bid is considered part of a fresh plan to limit the DP's influence.

Former Eldama Ravine MP and ex-Gideon ally Musa Sirma said  Rift Valley is solidly behind the DP. He called it a "costly gamble" for anyone to try to dethrone Ruto.

“In Rift Valley, I can't tell you there will be no contest between Ruto and Moi...it is a no contest and anybody who wants to try should not even attempt it,” Sirma said.

He went on,“I have been a politician for so many years and it is either you are with Ruto in Rift Valley or walking into your own political oblivion.”

The politician last month  dumped Gideon and joined Ruto's hustler nation. It was seen as a major blow to the Kanu chairman's efforts to penetrate Rift Valley.

Since Moi's death, there has been a struggle over who will lead the community
Counties
7 months ago

Says Kenyans are aware DP Ruto is seeking to succeed his boss.
News
1 month ago

Raila to meet political leaders from Kajiado, Narok and Samburu counties on Monday.
News
4 days ago

Says leaders had no capacity, will or plan to move the country forward.
News
1 week ago