• In an affidavit by Chief Inspector Maxwell Otieno, the prosecution said Jowie got into a fight at Club 1824 in March this year while out on bail.

• They have alleged that Jowie resides in Nairobi and works in a private security firm, adding he is a regular at the club in Lang'ata. 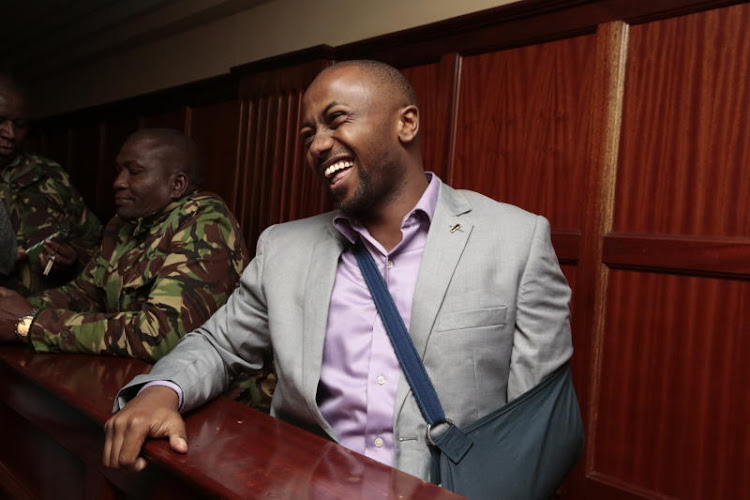 Joseph 'Jowie' Irungu charged alongside Jacque Maribe for the murder of Monica Kimani risks return to remand prison if the court cancels his bond.

In June, the Director of Public Prosecutions applied to cancel Jowie's bond. The office argued he has violated the conditions for his released set by Justice James Wakiaga last year.

In an affidavit by Chief Inspector Maxwell Otieno, the prosecution said Jowie got into a fight at Club 1824 on March 7 this year, while out on bail.

“Jowie assaulted Rodgers Okuta but even though the complaint was withdrawn, it is quite clear he has proceeded to commit a similar offence or crime resulting in bodily injury of another person while out on bail,” the affidavit reads.

Otieno also said Jowie has also violated court orders barring him from commenting, discussing and posting anything in regard to the murder case by giving interviews on two YouTube channels

“We pray this Houralbe Court affirms that Jowie’s bail stands canceled and proceeds to commit him at Industrial Area remand prison or any other remand prison,” Otieno said.

Justice Wakiaga had ordered Jowie to report monthly to the area chief in Nakuru where his parents stay so he can submit a report to the court. No report has been submitted to date.

“I have confirmed the accused does not live with his parents at Nguta Estate, Nakuru county. [He] does not assist his parents with their poultry farming as he is not living with them,” Otieno said.

The prosecution said Jowie lives in Nairobi and works at a private security company. He is a regular patron of club 1824 in Lang'ata, prosecutors said.

The prosecution accuses Jowie of violating court orders by moving and residing in Lang'ata, which is the secondary crime scene. It is also the locale of potential witnesses who are yet to testify, they said.

The court will rule on the application on September 28 and decide whether Jowie's bail will be cancelled or not.

Jowie, Maribe murder trial to be heard in open court next month

Prosecution has seven more witnesses to go, 20 have already testified
News
4 months ago

Maribe on dating Jowie: I believe our relationship was rushed

Maribe clarified her relationship with Jowie ended even before he was sent to prison.
Sasa
9 months ago
by ANNETTE WAMBULWA Court Reporter
News
14 September 2021 - 23:00