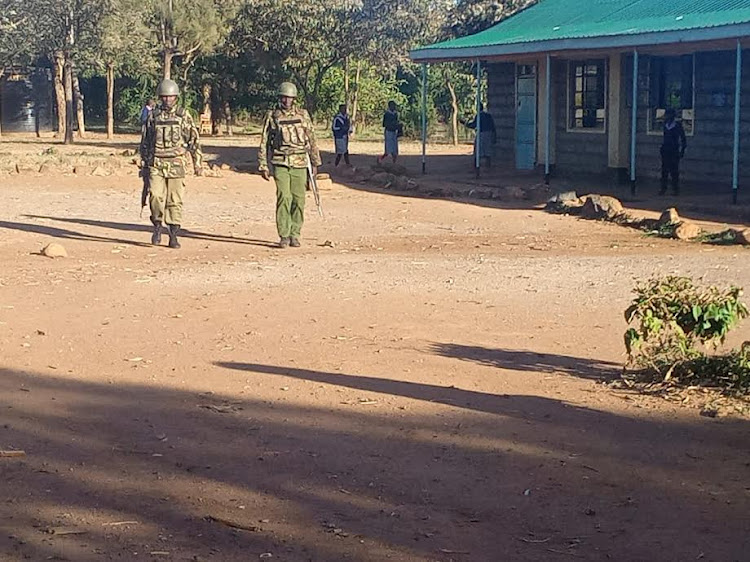 Armed police in a school in Laikipia to provide security as schools reopened in the area on September 13..NPS

Schools on Monday reopened in parts of Laikipia that have been troubled by incidents of insecurity in recent weeks.

More elite police officers landed in the county to boost ongoing operations to flush out armed bandits who have been terrorising residents.

They were seen manning some of the reopened schools as learners reported.

Security personnel from the Border Patrol Unit of the Administration Police Service, who have been operating in the northern part of the country fighting al Shabaab terrorists joined the other teams who were already on the ground and pushed away herders who were still on the affected ranches.

Police spokesman Bruno Shioso said the area was calm and normalcy had been restored.

"We are certain things will be fine. The area is calm and schools have reopened," Shioso.

This came a week after another NSC meeting on September 6 ordered a raft of measures to be taken to ensure the safety of residents and especially ranch owners.

Officials aware of the plans said the Monday meeting was meant to brief the President who is the chairman of the top security organ on the progress of the developments on the ground.

They told the President most of the armed herders had been driven from the ranches and that those whose houses had been torched had had them reconstructed or would be reconstructed soon.

The meeting prompted security chiefs led by Matiang’i, Chief of Defence Forces Gen Robert Kibochi, Mutyambai and his APS deputy Noor Gabow to camp in the area for three days to oversee the ongoing operation.

This is because the President had ordered the operation to be carried out within a week, which ended yesterday (Monday), officials aware of the developments said.

The operation started with the declaration of a dusk-to-dawn curfew in Laikipia Nature Conservancy, one of the largest ranches affected by the insecurity.

Matiang'i said that Laikipia Nature Conservancy and its environs had been immediately declared a disturbed area and therefore a security operation zone.

He gazetted the creation of a new subcounty named Kirima to be headquartered at Ol Moran to tackle insecurity in the area.

The move is expected to bring government and security agencies closer to the backwaters of Sipili and Ng'arua.

The CS also said a training base for elite police units will be established in the area to enhance police presence and serve as a buffer zone between Laikipia residents and invaders from neighbouring counties.

Surveyors will also be sent to Laikipia to expedite the titling process and review/recommend action on lapsed leases or those about to lapse.

“We will engage relevant ministries and agencies on the ideal management of the Laikipia Conservancy to mitigate its attraction as a conflict hotspot,” Matiang'i said.

The multiagency teams intensified operations on Monday to flush out bandits on private ranches. The bandits have been blamed for more than 10 deaths including three police officers. Many residents have also been displaced from their homes.