Raila to meet political leaders from Kajiado, Narok and Samburu counties on Monday. 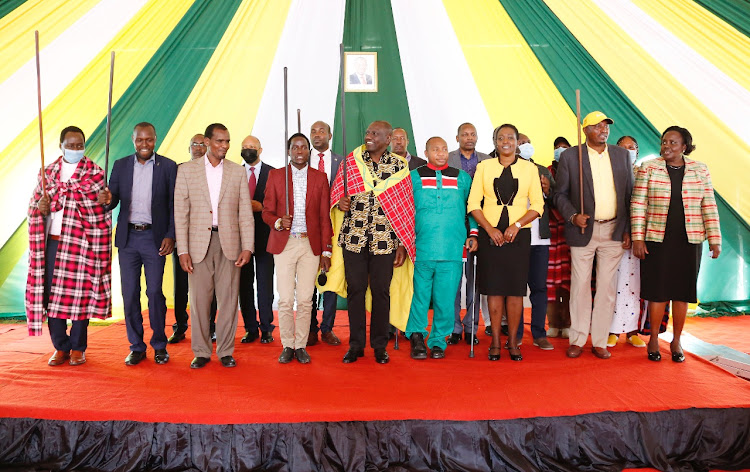 ODM leader Raila Odinga has embarked on a fresh charm offensive to woo back the Maa community which is drifting towards Deputy President William Ruto.

The DP has for the last five years put up spirited campaigns to have a firm grip on the Maa community and edge out Raila who has received unwavering support in the previous presidential elections.

On Monday, the former prime minister who is expected to face off with Ruto in the August 9,2022 presidential race  will meet various political leaders from Kajiado, Narok and Samburu counties.

The meeting, which will take place at Enchula Resort in the outskirts of the Kajiado  town, will bring together political and grassroots leaders from the three counties.

Narok North MP Moitalel Ole Kenta, a key Raila ally, said there is a need for the Maa community to unite and discuss their issues and the direction they will take in the 2022 election.

In a telephone interview with the Star on Sunday, Ole Kenta who said he will be attending the meeting said they will push for interests of their pastoralist community.

“While I am not privy to the details of the meeting, what is paramount to the Maa community is the unity of purpose and the development agenda that we as the leaders must push for our people,” he said.

Analysts say Raila's efforts to firm up his strongholds through his “Azimio la Umoja”, which he launched in Nakuru county and has been held in Nyanza and Western regions, has lifted the lid on his plans for a fifth stab at the presidency. 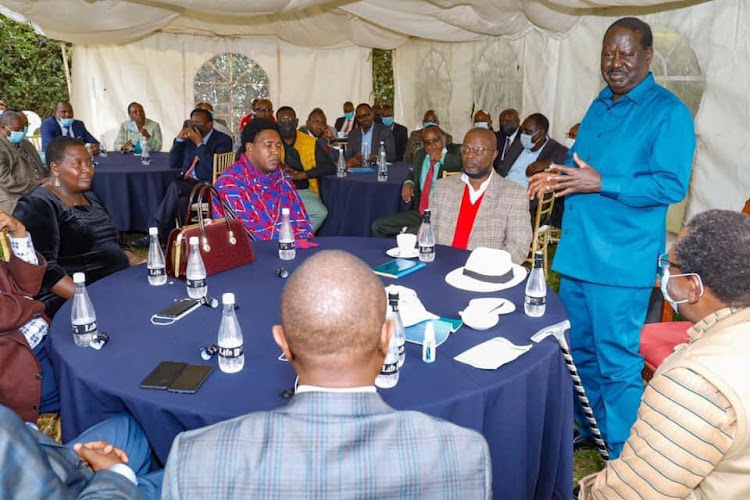 ODM party leader Raila Odinga when he commiserated with the family of the late William Ole Ntimama following the passing of his widow, Mama Dorcas Ntimama.
Image: ODM

On Saturday, Raila will be in Mombasa selling his State House bid agenda.

Nominated MP David Sankok said the pastoralist community “chose long ago to rally behind the DP and it is too late in the day for Raila”.

He said Raila, who has lost four presidential races,  should retire from active politics and allow other leaders to take over national leadership.

“If you study keenly, in the last election, Jubilee Party through the efforts of the Deputy President gained a lot in the Maa counties. Samburu, Kajiado and Narok have their governors from Jubilee and majority of MPs and MCAs,” he told the Star on phone.

He added, “This tells you that the support that Raila once had in these areas is gone. The DP is the preferred next president for Kenyans. He has a good track record of development and we have chosen to support him because of that. Raila is welcome to the race but he should be ready for another defeat.”

The DP, who has been hosting huge delegations from Narok and Kajiado, is keen to have all 14 counties in his Rift Valley home turf “speak in one voice".

Outgoing Turkana Governor Josphat Nanok, who also sits in Ruto’s strategy team, is in charge of consolidation of Rift Valley -Kalenjins, Maasais, Turkanas and Samburus who dominate the former province.

The political support of the Maasais and Turkanas has been almost evenly split between President Uhuru Kenyatta and Raila in the last two presidential polls.

ODM also nominated Judith Pareno to the Senate. In Turkana county, ODM won the governor's seat and Loima, Turkana East and Turkana Central. Other than Loima MP Jeremiah Lomorukai, Governor  Nanok and the two ODM MPs are now leading the Ruto crusade in the Northern county.

Most governors in the expansive Rift Valley are already backing the DP as are most MPs, senators and other influential leaders.