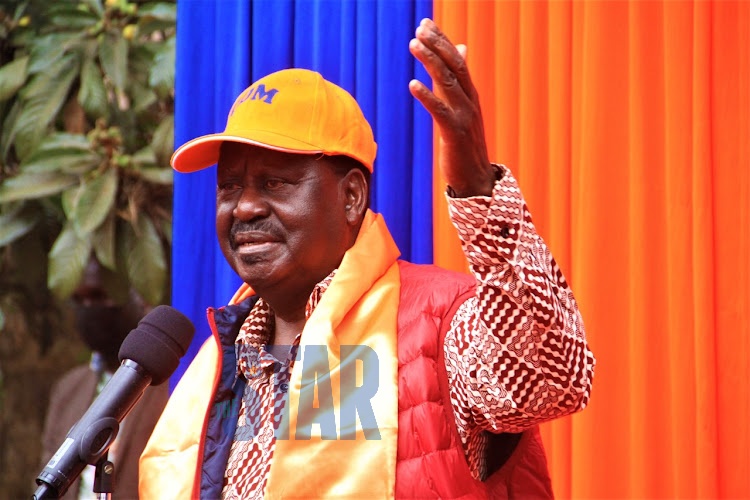 ODM leader Raila Odinga on Monday got a boost in his march to State House after Maa community top guns backed his bid to succeed President Uhuru Kenyatta in 2022.

A number of high profile Maasai leaders declared their support for Raila’s presidency promising to rally the community behind the opposition leader during next year’s polls.

Among the pastoralist community, Kaparo was a critical cog in Ruto’s team and was credited for swaying the region towards UhuRuto in 2013 and subsequent 2017 General Election.

He was elected Kajiado governor on Jubilee ticket in 2017 after trouncing an ODM incumbent governor.

In announcing his decision to dump DP Ruto, the former House Speaker said the community is safer in the hands of the ODM boss who will be making a fifth stab for the country’s presidency.

The former chairman of the National Cohesion and Integration Commission made the announcement on Monday during Raila’s regional consultative meeting in Kaijiado.

Kaparo said Raila is the only leader who has the interest of the Maa community at heart among all the other aspirants who have shown interest in the 2022 presidential elections.

He said some politicians abandoned the community immediately after forming government despite making promises to address problems of the Maasai community.

“I have come because I want to help him (Raila). I am not a member of either ODM or Jubilee. I don’t belong to any political affiliation but I have a vote, a voice and influence,” he said.

"I have come to use my voice, my name and wisdom to help Raila and whoever is unhappy what will he or she do? Even if I am not a member of ODM or Jubilee parties, let me tell you the truth, the man (Raila) cannot harm the Maasai community.”

He called on the ODM leader to remember the community if he forms the next government.

“We helped some people last time who promised to form a pastoralist government. We crisscrossed the country campaigning and after clinching power, pastoralists were forgotten including myself.”

The declaration points to a major shift in the region’s politics ahead of the next year’s polls.

Tobiko vowed to rally the region in supporting the ODM boss in the coming elections.

He said unlike other aspirants who have contributed to the land problems of the community, Raila has sacrificed his political career for the community during the coalition government when he stood firm for the reclamation of Mau forest.

He added, “Some leaders have been involved in some activities like land grabbing that marginalised the Maa community further. As Maa community there is no other choice.”

"Please ensure Maa nation sits on the negotiation table, we don't want to be part of the menu."

Lenku said the over a million votes from the pastoralists community will no longer be a swing vote but will be channeled in one direction.

"Your record is clear and your main competitor has been Uhuru Kenyatta and now that you are coming together you will get all the votes," Lenku said.

In his speech, Raila wooed the Maa community promising to address some of the historic injustices the community has suffered since independence.

He cited the issues of land, marginalisation, human-wild life conflict, retrogressive traditions, environmental degradation and poverty as some of the injustices the community has suffered and which has held them back.

“We are all concerned about historical and current marginalisation of some parts of Kenya and the Maasai. That is why we came up with counties in the 2010 Constitution which others opposed. It is the reason we will continue to push for more funds and resources to be devolved to counties,” Raila said.

“This time round, and going forward, you must stay put and fight at the table where all communities are gathered.”

He said BBI would have provided additional billions to the four pastoralists counties to enable them catch up with the rest of the country.

Under BBI, Raila said financial allocation to Kajiado would have risen by Sh6.3 billion from the current Sh6.4 billion to Sh12.8 billion.

Narok would have received Sh5 billion more while Samburu’s allocation would have risen by an additional Sh2 billion.