• Diseases include the Maize Lethal Necrosis Disease and the Cassava Brown Streak Disease, and most recently, a new variant of the Citrus greening disease. 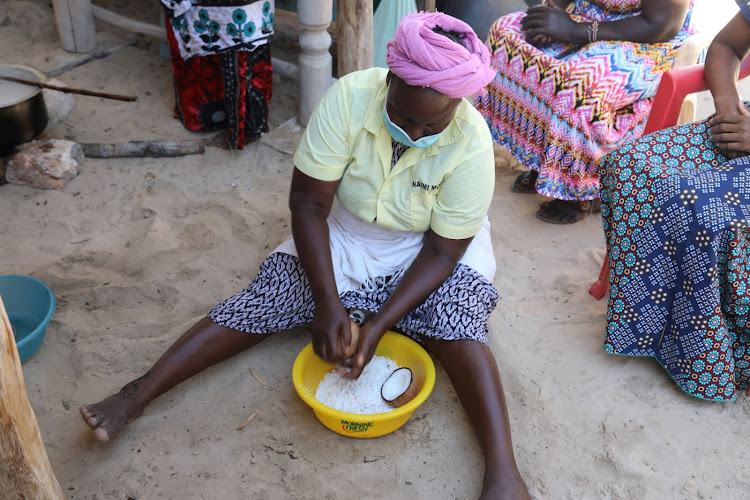 A Member of Baharini womengroup beach operators in Malindi preparing coconut to make coconut oil at their place of work to help them earn a living after the tourism sector suffered due to the Covid-19 pandemic
Image: ALPHONCE GARI

Kenya is on high alert following a reported outbreak of coconut yellow necrosis diseases in Mozambique.

Kenya Plant Health Inspectorate Services managing director Theophilus Mutui said they were vigilant to ensure the disease does not spread into the country.

“The disease is devastating to the coconut crop and it has wiped away all the coconut or the crops have died because of the disease in the coast of Mozambique,” he said.

He spoke on Monday during the opening of the third phytosanitary conference being held at Kephis headquarters.

Mutui said Kehpis is conducting test surveillance within the coastal region to ensure that the disease doesn't spread.

“If detected, logging will be done and we remove it and burn to avoid spread. But so far the disease has not been reported at the Kenyan coast where coconut is grown," he said.

He added, "We will keep vigilance to ensure that is not introduced and if by bad luck, the disease is introduced, we will stop its spread and establish thorough mitigation measures like logging, burning and any other management practice.”

Coconut is produced in the coastal counties of Kilifi, Kwale, Lamu, Mombasa, Taita Taveta, Tana River but there are potentials in other counties including Tharaka Nthi, Meru, Makueni, Machakos, Busia, Homa Bay and Siaya.

Ministry of Agriculture statistics indicate that there are over 10 million trees out of which an estimated 1.3 million are less than 10 years old.

Another 6.5 million are bearing and 2.6 million are above 60 years of age and therefore considered senile with very low production volumes.

The coconut tree produces nuts throughout the year. However, harvesting is done three or four times annually depending on the rainfall amount received.

Mutui said they were also undertaking surveillance on a new variant of the Citrus greening disease which he said is severe on citrus fruits.

He assured that Kephis is keen on ensuring that the disease does not spread along the coast region.

Globally, plants are increasingly facing threats from pests and diseases resulting from transboundary transfers of pests through international trade and travel among other reasons.

“Kenya has been struggling with new pests and diseases including the armyworm, desert locust, False Codling Moth, Fruit fly (which has prevented Kenya from exporting mangoes to Europe) and diseases such as the Maize Lethal Necrosis Disease and the Cassava Brown Streak Disease,” Mutui said.

He said there are management measures being put in place to ensure that the country continues to export its produce.

“Plant health is the lifeline of the food system. Without controlling the pests even if you feed crops and make soil fertile you cannot achieve the desired goals. The ministry has been carrying out training and capacity building in counties on how to control native and transboundary pests,” Douglas Kangi said.

Kangi is the director of Crops Management in the State Department of Crop Development and Agricultural Research.

Farmers fear they might not harvest anything
Counties
4 months ago

Says it will create employment for the youths and its export will mean more benefits
Counties
2 months ago
by AGATHA NGOTHO Science Writer
News
13 September 2021 - 23:00