• The AU aims to interconnect African capitals with each other to ease the movement of goods and people across continents.

• Kenya has launched a new high-speed railway from Mombasa which is to extend to South Sudan, DR Congo and Burundi, at a cost of some 5.2 billion US dollars. 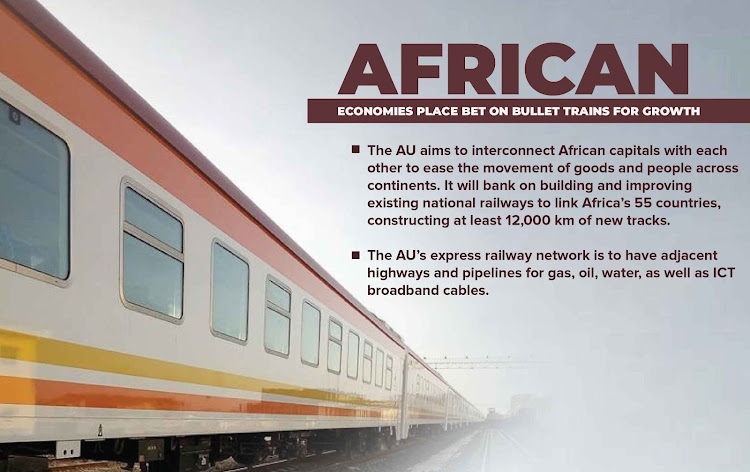 African states are ramping up investment in rail infrastructure with billions of dollars earmarked for high-speed train networks to spur economic growth through the fast movement of people and goods.

In 2018, Morocco trail-blazed for its African peers when it unveiled the continent’s first bullet train, LGV, with a top speed of up to 320 kph (199 mph) to connect the economic hubs of Tangier and Casablanca.

As of April last year, the line carried over 3 million passengers since operations began in the fall of 2018, although the pandemic has since slowed traffic.

Emulating Morocco, Egypt this week inked a 4.45 billion US dollars deal with Siemens Mobility to build a high-speed electric rail line, linking its Red Sea and the Mediterranean.

With its partners, Orascom Construction S.A.E. and The Arab Contractors, Siemens will provide its comprehensive turnkey services to design, install, commission, and maintain the systems for 15 years.

It is the first contract to be signed from the agreement sealed between Egypt’s National Authority for Tunnels (NAT) and Siemens Mobility, Orascom Construction and The Arab Contractors in January 2021.

According to Innovation Village, the contract is part of the initial 660 km out of the 1,800 km rail network planned for revamping.

Plans are also in the pipeline for two other high-speed railway lines including rail infrastructure and trains, and maintenance in the coming months.

In 2020, South Africa’s Department of Transport announced it planned to introduce a new High-Speed Rail (HSR) network in the country.

A parliamentary paper seen by bird shows the HSR will be set up under a five-year development target, meaning it will be implemented, at the earliest, by 2025.

Africa’s rail development comes on the back of an ambitious multi-billion project christened African Integrated High-Speed Railway Network (AIHSRN) under the African Union's Agenda 2063 of 2013.

The AU aims to interconnect African capitals with each other to ease the movement of goods and people across continents.

It will bank on building and improving existing national railways to link Africa’s 55 countries, constructing at least 12,000 km of new tracks.

The high-speed rail is designed to be a steel web that runs through Africa longitudinally and latitudinally, passing through African capitals along the way.

The AU’s express railway network is to have adjacent highways and pipelines for gas, oil, water, as well as ICT broadband cables.

“The proposed high-speed train is part of an Africa which is 20 per cent of the Earth's surface, covering 30.2 million km2 with a population of about one billion in 2010 and whose growth is expected to double in 2050, far more than China in 2025 and India in 2030,” reads a section of the intergovernmental outfit’s master-plan.

Elsewhere, the construction of a faster, standard gauge railway is ongoing in East Africa.

Kenya has launched a new high-speed railway from Mombasa which is to extend to South Sudan, DR Congo and Burundi, at a cost of some 5.2 billion US dollars.

In neighbouring Tanzania, the Dar es Salaam-Kigali link will be combined with the Kampala-Kigali-Bujumbura, as well as the Walvis Bay-Windhoek-Gaborone-Pretoria, which have been identified as pilots for accelerated development.

Another railway is in the pipeline, along the West African railway loop, linking Benin, Burkina Faso, Niger and Cote d’Ivoire (Cotonou-Niamey-Ouagadougou-Abidjan Railway).

At the same time, Nigeria is planning to shell out billions of dollars on upgrading its rail network in coming years, with 5 US dollars worth of projects flagged off in 2021 alone.