Abdulswamad: Growing up as Nassir's son and charting my path

He has been an ODM member for more than 10 years.

• He credits Raila Odinga with his political development 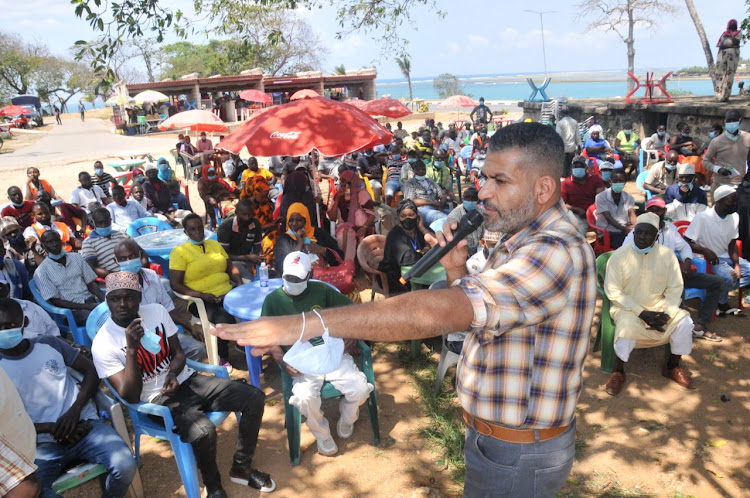 Abdulswamad scheduled an interview with the Star at 1pm on Tuesday at Trademark Hotel, Nairobi, where he was chairing a sitting of the National Assembly Parliamentary Investments Committee.

On arrival, however, he had already left. On calling him, he said “the party leader” had summoned him for a brief meeting, referring to ODM leader Raila Odinga.

When he returned, it was already minutes to 2pm, and he was ready for the committee’s afternoon sitting. The interview had to be rescheduled for the following day, same time, at the same place.

But on Wednesday, it played out the same, only this time he needed to have some time at the gym, which he has to every day. He had a meeting at 6.30 am and did not have time to work out. He had to do it over the lunch hour.

He requested that because the afternoon committee sitting—in which a team from the Kenya National Highways Authority was appearing to answer audit queries—would take an hour or two, we have the interview thereafter.

For every matter raised by the auditors or answered by acting Kenha director general David Muchilwa and his team, the MP took them to task and enquired from members whether they had questions or were satisfied with the responses.

At the end of the sitting, he had two other meetings and so we had to get into his car for the interview.

“I used to sleep eight hours, then six and now I am only sleeping for four hours. Yesterday, I slept at 11:30pm and was up by 2:30am. I had my first meeting at 6:30am, came here, got my briefs and held some meetings, then went to the gym and later to another meeting, then came back here. I still have two more meetings,” he says as we leave Trademark Hotel.

So busy and hectic is his schedules that he says he had to give up his business interests for the sake of his family and constituents. Abdulswamad returns all calls.

While you would expect him to be driven in an SUV, as is the case with 'waheshimiwa', he is using a Toyota Allion. He says while he doesn’t mind a big car, “sometimes there is what is feasible.”

The Mvita MP says he has to put in extra hours to ensure everything is in place.

The young Nassir has been a staunch ODM member for more than 10 years. While he notes it is not Raila who pulled him to politics as he comes from a political family, he says the ODM chief has been with him all the way, offering the much-needed support.

"I look at mzee with a lot of respect. My political career has been with Raila since its inception. We consult each other on a number of things. Like yesterday, he called and treated me for lunch at Nairobi Club,” he says.

Abdulswamad is a strong believer in devolution and credits Raila with the system.

“Raila, whether you like him or not, is the father of devolution in Kenya. He is among the people who pioneered and pushed for the modern-day devolution,” he says.

Abdulswamad, once a radio presenter in Mombasa, made his first shot at the Mvita seat in 2013 and won. He says he is a consistent leader.

“As long as you are consistent, nothing else matters,” he says.

Asked how it was growing up as Nassir's son, Abdulswamad says it was no different. His father brought them up in “very normal circumstances”.

“Immediately I finished school, I would accompany him wherever he would go. What would happen, if he leaves Nairobi for Mombasa by flight, I would be put in a bus or a vehicle and follow him there. I was never made to live as if I am being spoonfed. My father brought us up like everyone else.

“I studied in public schools. Other than my three years at Coast Academy, the rest—Aga Khan Primary and Lenana School—were public schools,” Abdulswamad says amid phone calls.

He says he was reelected because of his consistency at the constituency level, as well as his representation of the people of Mvita in Parliament. He is among the most vocal contributors to House debates.

Kisauni, Mvita and Nyali have the highest number of voters.
Counties
3 weeks ago

Abdulswamad, who has declared his bid for Mombasa governor, says he has prioritised education in his constituency.

“I have never left my people unrepresented. I have always represented them in whatever I do. I am now going for Mombasa governor,” he says.

If he becomes governor, he would want more public participation and engagement in county development.

While not many a politician would come forward to claim and defend it, Abdulswamad says he believes he has maintained his threshold in as far as his record constitutionally, ethically, morally and legally.

He is responding to the question on graft in the country and counties and says, “Corruption is not something that will end instantly. Fighting it starts with me and you and slowly, we will be able to get there. There is no doubt devolution has devolved corruption but where there are challenges, we should be able to overcome them together.”

Chairing the PIC, Abdulswamad handled the infamous Kemsa Scandal case. Asked how he handled the matter despite it involving powerful individuals, he says he did not look at it politically.

“Everyone mentioned appeared. When such an issue comes to your committee, you have to put politics aside and look at everything else in the interest of Kenyans. Do you know my party leader has never bothered to call me and tell me to help this one or help that one since I became PIC chair? He tells you, ‘young man, just do your job’.

“That is why my committee has been able to summon Cabinet secretaries, put an embargo on certain companies not to do business with the government, some people not to hold public office and the EACC to investigate certain individuals, recover money lost in billions,” he says.

Asked whether there were individuals who attempted to sway him during the probe, he says there weren’t, probably because “when you set yourself with your reputation, it is not as easy as that to be approached. And even the other members knew what we were supposed to do. For me, I was not approached and I don’t think any of my colleagues was,” he says.

For those who knew him before he joined elective politics, Abdulswamad was not trim. He says at some point, he weighed 130kg. He has been able to go down up to 78kg. He currently ranges between 85 and 90kg.

What informed his decision to reduce weight? It all started with a trip to Dubai with his friend, Governor Hassan Joho, and he booked for skydiving.

“When they weighed me, they said, 'My friend, you are going to defy gravity.' From that day, there and then, I made a decision to work on my weight and change my life,” he says.

He is also particular about his dressing.

As we arrive at the venue of his next meeting, we touch on national politics and he says the numbers are on the ODM side.

As his parting shot, he says whoever desires to get into leadership should be ready to be a servant of the people. He says leadership is a calling.

"You either have it or you don’t. And wealth does not define us; character and what you make other people feel do."