Aladwa says the businessman should be ready to accept the method and outcome of nominations. 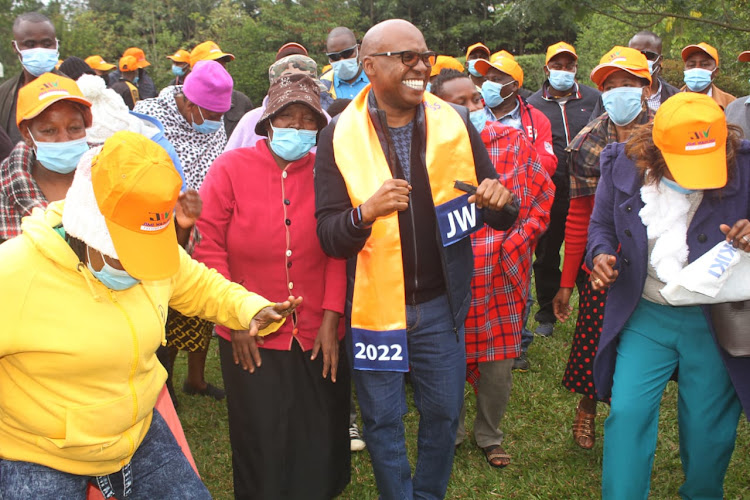 ‘I AM READY’: Jimmy Wanjigi to face Raila Odinga in ODM nominations race ahead of 2022 presidential elections.
Image: Kurgat Marindany

ODM has cautioned businessman Jimmy Wanjigi against engaging the party through the media.

This is even as it emerged that a section of party stalwarts were jittery about his candidature. The businessman has expressed interest in flying the party's flag in next year's general election.

Wanjigi has accused the outfit of plans to rig the upcoming presidential nominations to lock out some hopefuls.

The businessman has also asked Raila to pave the way for younger leaders.

In a series of letters to ODM secretary general Edwin Sifuna, Wanjigi has made a raft of demands that must be met in choosing the party’s 2022 flag-bearer.

He has threatened court action should the party ignore his demands, which include having delegates elect a presidential candidate.

“The upshot of contaminated elections is that your office will drag the party into unnecessary litigation processes as members seek justice and try to correct the wrongs and ultimately tear the party to pieces,” Wanjigi said in a letter dated September 9, 2021.

“Do not become the author of ODM’s demise through this obvious violation of the intent of the founders and members of this party.”

It is this latest move that has elicited sharp reactions, with some of Raila's allies expressing fear of a plot to frustrate the party’s nomination through legal suits.

Makadara MP George Aladwa has cautioned Wanjigi against dragging the party to court.

The Nairobi ODM party chairman said Wanjigi should be ready to accept the method and outcome of nominations.

“In a democracy, there is a winner and loser in every contest. Wanjigi should be ready to accept the decision of the party and the delegates,” Aladwa said.

“Taking the party to court to frustrate the process of picking the candidate is ill-advised. We will not tolerate.”

Speaking to the Star on Friday, Sifuna said he had not received the purported letter.

“I haven't seen the letter. It is a very curious situation that the person to whom the letter was addressed will see it last. We cannot correspond through the media,” Sifuna said.

Under his ‘Let the People Decide’ call, Wanjigi wants the party to issue him with a certified list of delegates who will be choosing the presidential candidate during the Orange party's national delegates conference.

He also wants the timing and mechanism for party primaries at the ward, constituency, and county levels to allow members to interrogate the leadership qualities and political intent of candidates across the board.

The businessman is also demanding that the list of delegates be digitally secured to ensure party democracy is upheld.

“My demand is simply that the spirit and the letter of the democratic tenets secured in the party constitution be followed. I fail to understand what you find difficult with that,” he said.