He called for peace, unity and stability to turn around the country’s economy and provide opportunities to Kenyans. 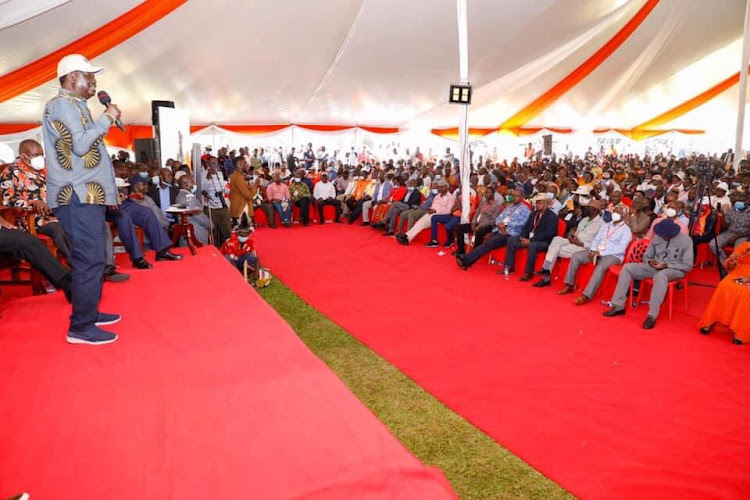 ODM leader Raila Odinga has embarked on the second leg of his efforts to consolidate his political bastions and break into new territories.

The campaign that will see him hold countrywide consultative tours will culminate into the unveiling of a big 2022 political machine in Nairobi next month.

It is expected that Raila will then formally launch his 2022 presidential bid as he seeks to succeed his handshake partner President Uhuru Kenyatta.

The opposition chief was in Kakamega on Friday where he highlighted some of his proposals to address the problems facing people of Western Kenya.

The tours christened Azimio La Umoja (Declaration of Unity) started in Nyanza last month and are viewed as building momentum for his official declaration for the country’s top job.

He called for peace, unity and stability to turn around the country’s economy and provide opportunities to Kenyans especially in the rural areas.

The ODM boss said no economic model – however well crafted – can thrive in an environment of violence and chaos.

“We have come to Western Kenya with a message of peace; unity and stability that will enable us to create lasting prosperity for the Mulembe nation and the country as a whole. This is why we started this journey last month, with a call to unity of the nation,” Raila said.

He added: “In our quest for a third liberation in which we seek lasting unity and stability of the nation, creation of viable and credible opportunities for our youth and prosperity for all, we once again need the partnership and active involvement of the Mulembe nation.”

“The time has come for us to cleanse our country of the spirit of anger and bitterness and the spirit of revenge and entitlement. We must get on to the path of reconciliation, unity and stability. We must embrace forgiveness,” he said.

Oparanya—referring to ANC boss Musalia Mudavadi's and Moses Wetang’ula’s (Ford Kenya) candidacies—said the region will not divide its votes in 2022, adding that the two leaders have no chance in the next polls.

On Monday, the Azimio La Umoja caravan will pitch camp in Kajiado for the third leg of the regional consultative forum.

The Monday meeting will bring the four counties of Laikipia, Samburu, Narok and Kajiado.

The team will then move to Mombasa on Saturday next week for another consultative meeting where all the Coast counties will converge and make a declaration.

The Coast meeting will be followed by North Eastern then Central before a final one at the historic Nairobi’s Bomas of Kenya in late October.

Suna East MP Junet Mohammed on Friday said the meetings are not ODM affairs but bring together all like-minded political parties.

“This is not an ODM function, this is for like-minded parties and we want Western Kenya to be part of this new movement,” Junet said in Kakamega.

The party started the regional consultations in Raila’s Nyanza backyard but called them off following a surge in the number of Covid-19 cases.

But speaking in Kakamega on Friday, ODM secretary general Edwin Sifuna said the meetings have been downscaled from the initial 100 people to 20 persons per county.

“This is part of series of meetings started in Sikri, Homa Bay county, but have been downscaled significantly.”