•The earliest possible Kenyan patients come from a region where Chinese nationals were building roads in 2019 and last year.

•In total, blood samples donated by 582 people from Kisumu and Kericho between January and March, last year, were tested, and 19 had Covid-19 antibodies. 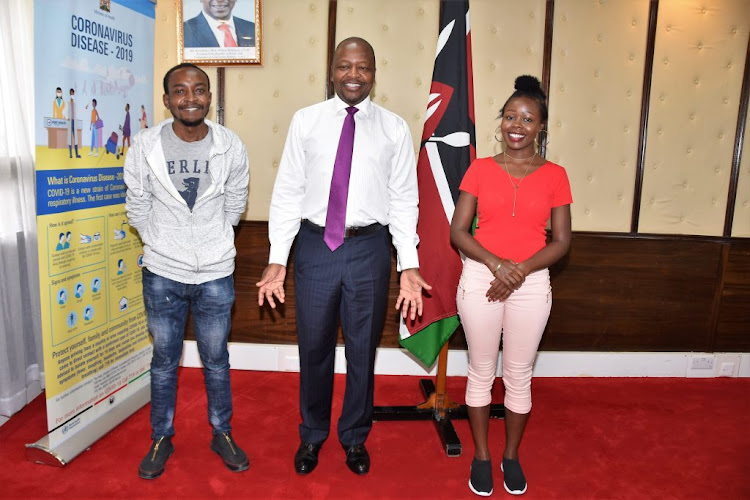 NOT THE FIRST: Health Cabinet Secretary Mutahi Kagwe with Brain Orinda and Brenda Cheruitich at Afya House after their isolation on April 1, 2021.
Image: MINISTRY OF HEALTH

The country’s first patients could instead have been three adults in Western Kenya, according to antibody tests on stored blood from Kisumu and Kericho.

They are a 69-year-old man, a 46-year-old man, and a 47-year-old woman, all of who had no symptoms when they submitted their blood samples in January last year.

“If participants in our study did have an asymptomatic infection, then such cases could have contributed to early undetected spread of the pandemic in Kenya,” researchers who tested the blood said.

Their findings, titled “SARS-CoV-2 Antibody Prevalence in People with and without HIV in Rural Western Kenya, January to March 2020”, are published in the Aids journal this month.

The researchers said it is not unusual that these cases are away from Nairobi and Mombasa where SARS-CoV-2, the virus that causes Covid-19, was believed to have been introduced into Kenya.

The Kenyan adults come from a region where Chinese nationals were building roads in 2019 and last year.

“Some of the earliest known cases of Covid-19 in Africa were imported by manufacturing workers who travelled from China to Egypt and it is possible that SARS-CoV-2 could have reached the otherwise remote region of our study similarly via construction workers,” they said.

In total, the researchers tested blood samples donated by 582 people from Kisumu and Kericho between January and March last year.

Antibodies in the blood are taken as evidence of coronavirus infection and can be detected as early as two weeks after a person is first infected.

Nineteen people had SARS-Cov-2 antibodies, with the three adults being the earliest in January.

However, it can be difficult to distinguish antibodies that neutralize SARS-CoV-2 from antibodies that fight other coronaviruses, including some that cause the common cold.

Tests on the Kenyan samples are therefore not definitive, and the results may represent cross-reactivity from other infections.

“These may represent cross-reactivity or asymptomatic infections that predated the first reported Covid-19 cases in Kenya,” the researchers said.

However, data from other countries also suggest that SARS-CoV-2 was circulating weeks or months before initial cases were detected.

“Further research is needed to distinguish the two possible explanations for detectable SARS-CoV-2 antibodies in our study,” the researchers added.

It was principally donated for the ongoing African Cohort Study, a project of the US military HIV research programme in Kisumu and Kericho.

The pandemic coronavirus emerged in Wuhan, China in late 2019.