ASAL leaders scheme to lock out Ruto from northern Kenya

The leaders will be supporting politicians who are in the President's camp. 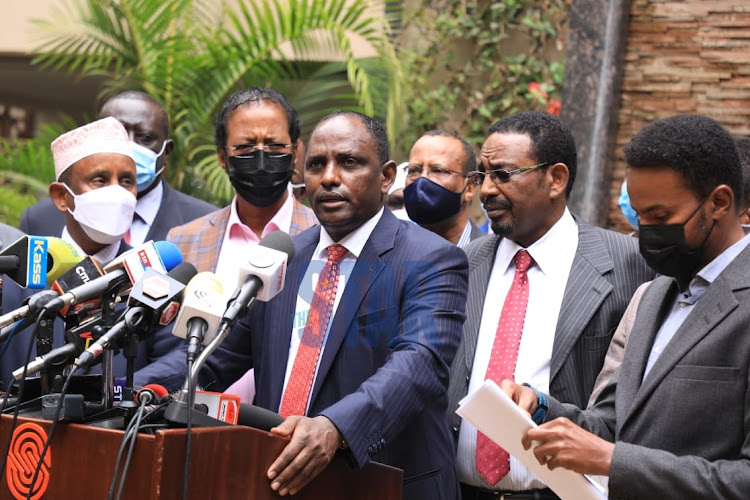 CS Treasury Ukur Yatani accompanied by other leaders from Northeastern speaks during a press briefing in Nairobi on September 2, 2021.
Image: WILFRED NYANGARESI

A section of leaders from northern Kenya has hatched a plan to lock out Deputy President William Ruto from the region ahead of the 2022 elections.

The leaders are urging their respective communities to rally behind President Uhuru Kenyatta, ODM leader Raila Odinga and One Kenya Alliance principals.

Eldas MP Adan Keynan revealed that leaders from the region will be supporting politicians who are in the President's camp.

“We are in a political season and as leaders from Arid and Semi-Arid Lands call upon our communities to be firm and resolute in support of President Uhuru, the handshake and OKA,” Keynan stated.

With less than a year to the end of his second and final term, Uhuru's relationship with his deputy has hit rock bottom.

The President has been consolidating his new alliances as he sidelines old ones, mainly comprising of the Deputy President and his allies.

Uhuru has accused his deputy of doing early campaigns to succeed him, instead of focusing on their legacy projects.

The Deputy President, on the other hand, sees the move to limit his likely bid as a betrayal of their pre-2013 pact.

Speaking in Nairobi during a meeting of ASAL leaders on Thursday, Keynan said communities from northern Kenya have common problems and challenges.

“We will be convening meetings to chart a new path. We will be collecting our ideas together to address our interests as one,” he stated.

The group released a statement saying leaders from ASAL region and the Upya Movement will continue with their unwavering support for Uhuru's leadership and administration.

It came barely a week after the leaders launched Upya Movement to champion the interests of ASAL ahead of the 2022 general election.

Garissa Senator Abdul Haji said the outfit seeks to negotiate for socio-economic investment and development for the region.

“Upya movement will unite residents from ASAL areas to articulate a common political position and objectives for the 2022 election and negotiate for development,” the senator stated.

On September 8, leaders from Garissa, Isiolo, Lamu, Mandera, Marsabit, Samburu, Tana River, Turkana and Wajir met Uhuru at State House, Nairobi, and expressed their gratitude for including them in his administration.

They thanked Uhuru for appointing persons from ASAL to influential national leadership positions and for initiating major infrastructural development projects in northern Kenya.

The ASAL leaders further assured the President of their unwavering support for his leadership and administration and pledged to follow his lead ahead of the 2022 General Election.

Keynan called on communities from northern Kenya to join Upya Movement, saying it will give them a seat at the table where critical decisions are made.

He said the region has been supporting other groups in the past and they had decided to chart a new path.

“This time around, we have decided as a group to support the initiatives by President Uhuru Kenyatta, the handshake and the OKA group,” he said.