• In a statement on Thursday, Magoha said 1,129,637 have been placed in Form one in public and private schools.

• Some 2,658 have registered to resit the 2021 Kenya Certificate of Primary Education examination. 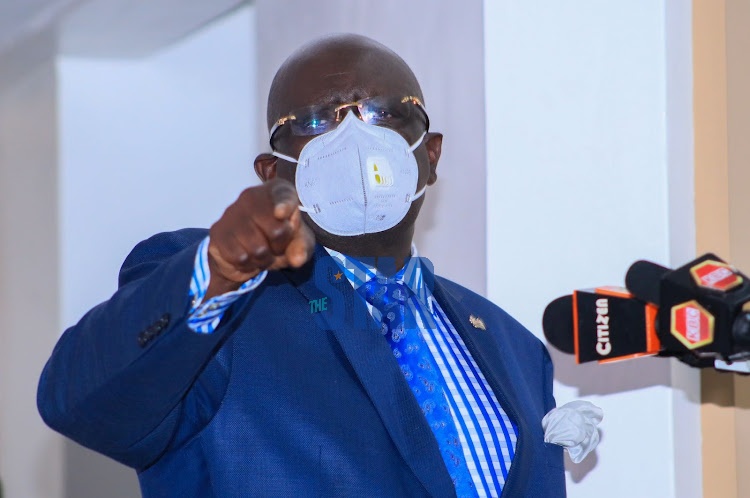 Education CS George Magoha speaks during the release of the placement result of students joining universities and colleges on August 17, 2021 at KICD, Nairobi.
Image: WILFRED NYANGARESI

The government has accounted for all students in its bid to ensure 100 per cent transition to secondary schools, Education CS George Magoha has said, as he blamed parents' attitude and poverty for setbacks.

In a statement on Thursday, Magoha said 1,129,637 have been placed in Form one in public and private schools.

Some 2,658 have registered to resit the 2021 Kenya Certificate of Primary Education examination.

Magoha said 11,213 have joined TVET while 1,193 either moved away from their homes or are deceased.

“This data clearly shows that we have successfully achieved the spirit of the 100 per cent transition policy,” Magoha said.

Magoha said other counties are on the verge hitting the 100 per cent transition.

Magoha said parents' attitude and poverty were some of the challenges the ministry encountered.

“The attitude of some parents towards sending their children to Form One was uninspiring,” Magoha said.

He said the government had done everything to support learners in secondary schools despite challenges of inadequate infrastructure in some schools.

“I wish to urge parents, guardians and teachers to co-operate with the National and County Government officials to devise strategies of raising transition rates in the affected counties,” he said.

Over the period of the exercise, Magoha said he came face to face with poverty.

“This was as I visited homes to find candidates who had given up hope of joining Form One,” he said.

However, he noted that 50 poor children are now in schools of their choice after a scholarship was offered to them.

“I appeal to the private sector to partner with the government in providing scholarships to needy and vulnerable children in the country,” he said.

“I urge principals to treat all cases of school fees defaulters with a human face. Households are facing serious challenges during the Covid-19 period and hence the need to invest in tactful management of school debts to avoid sending away learners from schools due to fees arrears.”

Magoha urged parents who are financially stable to clear their fees to enable schools to run optimally.

Parents risk arrest for failing to enrol children in Form 1