Landownership at the centre of Laikipia violence 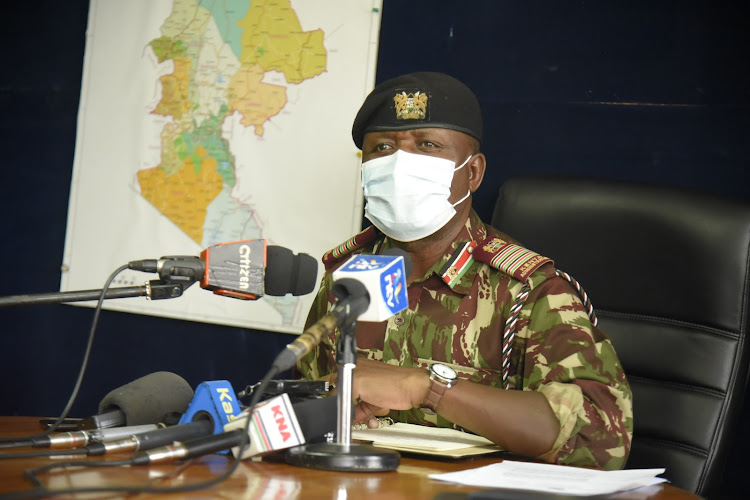 The ongoing violence in Laikipia is instigated by politicians and other powerful people in the community, Rift Valley regional commissioner George Natembeya has said.

He said the conflict is part of a bigger plan of creating insecurity and evicting legal landowners from the area.

Natembeya said the involved communities had been duped that the evictions would expand their territories while the biggest beneficiaries would be several individuals.

Ndiwa added that the operation is still going on and they are facing a lot of resistance from the armed herders who have been incited to violence and not to leave Laikipia.

He said the fighting that has claimed eight lives over the past one month, among them three police officers, was about landownership, contrary to the common belief that the communities were fighting over water and pasture.

And speaking in Nakuru, Natembeya said six people, including two police officers, had been injured over the past two months with 22 families were left destitute after their homes were torched.

Addressing the media at his office in Nakuru on Wednesday, he described the situation as a well-coordinated conflict by some unnamed leaders who were interested in taking over the land once the owners leave the area and establishing ranches.

“There are some people who are obsessed with ranching and they are targeting Laikipia Nature Conservancy to displace the owners and take up the ranch,” he said.

Natembeya said it was an open secret that the cattle driven into the conservancy belonged to rich people who hold big positions in society and even government.

“The livestock that is being grazed in the conservancy and surrounding ranches does not belong to the armed herders. It belongs to very rich people who are keeping them well-fed and sufficiently supplied with guns and ammunition,” he said.

He said although the suspected leaders denied culpability when they were summoned, the move had an impact because animals were being driven out of the conservancy towards Samburu, Isiolo and Baringo.

He said it was wrong for an individual to rare more animals than their farms can hold and then forcefully graze them in other people's land.

He said the government would ensure that all the animals and the criminals hiding in the conservancy are ejected, never to return.

“There are other vast pieces of land, conservancies and ranches in Nagum area where landowners were evicted in 2013 and they have never returned. There is a conspiracy by communities who have been fighting previously to gang up and take over private land,” he said.

The regional administrator said the government was fighting with the people behind the bandits and morans who wanted to push people out of their land.

“The experience we have had before is that when the invaders are leaving the conservancy, they come out with so much aggression and they harass the communities surrounding the ranches, burning their homes, stealing their livestock and killing people,” he said.

He said security had been beefed up in Ol-Moran, including increasing the number of National Police Reservists to protect the vulnerable communities and their property.

Natembeya, who was flanked by senior police officers in the region from different units, suggested banning moranism, saying the custom was being used to cause conflicts.

“What purpose does moranism culture serve currently? It was being used for inter-community fights in ancient times and the youths were taught that their neighbours were their enemies. It is a culture that cannot be continued,” he said.

He added that leaders were exploiting the morans, inciting them against neighbouring communities and making them fight for their (leaders') selfish gains.

“The government knows the people behind this chaos and the only challenge is, there is no sufficient evidence. The police and the Directorate of Criminal Investigations are compiling concrete evidence against the perpetrators after which appropriate action will be taken, regardless of their social or political status,” he said.

He said calm had been restored since Tuesday evening when the government through Interior Ministry started a mild security operation in the area.

“The government is aware that there are plans to remove the aminals from Laikipia Nature Conservancy and bring more than 500 morans to fight, and I am warning them that the state will not tolerate this,” he said.

Natembeya said police were looking for the leaders in relation to the conflict, among them Tiaty MP Kamket and former Laikipia North MP, Lempurkel who had since been arrested.

He warned politicians to stay away from Laikipia because it has been declared a security operation area. He said the only people wanted there were the residents being protected and the security officers.