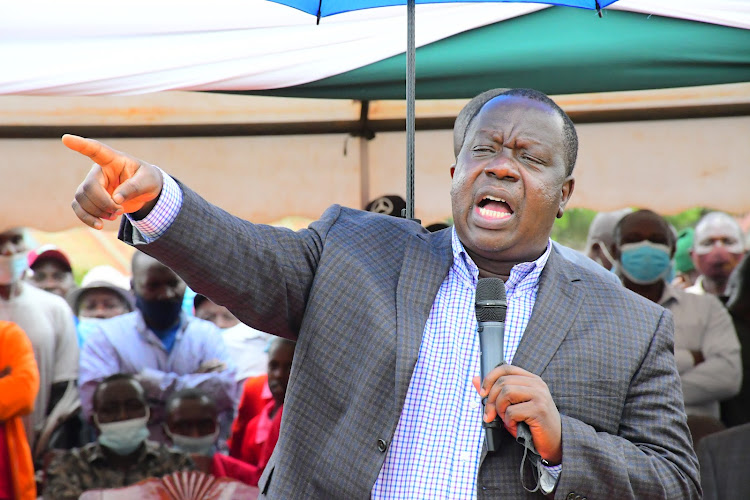 The government will resettle all the victims of banditry attacks in Laikipia county even as it apprehends criminal gangs and politicians said to be inciting residents to violence.

Interior CS Fred Matiang’i on Wednesday said the government was dealing firmly with the criminal elements who were terrorising residents of the Olmoran area in Laikipia and other parts of North Rift.

Addressing the public at Ekerenyo grounds after laying the foundation stone for the construction of Ekerenyo Subcounty Hospital maternity block, Matiang’i said already, security on the ground had been contained and security officers had taken full control of the situation.

He, however, said there were some people being targeted by law enforcers for what he termed punitive action.

“We will crush them. It is only a matter of days and you will see how we will deal with them. These elements who were out to spoil the prevailing peace and stability in the region will not have space in our country anymore,” the CS said.

He also cautioned politicians against inciting communities against each other in the name of election campaigns, saying as a security team, they will not give room for that to happen.

The CS told those involved in banditry to either surrender or face the law.

“We are sorry that our people were terrified and scared out of their homes and others injured. But we want to assure everyone affected that we shall resettle them all and offer the necessary support as they recover from the trauma they have been through,” the CS said.

He noted that Kenyans had their democratic rights of buying land anywhere and settling anywhere without being harassed and intimidated in any way.

The leaders raised concerns that members of the Gusii community had become a target of insecurity every time elections near and petitioned the CS and Inspector General of Police Hillary Mutyambai to guarantee the security of those living outside the community whom they said are vulnerable in the hands of hostile neighbours.

Ogeto told the inciters and bandits that the government is prepared to deal with them if they will not retreat from destroying the country’s prevailing unity and peace.

Arati asked leaders across the divide to support Matiang’i in dealing with banditry.

West Mugirango MP hopeful Steve Mogaka urged the government to deal with banditry in Laikipia once and for all to ensure residents don't live in fear fear of attacks.

“There is no way we can have Kenyans living in fear in their own country. The government has the capacity to deal with such,” Mogaka said in a phone interview.

Post a comment
WATCH: The latest videos from the Star
by ALVIN RATEMO Correspondent, Nyamira
News
08 September 2021 - 23:00
Read The E-Paper