Only 17.4 per cent of infants were circumcised, far less than the anticipated target of 40 per cent.

• Compared to the circumcision of adult and adolescent men, infant circumcision is less expensive, advocates say.

• The researchers said many mothers were probably sceptical about their babies being circumcised because this is not a cultural tradition in the region. 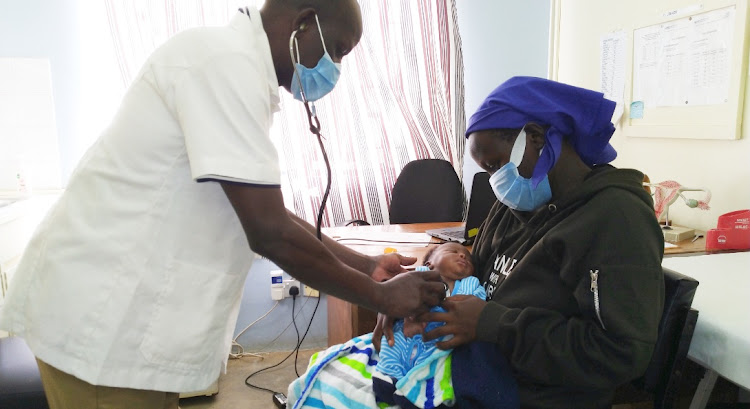 A medic examines a baby before circumcision in a health facility in Nyanza.
Image: COURTESY/UIC

Kenya has missed an important target to circumcise nearly half of all male babies who came into contact with facilities providing such services within 60 days after birth.

The target was set in 2014 in a pilot project in Migori, Homa Bay, Kisumu and Siaya counties.

If successful, the exercise would have been rolled out countrywide.

An analysis of data shows only 17.4 per cent of infants were circumcised, far less than the anticipated target of 40 per cent.

“The number of male infants offered early infant male circumcision (EIMC) represents between 7.9–19.1 per cent of total male infants born at the health facilities in this region,” the researchers from the school of medicine from Moi University and University of Nairobi say.

“This figure is still very low when compared to the set national target of offering EIMC to at least 40 of all male infant hospital deliveries.”

The researchers said many mothers were probably sceptical about their babies being circumcised because it is not the cultural tradition in the region.

“Hence changing their attitudes and behaviour towards the practice has to take time,” they said.

The analysis, “Uptake and outcomes of early infant male circumcision services in four counties in Western Kenya,” is published in the African Health Science journal.

“Fear of complications has also been cited in many studies as among the reasons why most mothers do not circumcise their sons at infancy,” the researchers said.

They are Kenneth Okwaro of Moi University, and Onesmus Gachuno and Theresa Odero of UoN.

The analysis, however, shows infant male circumcision is safe with average adverse event rates being 0.3 per cent, way below the expected cut-off of two per cent.

Male circumcision was introduced as a component of Kenya’s HIV prevention programme in in 2008 after three trials demonstrated that it reduces the risk of HIV acquisition by about 60 per cent.

To make it sustainable, the Unicef and the World Health Organization endorsed circumcision of babies, which prompted Kenya to launch a five-year pilot in 2014.

The researchers said the rollout was haphazard and no county started on time because of inadequate funds.

This led led to delays in certifying facilities offering the cut, as well as delays in training staffs.

Compared to the circumcision of adult and adolescent men, infant circumcision is less expensive, advocates say.

Health benefits for infants include a reduced risk of urinary tract infections during the first year of life.

Post a comment
WATCH: The latest videos from the Star
by JOHN MUCHANGI Science Editor
News
07 September 2021 - 06:25
Read The E-Paper