Cricket meals could be superior to chicken and beef, tests show

They are cheap and easy to rear, are acceptable in Kenya and are highly nutritious.

•The profile shows the crude protein content of both cricket species are similar and comparable to those of animal protein sources.

•Crickets can be fried and eaten whole but they are best ground into flour to make dishes such as Ugali, uji or Chapati, researchers said. 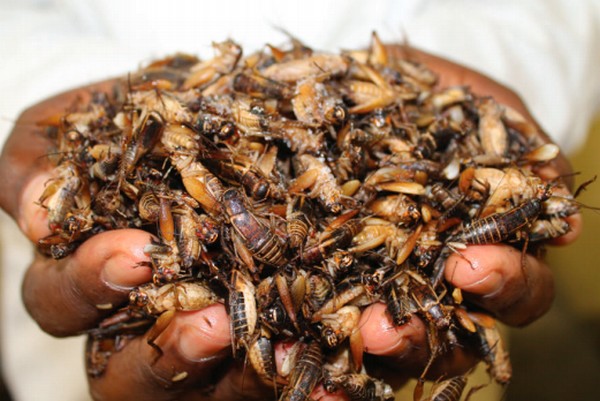 MEALY: The profile shows the crude protein contents of both cricket species are similar and comparable to those of animal protein sources.
Image: FAO

Kenyan researchers have analysed the nutritional benefits of edible crickets, placing the insects above chicken and beef in many aspects.

Crickets can be fried and eaten whole but they are best ground to fortify flour and make dishes such as ugali, uji or chapati.

The researchers analysed the nutritional composition of two cricket species found in Kenya (Scapsipedus icipe and Gryllus bimaculatus) and compared them with key animal and plant sources.

The profile shows the crude protein content of both cricket species are similar and comparable to those of animal protein sources.

“The protein digestibility of S. icipe and G. bimaculatus ranged between 80 and 88 per cent, which is comparable to that of common plant foods but slightly lower than that of animal proteins,” they say.

The iron, zinc and potassium contents were considerably higher in both cricket species compared to that of plant and animal sources.

In terms of global public health significance iron, zinc and vitamins are the most important micronutrients, which play key roles in preventing malnutrition and early stunting.

"The calcium contents of both crickets was superior to that of plant and animal origin except for kidney beans and eggs, respectively," they said.

Their study, "From Farm to Fork: Crickets as Alternative Source of Protein, Minerals, and Vitamins," was published last month in the Nutritional Epidemiology journal.

The researchers suggested cricket consumption offers immediate nutritional solution for Kenya, where one in four children under five years, or two million children, are stunted.

“So far, little attention has been paid to crickets as source of essential nutrients in human diets,” they said.

Stunting is mostly caused by poor diet and has devastating long-term effects, including diminished mental capacity.

The researchers collected adult crickets from subsistence and commercial farms in Western Kenya. The samples were blended into a paste using a kitchen blender  and subjected to various chemical analysis.

The tests also showed they can contribute up to 100 per cent of the recommended dietary allowance of iron for women of reproductive age and children below five years.

Globally, iron deficiency is the commonest nutritional disorder affecting both children and women of reproductive age.

“It is thus, evident that integrating edible crickets into the regular diets of women and children might have the potential to address the anaemia problem,” the researchers said.

Recent studies show that acceptability of common foods fortified with edible insects in Kenya is high.

The researchers are from  the Kasarani-based International Centre of Insect Physiology and Ecology (Icipe), Jomo Kenyatta University of Agriculture and Technology, University of Kabianga, and Uganda’s Makerere University.

Crickets have featured in human diets around the world for many decades with their consumption widely practiced in parts of Africa, Asia, and Latin America.

According to the United Nations, the global market for edible insects could be worth $6.3 billion by 2030.

Jkuat is one of the leading proponents of cricket farming in Kenya.

Post a comment
WATCH: The latest videos from the Star
by JOHN MUCHANGI Science Editor
News
06 September 2021 - 05:00
Read The E-Paper