How the state plans to puncture Ruto's hustler narrative

Deputy President accused of exploiting vulnerabilities of the poor as part of his scheme to rise to power. 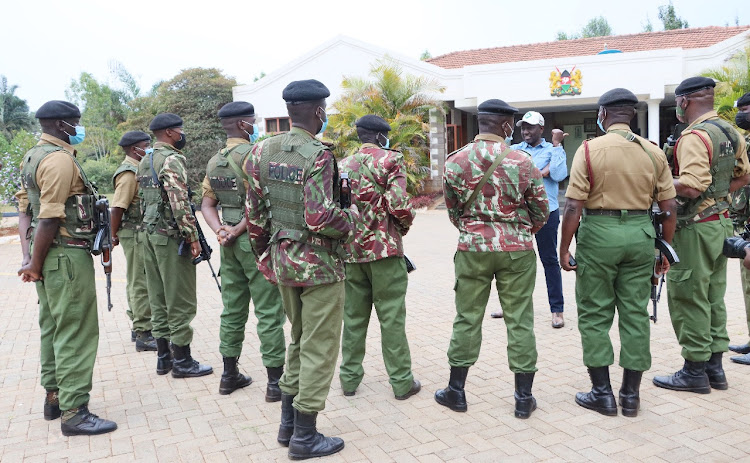 DP William Ruto having a brief talk with the team.
Image: DPPS

The government could have kickstarted an aggressive strategy to puncture Deputy President William Ruto's hustler narrative and deflate his 2022 presidential bid.

The hustler narrative is a key component of Ruto's 2022 presidential campaigns through which he says he will dramatically turn around the fortunes of the poor masses who are currently toiling hard to eke a living.

Ruto has charged his 2022 campaigns on the platform of what he has called the bottom-up economic model as he seeks to turn the tables on his boss President Uhuru Kenyatta.

In what is seen as part of an elaborate scheme by Uhuru to clip the wings of his deputy, the government is going flat out to expose Ruto's massive wealth.

This is seen as a strategy to expose him as a fake 'hustler' handing out wheelbarrows to poor youths while wallowing in opulence.

It later emerged that the revelation could have been part of a well-calculated scheme by the state to deflate Ruto's hustler narrative.

“That was the tip of the iceberg,” declared National Assembly deputy Majority Whip Maoka Maore, a key Uhuru ally.

The Igembe North MP said the time has come for Kenyans to be told the truth about "this man" who is inciting Kenyans into a class war while pretending to be poor.

“For long, he has had a field day deceiving unsuspecting Kenyans, but it will no longer be business as usual because time has come for our people to stand up for the truth,” the MP said.

Matiang'i also revealed that Ruto was the country's second most protected VIP with in excess of 257 police officers. He said Ruto also has over 18,500 acres, two high-end hotels, five helicopters in two hangers at Nairobi’s Wilson Airport and a chicken farm—all guarded by the police on taxpayers' money.

There are claims that withdrawal of General Service Unit officers from the DP's Karen residence and the Sugoi home was a bait to rattle him before the elaborate exposure could kick in.

However, the state has denied any ill motive in the replacement of the dreaded GSU contingent with officers from the Government Buildings Unit, saying it was just "normal reorganisation”.

But Ruto's allies say the security fiasco was orchestrated by the state to get an opportunity to intimidate him and whip him into submission after radically rebelling against the establishment.

Wajir Woman Representative Fatuma Gedi, the vice chairperson of the National Assembly's Security committee, said the journey to unmask Ruto has started so that Kenyans can judge by themselves.

“There is no rationale in claiming that you are empowering Kenyans when it is clear you are dishing out handouts to hoodwink Kenyans and incite them into a class war,” she said.

The MP, a fierce critic of the DP, said the hustler narrative is deceptive rhetoric aimed at propelling Ruto to power by exploiting the vulnerabilities of the millions of poor Kenyans.

Political analysts say the move could send Ruto back to the drawing board to convince his followers that he is not riding on their poverty to get political power.

Already, Uhuru is working on a different 2022 succession path that brings together Ruto's rivals, with ODM boss Raila Odinga seen as his preferred successor.

The Tuesday disclosure, which lifted the lid off Ruto's multibillion-shilling empire, is seen as the first among other planned schemes to deflate and vanquish him ahead of next year's polls.

There is a wider plan allegedly by the state to turn the tide against Ruto by consistently debunking his hustler narrative and exposing underhand dealings by some of his allies.

There are claims that part of the reason the GSU officers were withdrawn was that some of them had been immersed in Ruto's personal errands and were being used for some fishy dealings against police standing orders.

There are also reports that the DP could have personally donated some of his guards to offer protection to his allies who had been denied state security owing to their criminal record.

Sensing trouble, Ruto on Wednesday, for the first time, moved to lay bare some of his investments.

Ruto said he rakes in Sh1.5 million from selling at least 150,000 eggs daily from his poultry farm with 200,000 chickens in Koitalel Eldoret.

“They forgot to disclose that my poultry business, which they listed in acreage, has 200,000 chickens and this man sells 150,000 eggs a day, making Sh1.5 million daily.”

He also said he has 400,000 Safaricom shares and another 8,000 shares at Kenya Airways, among other investments.

Opening up to his followers about his fortunes, he insisted that the hustler narrative was not about fanning class wars between the rich and the poor.

“You must not be poor to be a hustler and that the hustler narrative can never be a class fight between the rich and the poor,” the DP said on Wednesday at his Karen residence.

In a bid to address concerns that his rags-to-riches story might not add up, Ruto bravely, for the first time, declared he is wealthy, “yet I am a hustler”.

“William Ruto is not a poor man; he has wealth, yet he is a hustler. This means that you don’t need to be poor to be a hustler,” the DP told his supporters.

Uhuru and Raila have been urging the youth to ignore the culture of handouts advanced by Ruto, maintaining that the DP wants to ride on poverty to the presidency.

He has constantly tried to have it both ways and to some degree, he has succeeded
Siasa
9 months ago

Mugonyi says several listed properties don't belong to the DP, that he was willing to undergo audit.
News
9 months ago