The DP lays bare his Safaricom and Kenya Airways shares worth millions of shillings. 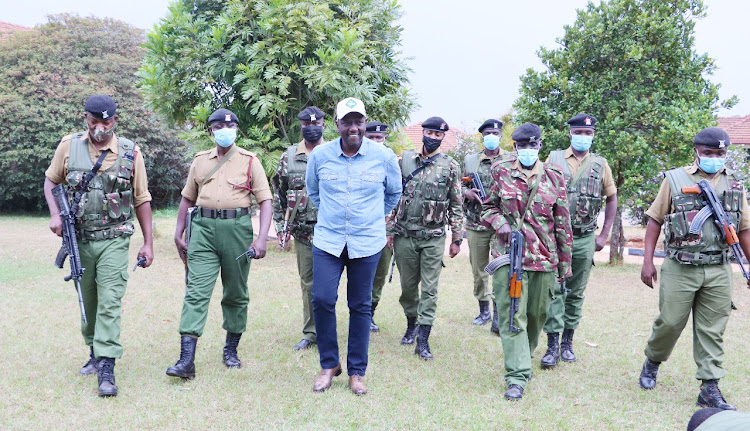 Deputy President William Ruto made a spirited fightback yesterday over allegations of whipping up a false hustler narrative, insisting he is a true son of the soil who has risen from grass to grace.

He, for the first time, publicly listed some of his sources of income,  revealing he makes Sh1.5 million a day from his Koitalel poultry farm. The farm is home to 200,000 chickens.

Going by Thursday’s market value of Safaricom shares at the Nairobi Stock Exchange, his shares are valued at Sh17.4 million.

“They forgot to disclose that my poultry business, which they listed in acreage, has 200,000 chickens and this man sells 150,000 eggs a day, making Sh1.5 million daily.”

The details came a day after a security fiasco over his guards saw the state lay bare some of the DP’s massive wealth during a National Assembly security committee meeting.

A presentation by Interior Cabinet Secretary Fred Matiang'i to the committee showed that Ruto has over 18,500 acres of real estate property, two high-end hotels, five helicopters in two hangers at Nairobi’s Wilson Airport and a chicken farm.

The Deputy President has come under sharp scrutiny from his opponents, including ODM leader Raila Odinga, over the source of his wealth, with critics saying he is a beneficiary of graft.

However, Ruto has previously been cagey about what he owns and often rebuff questions about his personal net worth during live TV interviews.

After the state’s disclosure about some of his wealth, the DP yesterday said a“lifestyle audit” should now follow suit on other leaders.

“They have tried to do that lifestyle audit for William Ruto and it is not bad but they should have continued to do the same for other people so that we settle this. What is the problem?,” Ruto posed.

The DP spoke when he addressed a delegation from Nakuru county at his Karen residence.

Some of the DP’s rivals, including Wiper leader Kalonzo Musyoka, have called for a thorough lifestyle audit, claiming he has ill-gotten wealth.

But the DP yesterday put a brave face, telling his opponents that the disclosure helped him conduct a free lifestyle audit on himself and settle long-standing questions about his wealth.

“These people from the OP (Office of the President) have done a lifestyle audit on me even without the law and have improved on what was done by the media,” Ruto said.

“Good enough, they have removed some of the assets like Six Eighty and Boulevard hotels because it was false that they belonged to me.... they have now added some, which I don’t own.”

The DP, however, revealed that he will be writing to “those people at the OP” demanding that some of the assets that do not belong to him be expunged from the records presented to Parliament.

"I am told that they spent two sleepless nights planning that lifestyle audit, but sometimes God denies sleep to those people who don’t like you so that they can work for you," Ruto said.

Ruto is walking a political tightrope to succeed President Uhuru Kenyatta next year after an acrimonious split.

Uhuru is working with Opposition leaders to cobble together an alliance to vanquish his deputy, but Ruto says he is being fought because of his poor background.

“They have helped us to debunk their claims that you must not be poor to be a hustler and that the hustler narrative can never be a class fight between the rich and the poor,” the DP said.

“In the process, they have also explained that this William Ruto is not a poor man and has wealth, yet he is a hustler. This means that you don’t need to be poor to be a hustler.”

The DP’s main rivals, among them Raila, have torn into his character, branding him a dangerous politician pursuing selfish political interests at all costs and asking Kenyans to reject his combative style of politics.

They have also accused Ruto of fanning a class war and dismissed as fake the hustler narrative aimed at hoodwinking Kenyans ahead of the 2022 polls.

Ruto said it was now clear that the security saga about his guards was orchestrated to open the can of worms for him in a desperate attempt to slow down his hustler politics.

“It was no longer about the security, the GSU or the AP but about executing a free lifestyle audit on William Ruto. I did not become Deputy President last week; I have been Deputy President for the last nine years. How come they forgot it was supposed to be AP and not GSU?” he said.

Last week, GSU officers guarding his Karen residence and other homes were replaced with the Government Buildings Unit from the Administration Police, triggering an uproar.

The two say the move is against the law and the Constitution.
News
3 months ago

Mugonyi says several listed properties don't belong to the DP, that he was willing to undergo audit.
News
3 months ago

CS will be held responsible if anything happens to the DP.
News
3 months ago
by JAMES MBAKA Senior Political Writer
News
03 September 2021 - 05:00