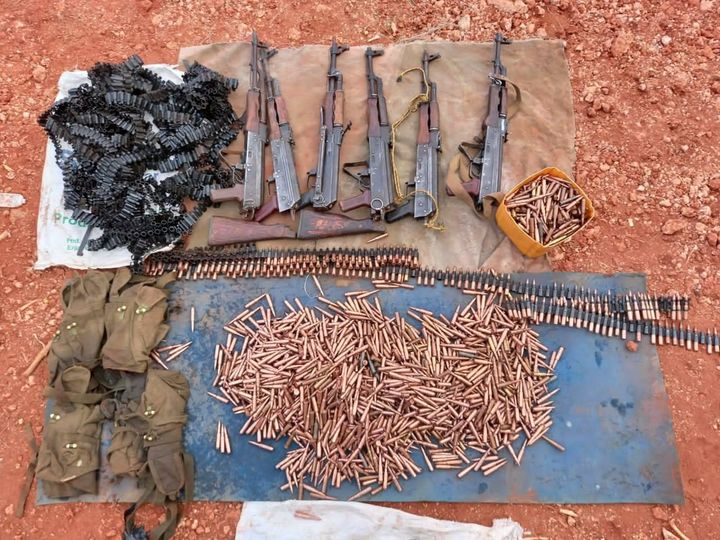 The assortment of weapons recovered from suspected al-shabaab terrorist on Sept 2 in Mandera
Image: NPS

A gunman believed to be a member of al Shabaab was shot dead in a clash with police in Kutulo, Mandera county, and five rifles recovered from him.

The incident happened on Thursday afternoon when a team of officers from the special operation group found gunmen in Kutaiyo area.

Police said members of the elite group were patrolling the area when they came across four gunmen who were riding on a motorcycle.

This prompted a shootout that led to the killing of one of the gunmen while the rest escaped on the motorcycle.

No police officer was injured in the incident that happened near the Kenya-Somalia border.

A search in the area for more suspects did not bear fruit.

He urged for cooperation from residents in efforts to address insecurity, which has among others affected transport, education and general development.

“We must work together to ensure we tame these activities which are hampering development. It is everyone's duty to ensure there is security,” Bunei said.

The area has been facing security challenges in the past months due to attacks by al Shabaab militants who cross from the Somalia border.

Tens of people have died, scores wounded and property destroyed in the repeated attacks.

The areas, which include Mandera, Wajir, Garissa and Lamu are near the Kenya-Somalia border, which makes it easier for the militants to attack at will.

From a local context, KDF have done a commendable job of neutralizing external security threats.
Opinion
1 month ago

The attacks had in June 2021 grounded operations in the neighbouring Mandera county as most roads were rendered impassable.

The rich used air travel as the poor remained stranded.

Security agencies have not been spared in the attacks.

In June, the Mandera county government was forced to stop movement of their vehicles, over increasing terror related incidents in the area.

The area of attack in the northern part of the county, has been a safe area since 2013 but has lately been a soft target.

Police have been mounting operations.

The terrorists have been targeting security installations in the area in a series of incidents and destroying them.

This has affected among others the education sector, forcing tens of teachers who are non-locals to flee.

The terrorists conduct attacks after breaching security zones, which leave dozens of civilians and security officials dead or wounded.