They are descendants or children of pioneer Asians who came to the country during the British colonial rule. 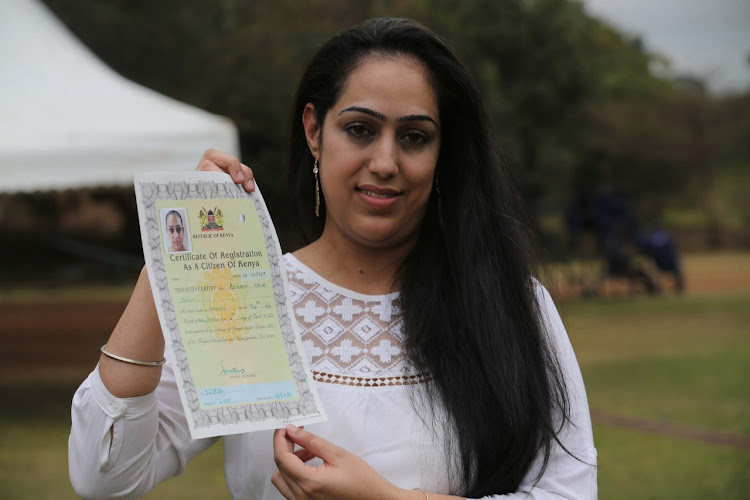 Some 52 stateless Asians living in the country without legal status can now live freely after the government granted them Kenyan citizenship on Thursday.

They are descendants or children of pioneer Asians who came to the country during the British colonial rule but opted to take British citizenship while staying in Kenya.

The British law forbade their children from becoming citizens of the colonial master.

This means that though born and bred in Kenya, they were not eligible to be registered as Kenyan citizens and be issued with documents like Identity cards and passports. They remained stateless.

Some like Avil Jutely, 31, have had to endure the statelessness and were barred from opening bank accounts, getting licensed to drive and owning their telephone line with which to open a mobile money account.

“I have a phone line but registered in the name of my father who passed on three years ago. But I cannot have a driving licence, KRA tax PIN and any other document or privileges that accompany citizenship,” she told the Star.

She is a Nakuru resident. Her father was a Kenyan resident of Asian descent but a British citizen who acquired Kenyan citizenship later in life. Her mother is Indian.

But all these frustrations ended on Thursday when the director general of immigration, Alexander Muteshi, granted her and 51 others certificates of citizenship. The function was conducted at Karura forest.

Muteshi said the government was committed to ending the problem of statelessness, citing a presidential directive in 2016 that saw 15,000 people from the Makonde community, the Shona community and Ghana accorded full citizenship.

Muteshi also revealed that as part of the directive, his office had received a letter from the UNHCR requesting that the government grant citizenship to stateless people who had come to the country even from neighbouring countries. The letter had been forwarded to the Interior CS Fred Matiang’i for consideration.

“Statelessness is a major human rights issue,” he said, adding that, “once you are stateless, you are unable to engage in any economic activity.”

“It is also very difficult for your family to just access basic services.”

The immigration boss also assured the community that the state will expedite their process of obtaining ID cards and passports to enable them to fully exploit their rights and opportunities as citizens.

Sahib Singh Khosla, who led the four-year process that saw the 52 get status, said the award of citizenship was a major boost to the socio-economic status of the community as they will now stop operating in the shadows.

“I was personally affected. I'm Kenyan but my wife-to-be was stateless. Stateless people have no documents, so you can’t go to any government office and do any process, including marrying; it’s a serious issue of human rights. I'm so happy that finally, I’ll be able to marry her,” Khosla said.

“Some of them have not been able to legally work and this opened doors for unscrupulous employers to take advantage of them as they had no protection under the law. All that is past now.”

Post a comment
WATCH: The latest videos from the Star
by GORDON OSEN AND FAITH CHEBET
News
02 September 2021 - 23:00
Read The E-Paper