Muturi has been charting his own political path away from the succession schemes hatched at State House. 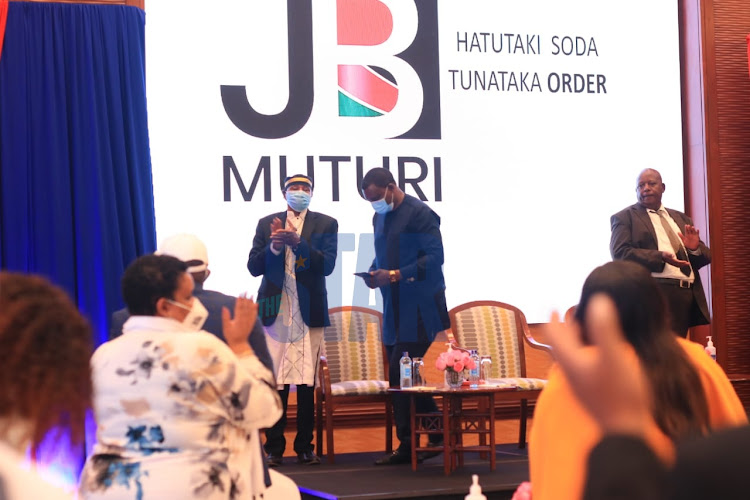 President Uhuru Kenyatta has moved to secure the Mt Kenya vote bloc in a bid to manage his succession.

President Kenyatta, who has been engaging in talks with opposition leaders to fashion a formidable formula against his deputy William Ruto, last weekend held a closed-door meeting with Meru leaders to align them behind his plan.

Impeccable sources confirmed that the objective of the meeting was to craft a plan to rein in National Assembly Speaker Justin Muturi, who has announced his bid for the presidency next year.

Others at the meeting were Lapsset  Transport Corridor chairman Titus Ibui and Industrialisation PS Peter Kaberia.

Muturi, who was in May crowned Mt Kenya spokesman by the elders of the Ameru, Embu and Kikuyu communities in quick succession, has been charting his own political path away from the succession schemes hatched at State House.

His moves are said to have irked the power brokers scheming the 2022 presidential race aimed at bulldozing political bigwigs to back ODM leader Raila Odinga.

During the meeting, Ameru's top leaders were whipped to withdraw their support for Muturi to slow him down.

Muturi has anchored his bid on support from Mt Kenya East, which comprises Meru, Embu, Tharaka Nithi and to some extent Kirinyaga — which was hived off Embu.

The region's leaders feel it is their turn to provide the next leader of the Mt Kenya region, which has been the preserve of the West — comprising largely the Kikuyu — since Independence.

Muturi, who was initially perceived as angling to be Ruto's running mate, has made inroads in the three counties where the deputy president enjoys support.

The Speaker has made it clear he is not playing second fiddle to anyone and is going for the top seat.

His bid has been supported by governors Muthomi and Murungi.

With both governors and the Nchuri Ncheke leadership widely known to be pro-Muturi, the speakers at the meeting, including Maore, insisted on the need to review the community’s political stand.

Maore is Raila's point man in the region and has often flanked him in meetings in Karen and at Cotu Secretary General Francis Atwoli's Kajiiado home alongside former Gatanga MP Peter Kenneth.

Sources told the Star in confidence that Uhuru explicitly called on the leaders to rally support for Raila, who is yet to find an entry point into the region.

The leaders were, however, reluctant and reportedly told him that marketing his handshake partner in the region would be an uphill task.

The President, who chaired and moderated the session, insisted on the need for Murungi and CS Munya to end their political rivalry and work together for the sake of unity in the Meru region.

Sources in the meeting said Munya was asked by the President to consider relinquishing his ambition for the Meru gubernatorial seat in favour of the incumbent, Kiraitu, who unseated him.

"Munya answered in the affirmative, saying it would be subject to what he stood to gain in the next government should the axis that Uhuru will support win," said our source.

The President promised the group that he would convene a Sagana II summit to bring together Mt Kenya leaders to discuss unity under one umbrella ahead of the 2022 general election.

The Njuri Ncheke elders told the meeting that they and other councils of elders in the region had already anointed and settled on Muturi as the regional spokesman.

"He will also be our presidential candidate. It is not possible to try to introduce another candidate like Raila," a source from the meeting said.

Muturi has been missing in meetings convened by Uhuru in Mombasa.

Questions were also raised about the lack of representation from the meetings ostensibly convened to discuss the political future of the country.

On Sunday, Muturi told a church congregation in Kirinyaga that he was going all the way to the ballot and asked for their support.

On Thursday, he held a breakfast for over 100 opinion leaders and political operatives from Nairobi where he spelt out his vision for the country and said all the other applicants have been around too long and should leave the stage for new leaders to see the country.

He has lately been meeting other national political leaders in what is seen as a strategic move to build an alliance. A fortnight ago, for instance, he met with former Unctad secretary-general and presidential aspirant  Mukhisa Kituyi, Makueni Governor Kivutha Kibwana and Narc Kenya leader Martha Karua.

Sources said the subtle pressure being applied on the two governors and the push for Munya and Kiraitu to work together is designed to isolate Muturi and force him to drop his bid.

But sources close to Muturi, however, indicated the Speaker will pursue his bid to the end.

They claimed the two governors, Ibui and their associates are being intimidated with the threat of possible prosecution for being adversely mentioned in Kemsa and other procurement deals.

At the State House meeting, the Meru leaders were tasked to consider organising political engagements and rallies that can showcase alternative political leanings away from the Mt Kenya East narrative.

Most of the leaders who spoke to the Star remained non-committal on the task, insisting that Muturi has a right to seek the presidency like any other Kenyan.

According to political observers from the region, the emergence of Muturi and as a Mt Kenya kingpin has not been received well in some circles at State House.

“It is not something to take lightly as it feeds into the psyche of a restless community that is keen to pick the baton,” said one commentator who sought anonymity.

The source pointed out that a failure to involve Mt Kenya leaders in critical political engagements, including the recent Mombasa meetings was a signal of things to come.

Says leaders should not quarrel and insult each other in public, as this sets a bad example.
Counties
1 month ago

Muturi has said he will run for the country's top seat.
News
1 month ago

Speaker pledges his administration will be defined by order, discipline, and integrity if elected
News
1 month ago
by STAR REPORTER The Star
News
31 August 2021 - 07:05