They said the best option to prevent and protect the donkey population from sharp decline and loss of socio-economic livelihoods of donkey-dependent communities is to ban donkey slaughter.

•In 1999, the Government of Kenya through the Legal Notice 146 (Declaration of Animals) declared donkeys as animals to be used as food animals. 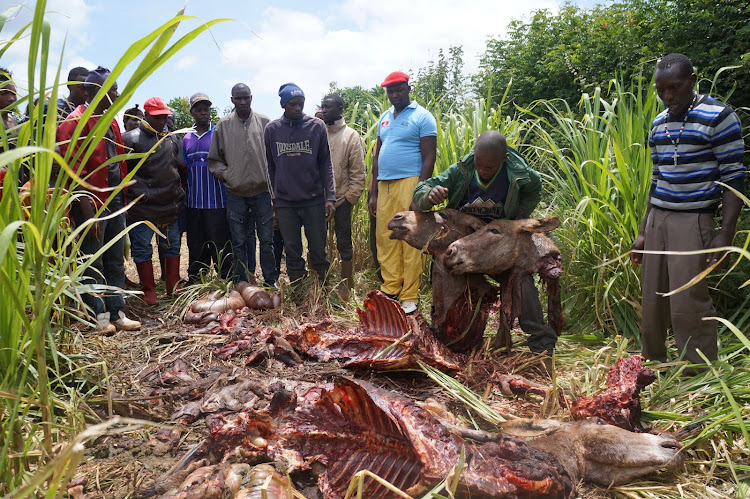 Representatives from 28 Counties on Thursday presented the petition to Agriculture CS Peter Munya.

Munya was however not in his office and the petition was received by his secretary before it was deposited at the legal department.

Joseph Thendu said the rate at which beasts of burden were being stolen, slaughtered, and skinned and their carcasses left in the bush was alarming.

“We want the Cabinet Secretary to issue a gazette notice removing donkeys from a list of declared animals for slaughter,” he said.

Efforts to reach Munya on his phone on the way forward did not succeed as he neither picked our calls nor replied to our text messages.

In 1999, the Government of Kenya through the Legal Notice 146 (Declaration of Animals) declared donkeys as animals to be used as food animals.

The move led to an increase in the number of slaughterhouses.

A total of four commercial slaughterhouses were licensed between 2016 and 2018.

The start of the commercial slaughter of donkeys in 2016 saw a decline in their population with the government reporting a decline from 1,965,632 donkeys to 1,176,374 donkeys.

According to Kenya Agricultural and Livestock Research Organization, the four abattoirs were slaughtering approximately 1000 donkeys per day causing the decline in the donkey population.

A total of 301,977 donkeys, which represented 15 percent of the donkey population were slaughtered in four export slaughterhouses within the period April 2016 – December 2018.

In 2020, the government instituted a ban on donkey slaughter.

The high court has since reversed the move.

Thendu said the CS should go ahead and order a ban on commercial slaughter of donkeys for meat, skin, and or any other purposes.

The Chinese claim the Ejiao has wide-ranging health benefits, including anti-aging properties, an increase in libido, and a reduction of reproductive organ diseases in women.

Donkey owners now want the CS to also issue a ban on cross border trade of donkeys between Kenya and any other country to curb the spread of diseases associated with donkeys and which can be transmitted to humans.

They also said the CS should invoke the precautionary principle for the preservation of donkey species for the sake of posterity.

Thendu reiterated that donkeys remain a critical livelihood support livestock at such times of Covid-19, economic hardships, and calamities such as drought.

He said the petition is accompanied by over 30,000 signatures from 28 Counties and resolutions from public and stakeholders’ consultations forums that were held in 26 Counties.

“It is evident that commercialized slaughter of donkeys in Kenya has led to increased donkey theft; loss of donkeys supported livelihoods, poaching and bush slaughter,” he said.

He said abattoirs have engaged in inhumane practices such as the slaughter of pregnant donkeys and foals.

Thendu said the best option to prevent and protect the donkey population from sharp decline and loss of socio-economic livelihoods of donkey-dependent communities is to ban donkey slaughter.

He said the donkey skin trade is not sustainable and is a real threat to donkeys and communities who own them.

Thendu said there is no known science or technology to fast track reproduction of donkeys in the world.