• 16 patients have succumbed to the disease, pushing the cumulative fatalities to 4,710.

• 159 patients are in the Intensive Care Unit, 116 of whom are on ventilatory support and 32 on supplemental oxygen. 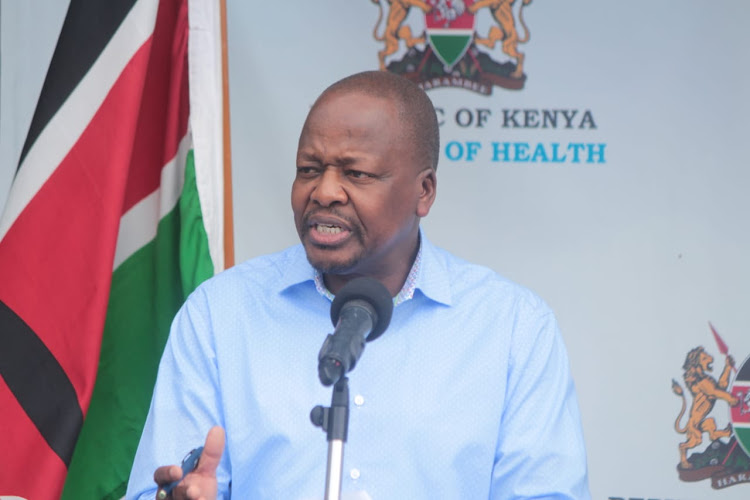 Health CS Mutahi Kagwe during a media briefing on coronavirus at Afya House in Nairobi on April 4, 2020.
Image: EZEKIEL AMING'A

Kenya on Sunday recorded 363 new cases of the coronavirus from a sample size of 4,594 tested in the last 24 hours, with the positivity rate at 7.9%.

Health CS Mutahi Kagwe said in a statement said that from the cases, 359 are Kenyans while four are foreigners, with 193 patients being males while 170 are males.

The youngest is a two-year-old child while the oldest is 97 years.

This brings the total confirmed positive cases in the country to 234,952, and the cumulative tests so far conducted to 2,363,524.

Kagwe said that 1,247 patients have recovered from the disease with 1,114 from the home-based isolation and care programme while 133 are from various health facilities countrywide.

Total recoveries now stand at 220,953 of whom 178,849 are from the home-based isolation and care programme, while 42,104 are from various health facilities countrywide.

Also, 16 patients have succumbed to the disease, all of them being late deaths reported after conducting facility record audits on diverse dates in August 2021.

This pushes the cumulative fatalities to 4,710.

A total of 1,967 patients are currently admitted to various health facilities countrywide, while 6,959 are under the home-based isolation and care program.

He added that 159 patients are in the Intensive Care Unit, 116 of whom are on ventilatory support and 32 on supplemental oxygen.

11 patients are under observation.

Another 813 patients are separately on supplemental oxygen with 727 of them in general wards and 86 in High Dependency Units (HDU).

The uptake of the second dose among those who received their first dose is at 41.4% with the majority being males at 55% while females are at45%.

Proportion of adults fully vaccinated is 2.95%.