New radical plan for President to hire and fire DP

•National Assembly Speaker Justin Muturi told the Star that he was yet to receive the said letters. 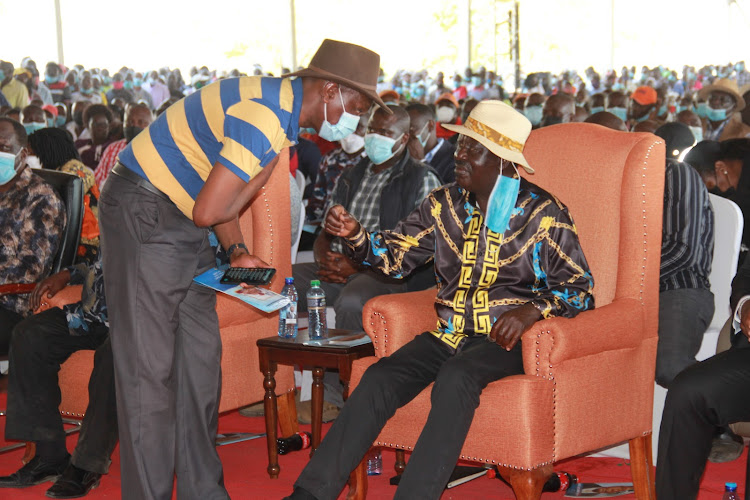 A new push to amend the Constitution has gained momentum in Parliament, with new radical proposals to give the President sweeping powers to hire and fire his deputy.

The Constitutional Implementation Oversight Committee has written to National Assembly Speaker Justin Muturi informing him of its intention to introduce the bill, which would also allow the President to nominate two deputies.

The details emerged at a time when President Uhuru Kenyatta’s relationship and his deputy, William Ruto, has hit rock bottom, with the two openly squabbling.

CIOC chairman Jeremiah Kioni, a close ally of President Kenyatta, also proposes the establishment of the position of prime minister and two deputies —similar proposals in the BBI report that was scuttled in the Court of Appeal  on August 20.

“The rationale of the amendments is to ensure stability in government by ensuring the deputy president supports the agenda of the President and realise the national values and principles of governance,” Kioni states.

It remains unclear if the initiative has the blessings of the Executive.

However, Kioni told the Star that there was a chance to vote for the proposals alongside the 2022 polls.

“We can have an extra ballot come elections time. We need to do this without seeing it as benefiting Raila Odinga, William Ruto or President Kenyatta. Let us look at it as a solution to our problems as Kenyans,” the lawmaker said.

In the letter, Kioni also says his committee also intends to introduce a bill to create additional 70 constituencies.

“The purpose of this letter is to seek your approval and to request for assistance in the preparation of the necessary bill,” the Ndaragwa MP said in a letter dated Thursday.

The development comes  hot on the heels of bitter exchanges between Uhuru and Ruto, with the President for the first time daring the DP to resign instead of fighting the government from within.

"The honourable thing is that if you are not happy with it, step aside and allow those who want to move on to do so and take your agenda to the people," Uhuru said.

But Ruto fired back vowing he will not retreat or surrender.

On Thursday, Ruto’s bodyguards comprising of the dreaded GSU’s Recce squad were withdrawn and replaced by Administration Police officers.

In the current system, Uhuru cannot fire his deputy.

Muturi told the Star that he was yet to receive the said letters and would only make a decision once he is seized of the proposals.

“I was in the office the whole of Wednesday but none was brought to my attention, unless they were delivered this morning,” he said.

“Once the proposal reaches my desk, I will consider the constitutionality of the same to inform the decision that I will take on the said bills. If they meet the requirement, we will send them to the Legislative and Procedural department for further consideration.”

Even so, Kioni said that in case the changes cannot apply in 2022, Kenyans could vote on the same next August, but the same be implemented in 2027.

He said Kenya’s post-election crises can be sorted through the simple steps of expanding the top echelons so that presidential losers and their followers don’t feel left out should they fail to ascend to the presidency.

On whether he was alone in the quest or the position of other leaders, Kioni said, “The lawmaking journey in this House is a problem. It is upon the offices of Parliament to ensure these things are fast-tracked."

"As chairman, I will do my part. Let Parliament also do its part since we can’t all just be speaking at press conferences.”

Already, the National Assembly has in its Order Paper bills with proposals similar to those that were factored in the BBI.

One is a bill providing for parties to nominate to Parliament runners up in a presidential race.

MPs had also lined up a proposed law providing for the President to appoint part of his Cabinet and Attorney General from among MPs.

The bid to introduce BBI-like amendments in the august House has elicited varied reactions, with anti-BBI forces saying there was no room for such.

Even as Kioni pushes for the changes, the BBI secretariat co-chairpersons Junet Mohamed and Denis Waweru on Thursday revealed that they will support Attorney General Kihara Kariuki's appeal at the Supreme Court.

They said with the expanded jurisdiction of the apex court, there would be an opportunity for the judges to look at the appeal from a broader perspective that ensures the country's future stability.

"We are determined to ensure that some of the noble proposals in the BBI are not lost. And if they are lost, then it must be known that we did our best," Junet said.

The Court of Appeal ruled that the BBI bill was unconstitutional, illegal null and void.

He urged MPs to pass the clauses that do not require a referendum.
Counties
11 months ago
by MOSES ODHIAMBO Journalist and Political Writer
News
27 August 2021 - 07:00