Miano said youth constitute about 30% of the total staff complement in KenGen.

• It also seeks to trademark its logo, becoming the first public institution in Kenya to do so. 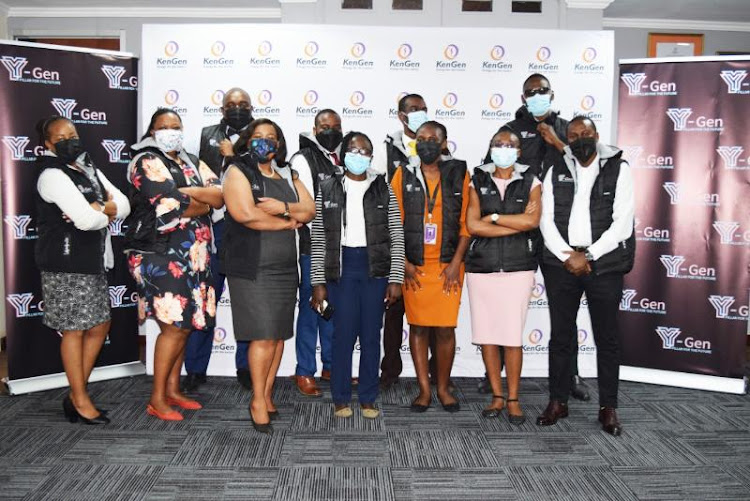 KenGen CEO and Managing Director Rebecca Miano, (3rd Left) poses for a photo with top managers and staff during the launch of the Y-Gen program.
Image: KenGen

Launched under the slogan ‘The Future is Now’, KenGen has now moved to register the Y-Gen Youth Empowerment Program with relevant government bodies.

It also seeks to trademark its logo, becoming the first public institution in Kenya to do so.

Speaking during the virtual launch ceremony, KenGen CEO and Managing Director, Rebecca Miano, said the youth constitute about 30% of the total staff complement in KenGen making them a key component in the delivery of the company’s growth strategy.

"As KenGen continues its journey into the rest of the continent under the diversification strategy, those within the Y-Gen bracket are truly the carriers and implementers of the company's global aspirations," Miano said.

She went on to state that KenGen was focused on delivering its long-term business strategy anchored on three pillars including value creation, lowering cost of electricity, and increasing generation capacity to boost and drive national development.

Miano said the youth will be a big part of delivering the robust strategy and therefore the need to have a forum dedicated to addressing the special needs of the young employees within KenGen.

The CEO went on to encourage young people to embrace good practices that will help them grow professionally and at a personal level.

She also warned against harmful practices like alcohol, drug, and substance abuse, indiscipline among others which she said would derail an employee’s progress at work.

Also speaking during the Launch was KenGen Board of Director Peris Mwangi who said that Y-Gen initiative will help young people grow professionally and realize their full potential.

During the launch, KenGen management unveiled four key pillars of the initiative that include Y-Gen Strategy Alignment, Y-Gen Brand Development and Outreach, Y-Gen Wellness and Y-Gen Pamoja that would inform the implementation of the forum’s strategy going forward.

As part of an alignment of the organization to Sustainable Development Goals (SDGs,) KenGen as a company has also mainstreamed other areas including gender through its Pink Energy Initiative.

The initiative earlier this year won a gender mainstreaming award issued by the Government of Kenya, through the Ministry of Public Service and Gender.

The Y- Gen launch comes at a time when the world on August 12, 2021, marked the International Youth Day that seeks to bring the youth to the forefront in championing development issues across the world.

KenGen ha received 550,981 carbon credits and is expected to earn Sh119 million from its sale.
Business
3 weeks ago