The office of the Inspector General says the changeover was normal.

• Officers from the APS' Security of Government Buildings Unit took over. 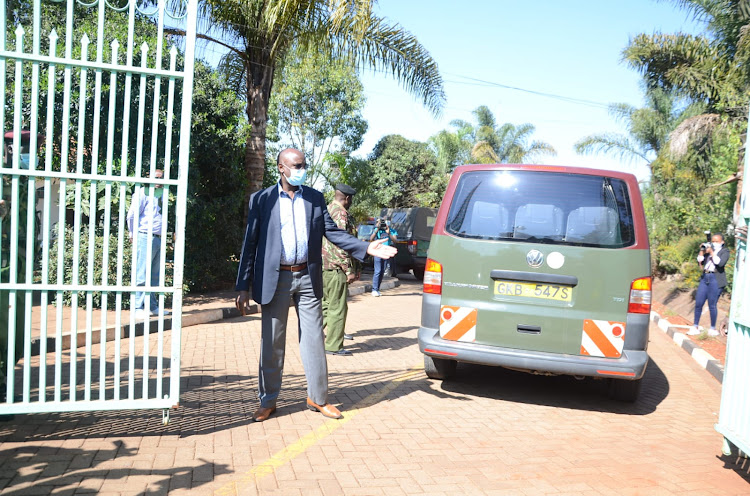 The GSU left Ruto's rural home in Sugoi, Eldoret town residence at Elgon View and his official Karen abode in Nairobi. Officers from the APS' Security of Government Buildings Unit took over.

The office of the Inspector General said Friday the changeover was normal, but Ruto's communication secretary David Mugonyi said the state was undermining the DP's safety.

“The Deputy Inspector General of APS is under instructions to ensure personnel from SGB take over protection of the premises. They are all police officers,” said an official who asked not to be named.

He said Ruto's bodyguards will remain GSU personnel of his choice.

The official explained the decision was taken because the DP's residence is not State House or lodges, which the GSU is mandated to guard.

The official added the DP has been moving with a team of GSU personnel to some rallies against an order on Covid-19 pandemic protocols.

It made it difficult for officers on the ground to effect the rules, the official said.

“It became difficult for them to, for example, disperse the crowds breaking the protocols after it emerged he is walking with the GSU personnel who are supposed to guard his houses.”

The new APS officers deployed to guard the houses took over in a seamless event amid uproar from Ruto’s supporters.

A team of administration police officers, numbering about 15, arrived at Karen at about 3.30pm and took over.

The officers were taken around the compound and given instructions by their team leader in the handing over ceremony. The same applied to some of his houses in the country.

Mugonyi said in a statement Ruto received verbal communication about the withdrawal of GSU officers effective 2pm on Thursday.

"At this stage, no explanation has been offered for this strange and unlawful decision," Mugonyi said.

He said the Office of Deputy President has written to the Inspector General seeking an explanation for the decision.

He recalled that in September last year, an armed police officer prevented the deputy president from holding a meeting in Kisii town.

“The Deputy President is elected to perform prescribed constitutional roles and duties and therefore this worrying pattern of wanton violations of the law and his constitutional rights and personal security is calculated to sabotage and undermine the office,” Mugonyi said.

Kikuyu MP Kimani Ichung'wa, an ally of the DP, visited Ruto's residence in the afternoon to ascertain the security changes at the home.

"We have heard that they are swapping the GSU with the AP officers. They want to bring people they can easily manipulate to get information from the DP," he stated.

He said it was unfortunate that the DP's security is being changed to settle political scores.

"Why are they bringing people who are not trained in VIP protection. If they don't have resources to protect the DP we will ask Kenyans to come out to protect Ruto themselves. We will not be at the mercy of a government that has no civility," he added.

He said police's various units are mandated to provide security to government buildings and critical infrastructure including security to VVIPs and their residences.

“This is normal re-assignment of duties within the National Police Service to enhance efficiency and effectiveness,” he said.

He added the Presidential Escort Unit will continue to provide close protection and security to the DP.

Post a comment
WATCH: The latest videos from the Star
by CYRUS OMBATI AND ALLAN KISIA
News
26 August 2021 - 23:00
Read The E-Paper