Wanjigi ready to face off with Raila at ODM primaries

Says notion that ODM’s presidential candidate could only be Raila was wrong. 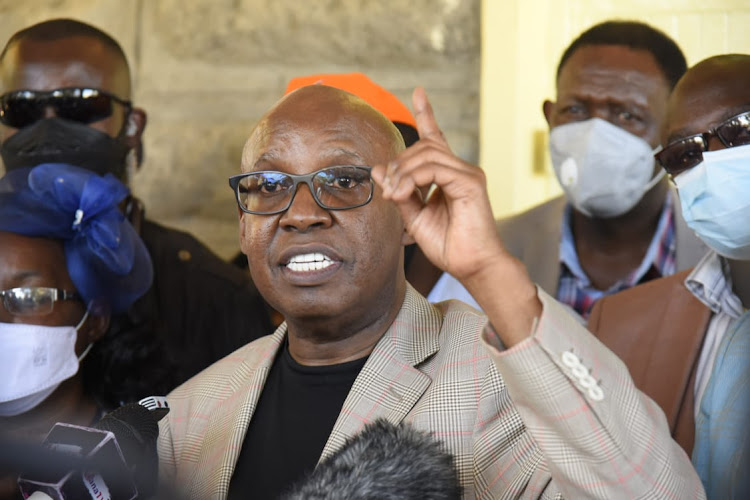 Presidential aspirant Jimmy Wanjigi is optimistic that he will beat his party leader, former Prime Minister, Raila Odinga at the primaries.

He said that he was ready to compete with Odinga for the Orange Democratic Movement (ODM) presidential ticket for the 2022 General Elections.

Speaking at Presbyterian Church of East Africa, Ndarugu in Nakuru Town West on Sunday, Wanjigi said the notion that ODM’s presidential candidate could only be Raila was wrong.

“ODM is a national party that was started by many people among them President Uhuru Kenyatta, Deputy President William Ruto and Wiper Party leader, Kalonzo Musyoka among others and not Odinga’s personal outfit,” he said.

The businessman said ODM would prove to citizens that it was the most democratic political party in its internal operations.

He said it was the role of the party’s national delegates to pick a presidential flagbearer adding that no one will impose themselves.

“Odinga is my good friend and I want to tell him now that I will beat at the nominations, it is time for a new crop of leaders,” he said.

Wanjigi added that the country was required a third liberation which could not be achieved by people he termed as recycled and tired leaders.

“Kenya had its first liberation for colonisation and those leaders had their times of 30 years, the second liberation started in 1992 and that too has taken another phase of 30 years and the people who led the nation for that period have nothing to offer,” he said.

The presidential aspirant who has visited Nakuru twice since he declared his interest in the top seat, said the country required an economic liberation.

“The country has faced a myriad of challenges among them impunity and corruption which have stagnated economic growth,” he added.

Wanjigi who was accompanied by Speaker of Nakuru County Assembly, Maina Kairu, said those who have created the above problems could not help solve them.