City Council was to decommission it in 2012, after almost eight years of planning

• A 2010 a survey showed Dandora dumpsite was over three times full. Garbage has been compacted but it's still overflowing.

• Nairobi county government accused of neglecting the dumpsite and turning it into a cash cow with cartels. 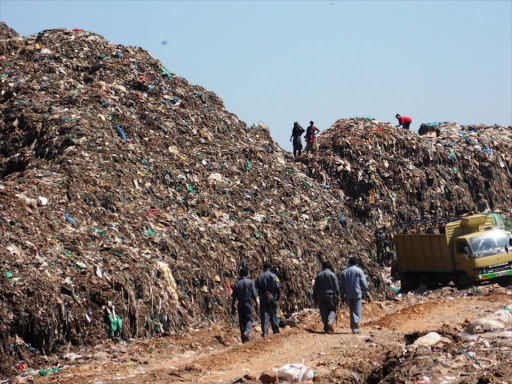 Closure, relocation and setting up an energy plant at Dandora dumpsite appear to be impossible, two county governments down the line.

Over the years, there have been plans and reported deals but nothing has materialised as garbage piles up and fires emit toxic fumes

Dandora dumpsite was officially opened in 1975 with World Bank funds and 26 years later in 2001 it was considered full.

At that time it held more than 1.8 million tonnes of solid waste against a 500,000-tonnes capacity but still serves as Nairobi’s main dumpsite today

However, the Environment and Land Court has ordered that Nairobi's main and legal dumpsite be closed and relocated away from Dandora by February next year.

Justice Kossy Bor on July 15 ordered the Nairobi Metropolitan Services to relocate the dumpsite and establish a new environmentally friendly dumpsite within the same period— by February next year.

After shutting it down, the court also ordered NMS director general Mohammed Badi to rehabilitate the dumpsite. He was also ordered to work the National Environment Management Authority (Nema) to put in place strategies to separate and recycle waste.

However, will a court order push NMS to deal with mountains of waste within six months after two county governments failed to solve the Dandora problem?

According to a July report by the National Environmental Complaints Committee (NECC), Kenya generates 22,000 tonnes of waste per day, including 2,400 tonnes in Nairobi county.

It all ends up at the Dandora dumpsite without anything being separated, plastic mixed with decomposing garbage.

The dump is also a  health hazard, leading to the increase of chronic diseases in the estates near the dumpsite. 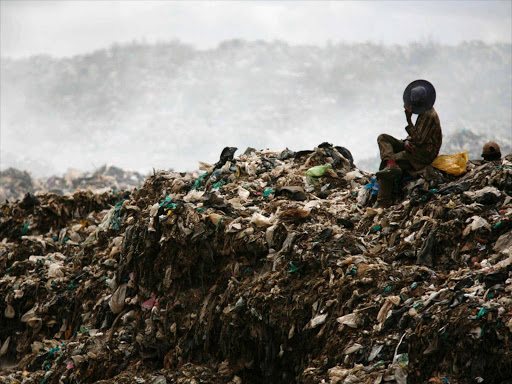 FILTHY: A boy sits on a pile of garbage at the Dandora dumpsite.
Image: FILE

The dumpsite is also said to be a multi-million shilling cash cow manned by cartels.

In January 2016, thugs had closed roads and blocked garbage collectors’ trucks from accessing the dumpsite until they paid levies.

They demanded an increase above the Sh400 paid by National Youth Service to community members in their programme.

Then environment executive Evans Ondieki said the county had partnered with NYS to ensure all accumulated garbage is cleared, however, it didn't happen.

Setting up a recycling and energy plant at Dandora dumpsite to solve the garbage pile up has remained a compelling idea long before devolution came along in 2013.

The City Council was to decommission the dumpsite in 2012, after almost eight years of planning.

However, conflict between the council and the Kenya Airports Authority over the relocation of the dumpsite to Ruai brought the process to a grinding halt

In November 2013, Nairobi’s first Governor, Evans Kidero, said his office was in talks with foreign investors to establish a new technology to clear the stench should the dumpsite be closed and relocated.

There were suggestion City Hall should relocate the dumpsite from Dandora to Ruai.

Ruai, however, is under the flight path of Jomo Kenyatta International Airport. No structures are allowed in case of emergency landings.

In August 2016, Kidero struck a deal with the German firm, EMC Solutions, to build a Sh28 billion electricity generation plant at the dumpsite.

It failed to materialise because at the time the city lacked a title deed for the dumpsite.

He also said birds would be attracted to the dumpsite, warning of bird strikes that could lead to fatal accident or major damage

Kidero’s successor, Mike Sonko, revived the plan in July 2018, saying the city was in the final stages of awarding the contract. It was never awarded.

The plant was to convert the waste into 160MW clean and renewable energy per day.

A month later, City Hall’s Environment department said the waste-to-energy recycling plant could take longer than expected to be set up.

In October 2018, City Hall said it intended to convert the Dandora dumpsite into a recreational park after it is decommissioned.

This was one highlights of the County Annual Development Plan 2020-21.

Still in October, City Hall announced it had signed a deal with Denmark's Environment Protection Agency and the 2030 Water Resources Group to manage waste.

Head of division at the Environment Protection Agency Annette Samuelsen said Denmark was willing to work with Nairobi in implementing a modern solid water management system and dealing with industrial waste.

Nothing has been heard of the deal since then.

In March this year, NMS Boss  Mohammed Badi said there are long-term plans to set up a waste-to-energy plant at the dumpsite to considerably reduce the amount of waste.

“It is to be spearheaded by the Ministry of Energy through Kengen," he said.

Initially, NMS had projected a Public-Private Partnership but said the Ministry of Energy had agreed to build the factory in Dandora to ensure it can harvest the energy for the grid.

If the project succeeds, Nairobi will join Durban, South Africa, and Addis Ababa in Ethiopia generating electricity on a large scale from the garbage.

But will NMS be able to shut down Dandora dumpsite by February?

With six months a very short time, closing Dandora appears to be a tall if not impossible order.

NECC secretary Dr John Chumo said if NMS has the will, they they could sort the dumpsite problem as directed by the court.

“With goodwill, nothing is impossible," he said. "It is high time some of these issues are handled in court for people to see how serious they are."